There is significant pressure on South Carolina Gov. Mark Sanford to resign office and slink away. He’s not helping the national Republican brand, nor the South Carolina Republican Party. My view is he shouldn’t resign. Why? 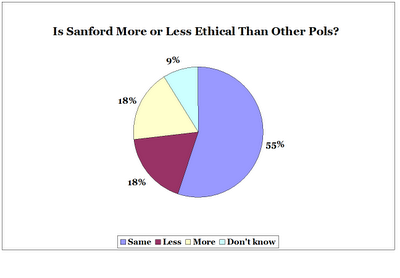 Let’s start with the puzzled, even cryptic, views of the people who should have the most say in the matter: South Carolinians. According to a recent Rasmussen poll, when asked if Sanford is more ethical, less ethical or ethically about the same as other politicians, those responding “more” and “less” cancel each other out at 18 percent each. Of the remaining 64 percent, 55 percent say Sanford is about the same as other politicians. So, overall, no better but no worse–typical pol, that is.

And yet 46 percent in the same poll say he should resign. Even if that 46 percent contains all of the 18 percent who view Sanford as less ethical than other pols, there’s still a big chunk of South Carolinians who want him to resign even though he’s just like all the rest of ’em. But that means the only difference between Sanford and the rest of those ethically-challenged pols is that he got caught. 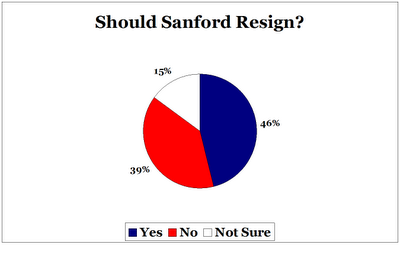 In my Baltimore Sun column today, I consider this latest stumble by a conservative Republican to be a real opportunity to commence a new era in public attitudes toward the private behaviors of their elected officials. After a quick catalog of politicians on both sides of the aisle tripped up by sex scandals, I argue that:

…the real potential upside of the spate of such incidents that have befallen Republicans is that it may finally persuade conservatives – especially those who proclaim to believe in redemption – to help forge a Chinese wall for politicians, separating their personal and public conduct.

When that happens, only the prurient and the puritanical will continue to insist upon the relevance of private behavior to public performance…

I oppose most of what Mr. Sanford stands for politically. His showy rejection of federal stimulus money targeted for his state was a crass publicity stunt designed to garner national attention for Mr. Sanford at the expense of his constituents, many of whom are struggling economically.

Slick posturing of this sort, rather than his painful and at times painfully honest public confession last week, are reason enough to hope his presidential ambitions end at the ballot box in 2012, either during the Republican primary or in the general election.

Should Mr. Sanford’s ambitions founder on the shoals of a personal scandal, however, yet another opportunity will be lost to establish the long-overdue separation between private comportment and public service. So here’s hoping he doesn’t resign or, if he does, it is a matter of personal choice rather than him bowing to political pressure.

Is Sanford a cad for bolting his family on Father’s Day weekend? Of course, but that is a private, moral failing, rather than a failure of public duty. Did he act irresponsibly in his public role as governor by not making sure he was easy to reach and readily available to return to the state if some emergency occurred? Certainly, and if that behavior is judged as a fatal by citizens of his state, fine, because at least they are judging him on his (mis)management of public business by leaving the state in the lurch. (Frankly, I wish he had handled his travel plans and public communications situation differently so this argument against him could be removed, but it is what it is.)

But if he resigns because of the political optics, yet another opportunity will be lost to build that Chinese wall.