Rahm Emanuel needs to win an outright majority in Tuesday’s Chicago mayoral election to avoid a runoff. If he fails, his setback may be due partially to his support for Chicago’s red-light cameras, which are so unpopular that a solid supermajority of residents (66 percent) call them a bad idea.

The red-light cameras have drawn criticism for spikes in the tickets issued at certain intersections, a possible increase in accidents at formerly low-incident lights and a $2 million bribery/kickback scandal.

But for Chicago drivers, it may be the nickel-and-diming that hurts the most. As reported by the Chicago Tribune, the city made several modifications to the standard formula used to set minimum yellow-light change times, all of which shorten the duration of yellow lights and increase the chance a driver will run a red and pay a fine.

Additionally, Chicago chose to calculate yellow intervals by using the posted speed limit as the approach speed. The preferred approach speed, according to the Federal Highway Administration is the 85th percentile speed used by real drivers. Approach speed may also be set by adding 5 mph to the posted limits.

But Chicago chose a less generous option for both these variables. The slower the posted speeds are than the actual speeds, the more likely it is that drivers will be hit with a fine.

When the California Traffic Control Devices Committee reviewed its yellow-light policies, the report found that, in the city of Costa Mesa, 80 percent of posted speed limits were lower than the actual 85th percentile speed. The average discrepancy was 2.78 mph.

To model how much time Chicago’s adjustments might be costing drivers, I built three models of how long Chicago yellow lights would be if the city’s calculations resembled that of other municipalities. 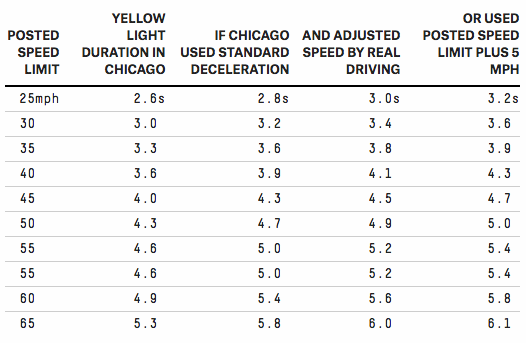 These intervals reflect the minimum duration of a yellow light, but for the purpose of issuing tickets, cities often add a cushion, not penalizing drivers who pass just after the light changes. Chicago chose to use a small cushion of 0.1 seconds, compared to New York’s 0.3 second grace period.

In the best-case scenario for drivers, if a city set yellows by adding 5 mph to the posted speed limit, stuck to the standard deceleration rate, and used New York’s more generous grace period, drivers would gain an extra 0.8 to 1.1 seconds before a fine was triggered. Even more conservative adjustments (adjusting only the deceleration rate) add 0.2 to 0.5 seconds.

Those small increments can make a big difference for drivers and municipalities. When California conducted its assessment, it found that increasing the yellow timings in San Diego “by only 1 to 1.5 seconds, would decrease the number of tickets issued by the cameras from about 3,000 per month to less than 500.” The change they produce in vote tallies remains to be measured.

CORRECTION (Feb. 25, 10:26 a.m.): A previous version of this article gave an incorrect unit of measurement for deceleration rates. It is feet per second squared.