It is unclear whether Barack Obama’s Vice Presidential search team is actually consolidating its list of choices or not. But the conventional wisdom is certainly consolidating. It being a slow news day — and an equally slow polling day — let’s combine the names mentioned in four recent “short list” articles to see just what that CW says. The articles are as follows:

For good measure, we’ll also throw in the most recent odds from Intrade. 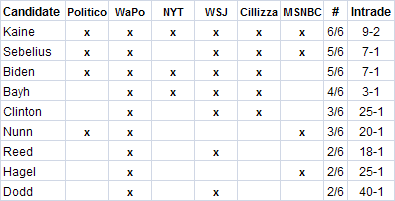 So, the media CW pretty clearly seems to be centered around four choices — Kaine, Bayh, Biden and Sebelius — probably in that order. The betting markets, which really don’t have any other information to traffic on but the media speculation, have largely followed suit.

My sense is that Obama is somewhat more likely than is implied in these articles to throw everyone a curveball. These lists are not truly independent from one another, as everyone is talking to the same sources. But that may just be my wishful thinking as a partisan, as this blog officially still has a crush on Brian Schweitzer.

UPDATE: Added two more sources: a fresh article from the Washington Post — which unhelpfully lists all nine candidates that we had listed originally — and this bit of tea-leaf reading from MSNBC.