The August break, when members of Congress go home to their districts to be screamed at (or to escape to the beach), seems like a good time to examine the broad scale of Congressional votes cast this year, comparing senators’ voting behaviors this year with how they’ve voted over their entire careers. Today we’ll look at the Senate. We’ll use as contrasting data points the 2009 Crucial Vote Scores and the Lifetime Crucial Vote Scores from ProgressivePunch.org.

Progressive Punch uses an algorithm to identify ideologically polarized votes in Congress as well as ascribe a progressive or conservative value to each yes or no position. The Crucial Votes are a subset of Progressive Punch’s compendium of all ideologically polarized votes, those in which a shift in three Senators from one side to the other would have changed the result of the vote and/or votes in which the progressives were on the losing side of the vote. 46 votes in the Senate this year have qualified as Crucial Votes using Progressive Punch’s methodology out of the 270 total. We’ve eliminated Ted Kennedy and Robert Byrd from the list because they’ve missed so many votes this year.

First, the list of senators whose 2009 Crucial Votes progressive scores are at least 5 percent lower than their lifetime averages: 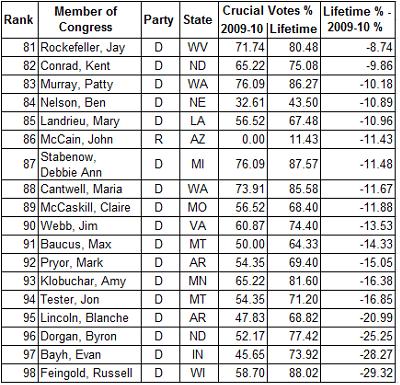 Interestingly, all are Democrats, except John McCain. Russ Feingold is the leading civil libertarian in the US Senate (although someday Al Franken may give him a run for his money) and he’s an ardent opponent of most military intervention in other countries. But he’s also tight fisted when it comes to spending cash and many of the ideologically polarized votes this year have been around spending (multiple bailout votes, TARP, etc.) and when it comes to spending money Feingold will cheerfully line up with the Republicans. As many people in the blogosphere have observed Evan Bayh seems to have appointed himself to be the new Lieberman, regularly carping about Democratic positions in the Senate in public every chance he gets. His Lifetime Crucial Votes score was low to begin with, and at 45.65% this year he’s siding with Republicans more than Democrats on votes where the Democrats need every single Senator they can get. Both Senators from Montana, Arkansas and North Dakota make this list. There have been votes this year prompted by the NRA that cause Senators from predominantly rural states such as these to scramble to show their allegiance to the principle that Americans should be able to carry any kind of weapon, anywhere, any time. It’s certainly possible to argue that they’re representing the majority of their constituents’ views on these votes. But these Senators’ scores wouldn’t be as low as they are if they weren’t siding with the forces that oppose significant limits on the behavior of corporate America. Baucus of Montana and Conrad of North Dakota are leading negotiations with Republicans in the direction of eliminating a public option from the final health care bill that will emerge from Congress. As the Democrats have gained 15 seats in the last two elections, the sSenators from these three states along with similarly conservative Democratic senators such as Claire McCaskill have formed a new drag-their-heels fulcrum in the Senate. Collectively they represent a force that their more liberal colleagues can’t ignore. Patty Murray and Maria Cantwell of Washington are still social and environmental liberals. But when the rubber meets the road and it looks like some of their votes might directly or indirectly cause their most affluent constituents (think Microsoft millionaires) to pay more taxes, they’ll defect and vote with the Republicans.

Now for their counterparts — the list of Senators whose 2009 Crucial Votes progressive scores are at least 5 higher than their lifetime scores, meaning that they’ve become more liberal: 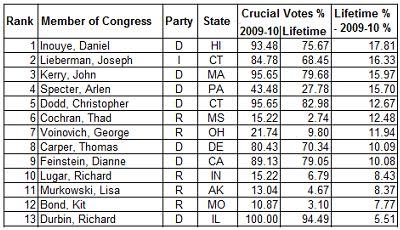 Based on his last reelection where the Republican got less than 10% of the vote and Democrat Ned Lamont almost defeated him, “Independent Democrat” Joe Lieberman apparently views his left flank as his most vulnerable one and has shifted accordingly. Inouye is voting strongly with the hometown Hawaiian favorite, Barack Obama. He’s a Democratic party loyalist, at least when there’s a Democratic party president and his voting record reflects that. Kerry is showing up to vote more than he has in the past. His missing of votes in previous years had dinged his Lifetime score. Nate Silver has already examined Arlen Specter’s changed voting behavior in great detail – he’s more afraid of Sestak than Toomey. Christopher Dodd is a garden variety liberal Democrat who at the same time has always displayed great allegiance to some of the major industries whose headquarters and/or large facilities are located in Connecticut, e.g. aerospace and insurance. His name has been so tarnished by his receiving special favors on the interest rates he pays on his home mortgages etc. that he seems to be making a concerted effort to vote a liberal/labor line on all economic issues in contrast to his previous voting record. Voinovich and Bond would appear to be liberated from the need to placate right wing voters who dominate in Republican primaries by the fact that they’re both not running for reelection. I have no explanation of what’s going on with Thad Cochran; any readers’ ideas would be welcome.

The remaining 67 Senators are voting pretty much in line with their career averages (or, in the case of the freshman senators, their lifetime scores are necessarily the same as the same as their 2009 ones.)

Go here to view Progressive Punch’s ratings for all ideologically polarized votes in the Senate. And if you’re in Pittsburgh for Netroots Nation later this week, come by the Progressive Punch booth and say hello and tell us what you love (or hate) about our methodology.