Sharron Angle convincingly won yesterday’s Republican US Senate primary by 14 points, 40 percent to 26 percent, over her next closest pursuer, Sue Lowden. For Lowden to win, she needed big support in Clark County, home to Las Vegas and easily the state’s biggest county. But Angle even beat Lowden there, 38 percent to 30 percent, by a vote margin of 7,347 votes.

But even if Angle had lost Clark to Lowden by 7,347 votes–a net swing of 14,694 votes in a primary in which a total of 175,671 votes were cast–Angle still would have held off Lowden by about 10,000 votes statewide. And that’s because not only did Lowden lose Clark, and also lose all but one of Nevada’s other 16 counties to Angle,* but Clark County had a rather dismal turnout relative to the state’s mostly small, rural counties. (*Lowden nudged out Angle in Eureka County, 134 to 111.) 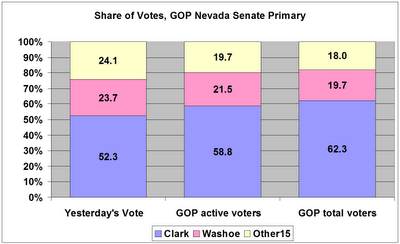 The figure above compares the share of total votes cast yesterday by county with the shares of active registered Republican voters and total Republican registered voters, as reported by the Nevada Board of Elections after the the close in May of registration for the June primary. Though Clark County is home to 62 percent of all Republicans and 59 percent of active Republicans, yesterday Clark County produced just 52 percent of votes in the Republican primary. Put another way, the scandal- and blunder-plagued Lowden not only fared poorly in Clark, but Clark countians did not keep up with the Republican turnout in the state’s smaller counties.

This fact helps explain why the results in Clark could have been reversed between Angle and Lowden and Angle still would have won: She racked up sometimes huge margins in 15 of the other 16 counties. Holding aside Clark and the eight really small Nevada counties–Esmeralda, Eureka, Lander, Lincoln, Mineral, Nye, Storey and White Plain, in which Republicans cast a total of fewer than 1,000 votes–Angle’s head-to-head vote shares in Washoe and what we might call Nevada’s remaining seven “medium-sized” jurisdictions were quite impressive. Take a look: 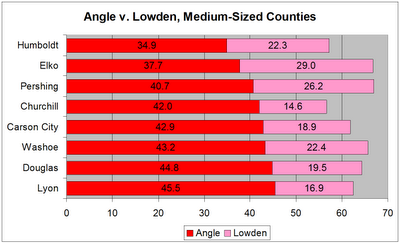 As you can see, in all but Humboldt and Elko counties Angle outperformed (and thus pulled up) her statewide 40 percent share. And her 21-point victory in Washoe–the second largest jurisdiction and home to Reno, which Angle represented in the state assembly–proved to be huge for her. In short, this win has the hallmarks of a tea party victory, with those Republicans from outside the population centers in particular turning out and contributing significantly to Angle’s victory.

Looking ahead to the general, Angle has called for dumping Harry Reid; meanwhile, the Senate Majority has drawn the general election match-up he wanted. This is going to be one fun race to watch, folks.