Pimps make close to a million dollars each year, if you can trust the information gathered from 73 of them. A report released Thursday also showed that the market for prostitution in seven cities totaled $975 million in 2007.

The Urban Institute used official national datasets on guns and drugs, estimated how these had changed over time and then used its own research to size up the underground sex economy. Nothing came close to prostitution. The market for illegal drugs was worth $754 million. The underground gun market totaled $750 million.

By interviewing pimps about the structure of their businesses, the researchers were able to understand much more than market size. They found, for example, that 9.7 percent of pimps accept credit or debit cards as a method of payment. Hotels and motels were the most common location for work (67 percent), followed by streets (53 percent). Transportation was the most frequently cited expenditure; 66 percent of pimps said it was one of their outgoing costs. 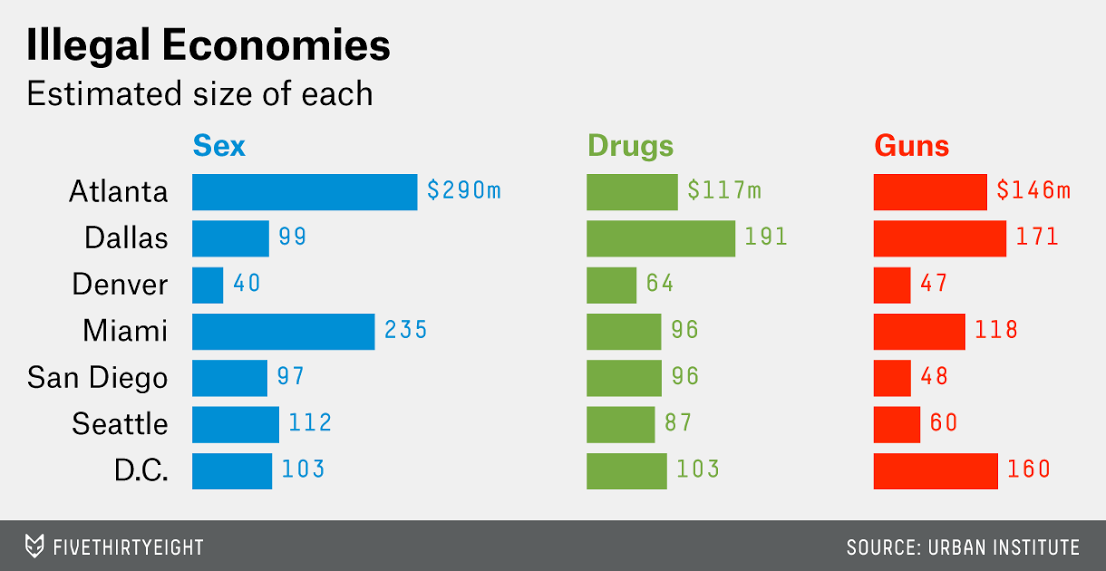 Clearly, comparing bread and brothels is no way to understand the underground economy. But do the researchers at the Urban Institute fare any better? Why were those cities chosen, and how representative are they of America’s sex industry?

The methodology is complex but creative. The researchers started out with the 100 most densely populated areas in the U.S. Then they narrowed their list to seven using factors such as how responsive law enforcement agencies were to their questions and the number of convictions for underground commercial sex in each jurisdiction.

Finding 119 public officials to speak with was tricky, but finding 142 sex workers, pimps and child pornographers was even more difficult — especially when every place except the Colorado Department of Corrections prohibited the researchers from giving convicted interviewees $10 to talk. Sex workers received a $50 gift card.

That wasn’t the creative bit though. The researchers borrowed part of their methodology from Isaac Newton’s Law of Universal Gravitation (which says that if you know the mass of two objects and the distance between them, you can figure out the gravitational pull between them). Instead of objects, they used U.S. cities, and instead of gravitational pull, they looked at the proportion of pimps who decide to work in another city. The researchers hoped that with those pieces of information, they could work out the “mass,” i.e. the size of the sex industry in each of those cities.

Here are the researchers:

Consider three cities: Kansas City, Dallas, and Atlanta. A pimp who works in Kansas City is deciding whether to also work in Dallas or Atlanta. His decision will be influenced by the distance to the potential new city and the size of its market. Likewise, pimps in Dallas and Atlanta are deciding whether to work in the other cities. With a large enough number of pimps, we can observe what portion of pimps from each city decided to go to each of the other cities and, because we know how far apart the cities are, we can infer the “pull” of each city.

Is this methodology airtight? Probably not. There’s definitely a lot of uncertainty in the report’s conclusions. But the study puts some valuable information into a space filled with misinformation. So, if you want to find out more about one of the oldest and least-documented industries in the country and you have a couple of hours to spare, the 339-page report is worth a read.