With Sunday’s U.S. Open victory, 32-year-old Serena Williams gathered her 18th major singles title — tying her with Chris Evert and Martina Navratilova for second on the all-time open-era list, behind only Steffi Graf’s 22. Remarkably, this was only Williams’s 22nd appearance in a final. Graf won her 18th Grand Slam title in her 26th final (at age 26). Navratilova didn’t win her 18th slam title until her 30th final (age 33), and Evert won her 18th (age 31) in her 33rd appearance (though, in fairness, those two had to play each other in 14 finals).

Combined with her 22-3 record in semifinals, Williams’s career win rate in the last two rounds of major tournaments stands at 85.1 percent, easily topping the list of women with five or more slam titles: 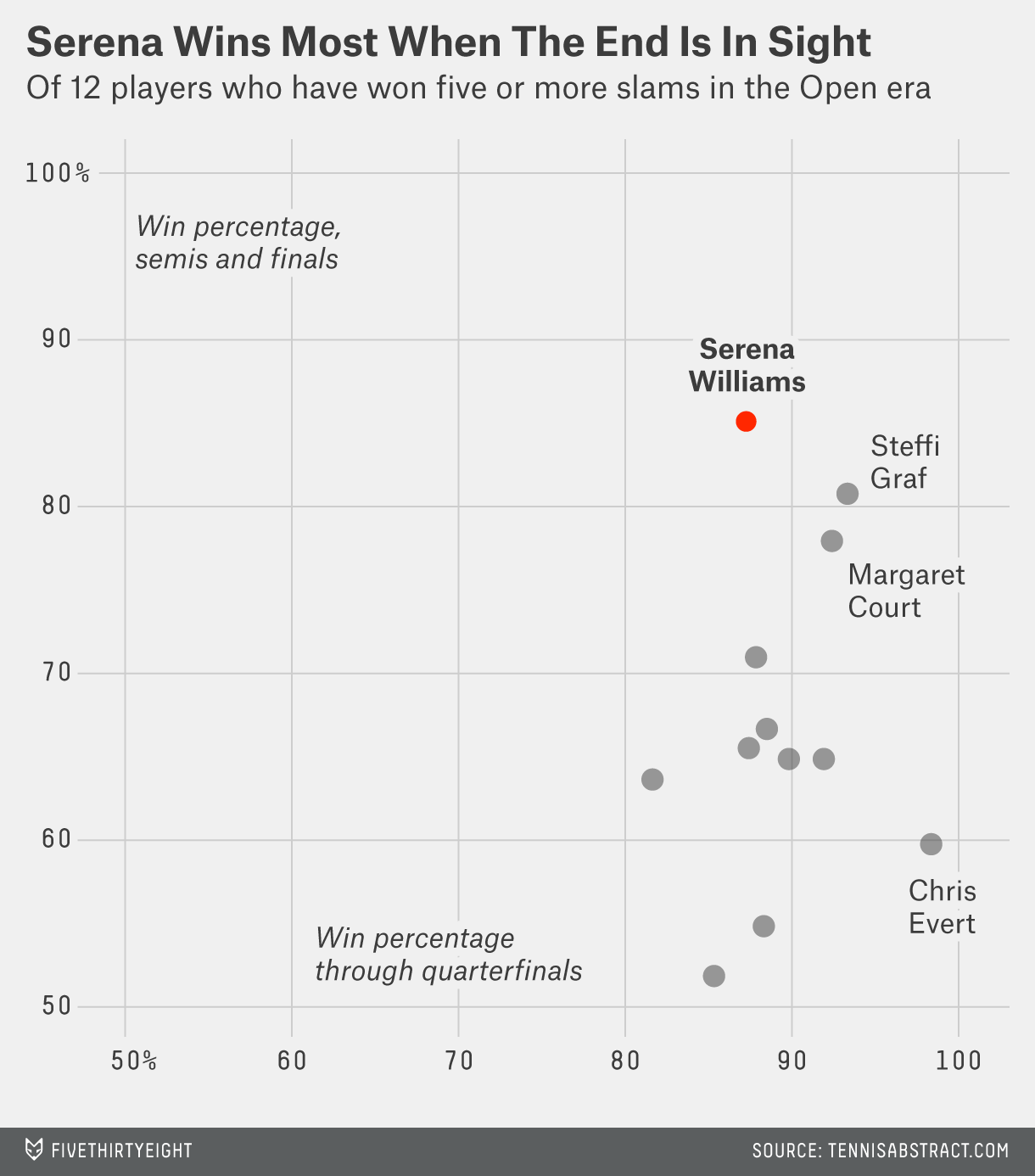 Second and third place go to Margaret Court and Graf, respectively — and then it’s daylight down to Monica Seles.

But it’s also clear in the above chart that Williams’s performance prior to the semifinals is less remarkable: She ranks only 10th of 12 on that list in win percentage in the earlier rounds (despite not yet experiencing end-of-career decline). She has more exits in the first four rounds of majors (18) than Navratilova and Evert had, combined (16).

In fact, Williams’s early-round performance is fairly similar to that of contemporary Maria Sharapova, particularly after we adjust for relative player strength. Both Williams and Sharapova have a reputation for dropping the occasional early-rounder against lower-ranked opponents. To see how often they lost to what kind of opponent, I broke the following chart down by “degree of mismatch” (techy mumbo-jumbo: the x-axis metric is the difference between the log of Williams’s/Sharapova’s seed and the log of their opponent’s seed. I treated all unseeded players like they had the No. 32 seed. This is just a better way of establishing relative strength than raw ranking difference): 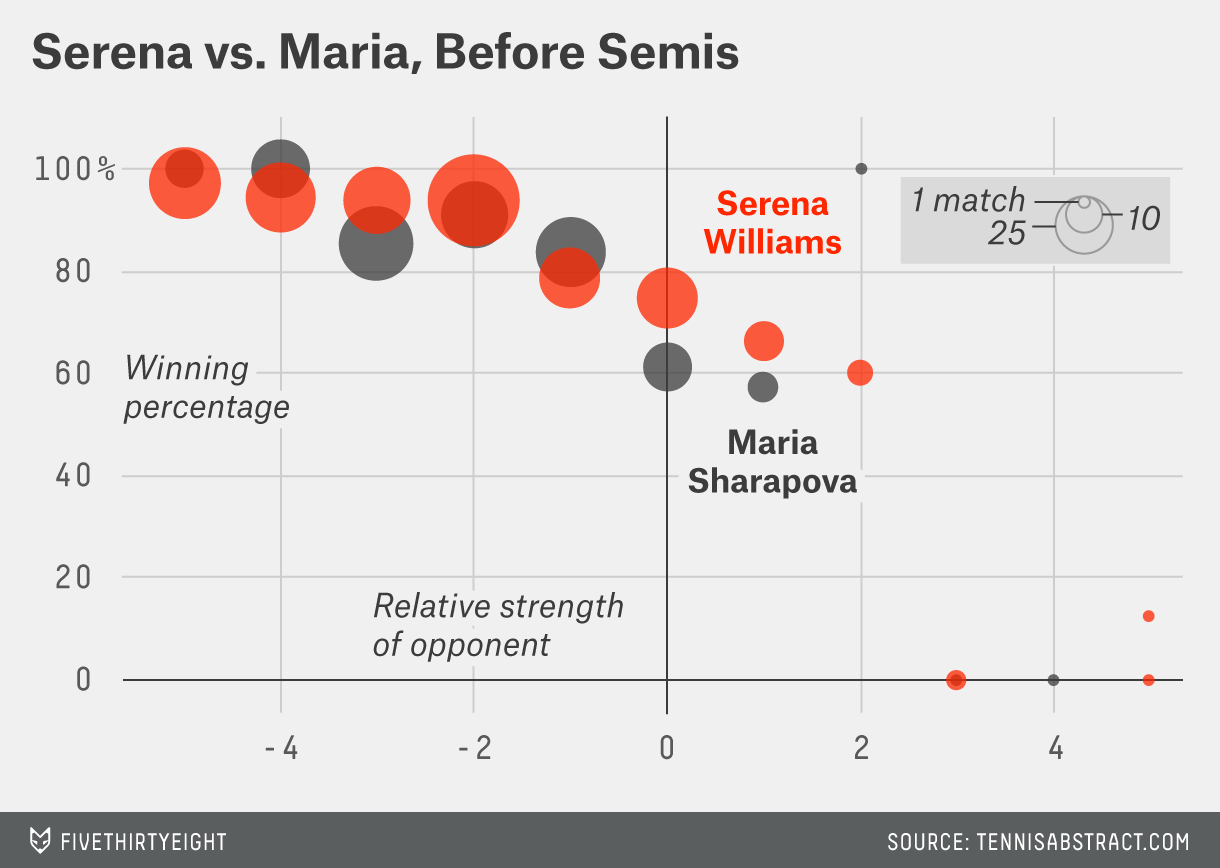 Williams does a little bit better, particularly in situations where she’s the lower seed (that’s not surprising considering her volatility), but then she takes a turn for the incredible at the semis: 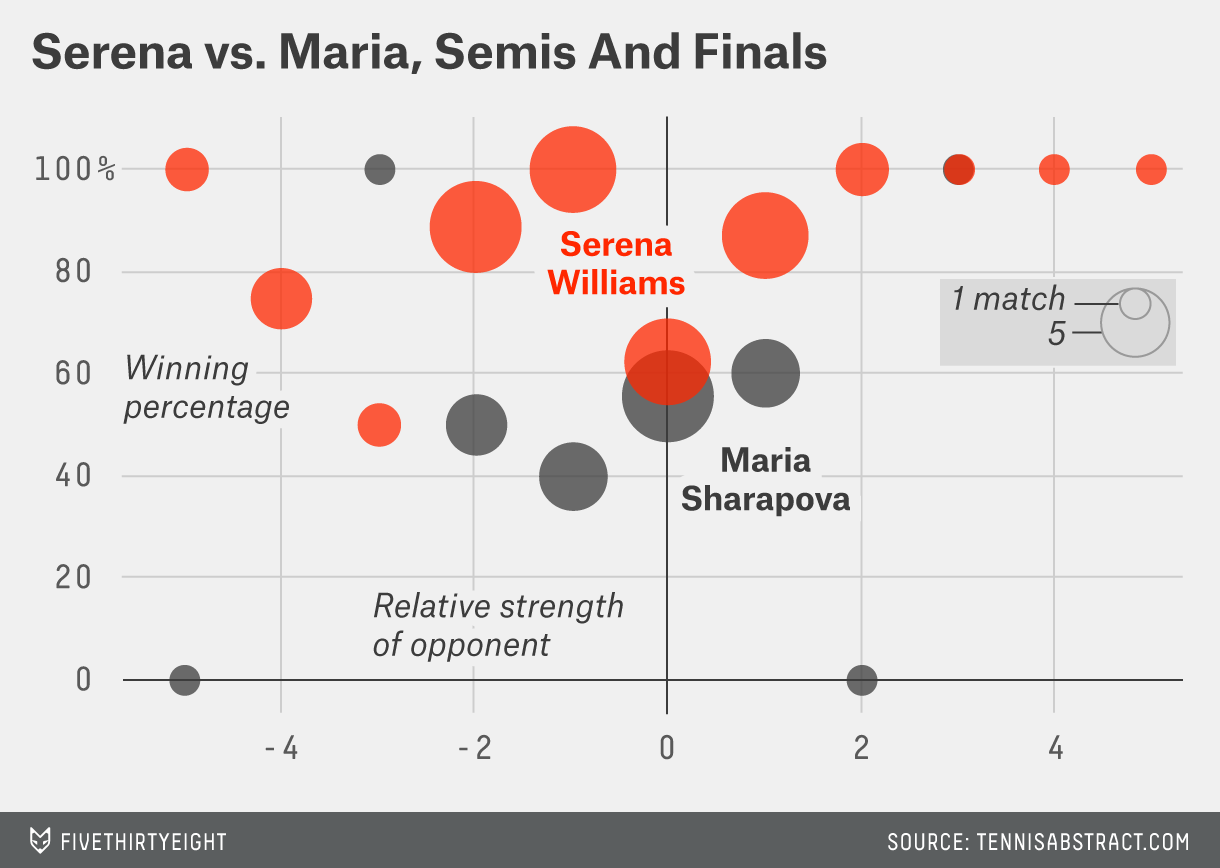 Williams is deadly when she makes it deep, regardless of ranking. Sharapova — the second-winningest player since Wimbledon 2004 — not so much.

Of course, that Sharapova has been Williams’s main competition for so long is one of the reasons to be skeptical of Williams’s finishing skills: She hasn’t had to face a Seles or an Evert, as Graf and Navratilova did (or vice versa). So using the data from the 13 women with five or more major wins, I created a model to determine some basic odds of one of these top players beating an opponent based on each player’s ranking (actually, the model ends up using both the relative seeds and the absolute seed of the opponent — apparently, for top players, their own seed is much less important). From that, we can evaluate each player’s performance not just as a percentage, but against expectation considering the relative strength of their opponents. 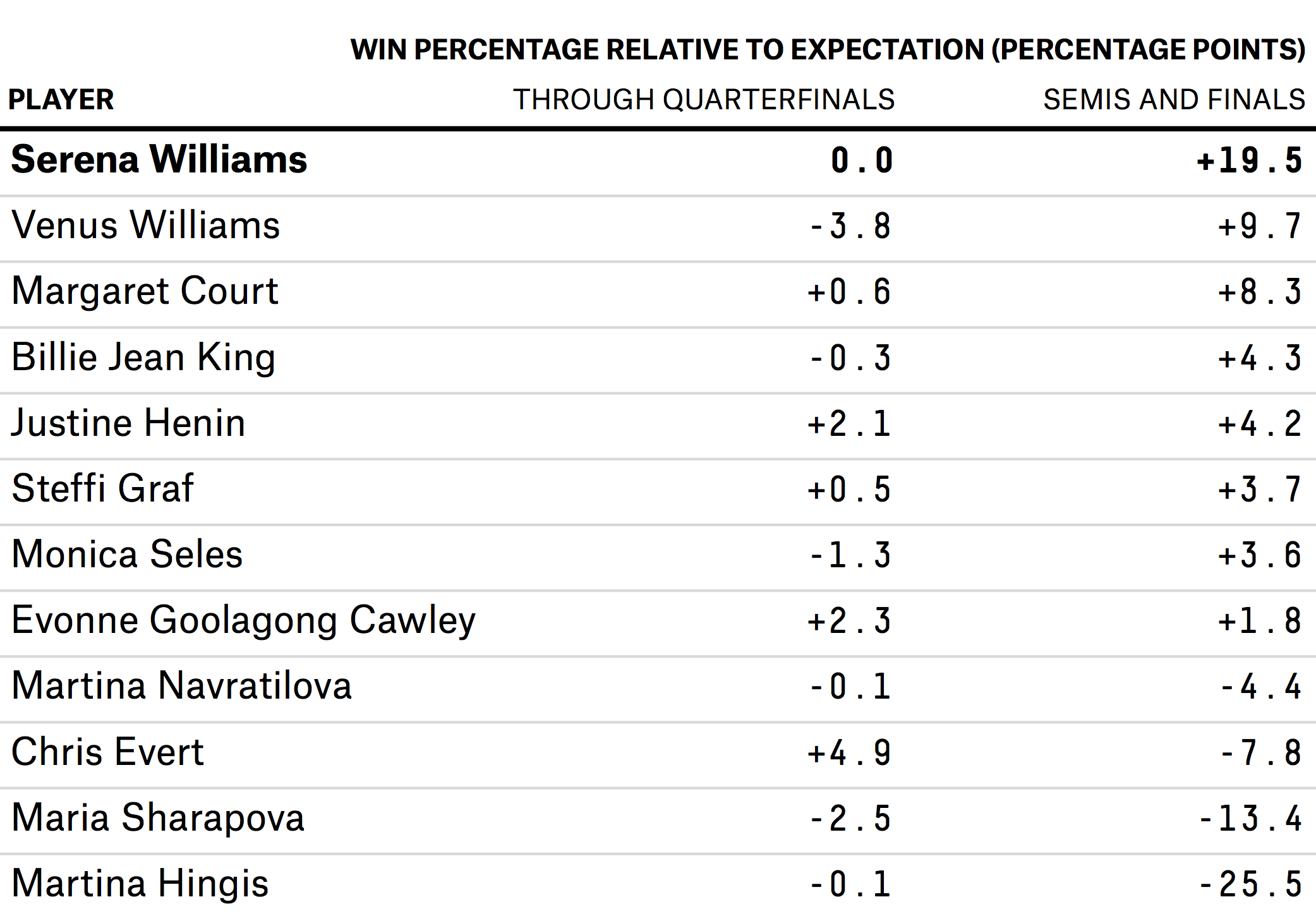 In this case, Williams has an even larger advantage than above when it comes to semifinals and finals, with a nearly 10 percent gap between herself and sister Venus Williams, with Court dropping to third, and Justine Henin taking the No. 4 spot.

Yet, prior to the semifinals, Serena Williams is almost exactly at expectation: She’s ahead of it by two one-hundredths of 1 percent.

To some degree, this has made me reconsider Williams’s career. Of course, we’ve always known she is brilliant, clearly the class of this generation and quite possibly the greatest female player of all time. But I have always assumed that she was reverse clutch — meaning that she was demonstrating clutchlike performance, but that it was probably a result of playing poorly in less-“clutch” situations (for example, if she didn’t try very hard in earlier rounds).

This may still be the case. Or perhaps some other factor explains the findings — for instance, maybe Williams’s form entering Grand Slam events varies wildly, so she either loses early or wins the title. But the longer and more consistently this phenomenon persists, the more I’m forced to consider (at least conceptually) that perhaps Williams is really just a typical great player most of the time, but actually does possess the ability to summon something extra when the pressure is on.