After beating the Texas Rangers on Sept. 3, the Boston Red Sox were 84-54. Although half a game behind the Yankees in the American League East, the Red Sox had a nine-game lead over the Tampa Bay Rays for the wild card and roughly a 99.6 percent chance of making the playoffs.

Since then, however, the Red Sox are 5-16, and following their loss to Baltimore Monday night, their lead over the Rays has evaporated into a tie.

The season isn’t over, of course, and the Red Sox do have one big advantage: their games Tuesday night and Wednesday are against the 68-win Orioles, while the Rays are playing New York. But there is obviously the potential for a catastrophic collapse.

There are different ways to measure the magnitude of pennant race collapses. One approach, which I’ve used in the past, is to calculate a team’s playoff probability after every game of the season, and to see which team had the highest probability of making the playoffs but failed to do so.

By that standard, the Red Sox collapse — if it comes to fruition — might rank as high as the second or third worst of all time, rivaling that of the 1951 Brooklyn Dodgers and the 2007 New York Mets. It wouldn’t be quite as bad, however, as that of the 1995 California Angels, who had in excess of a 99.9 percent chance of making the playoffs on Aug. 20, 1995, when they held a 9-and-a-half-game lead over the Texas Rangers in the A.L. West, and were 12 games ahead of the Yankees for the wild card, but missed the playoffs after finishing their year 12-26.

Not all these collapses were created equal, however. The 1951 Dodgers, for instance, played well enough down the stretch, going 25-24 over their final 49 ballgames, but were caught by the streaking (and possibly cheating) New York Giants, who went 39-8 over their final 47 games.

The problems facing the Red Sox, on the other hand, are mostly of their own making. Tampa Bay has not even played all that well: they are 15-10 in September, but if not for their 6-1 record against the Red Sox, they’d be a pedestrian 9-9.

So here’s another question: has any team played so well over the first five months of the season — and then so poorly in the last one?

Baseball has operated on somewhat different schedules over the years, with the regular season ending anywhere from about Sept. 25 to Oct. 7, so instead of looking at dates on the calendar, it is probably best instead to see how teams performed over a fixed number of games. Specifically, we’ll look at how teams played in their final 25 games of the regular season as compared to their record before that.

Depending on how their remaining games go, the Red Sox could finish anywhere from 8-17 to 5-20 in their final 25 games. (The latter scenario would involve them losing both Tuesday and Wednesday and again in a one-game playoff against Tampa on Thursday).

A quick visual inspection of the data reveals that in either case, but especially the 5-20 scenario, Boston’s performance would be quite an outlier. 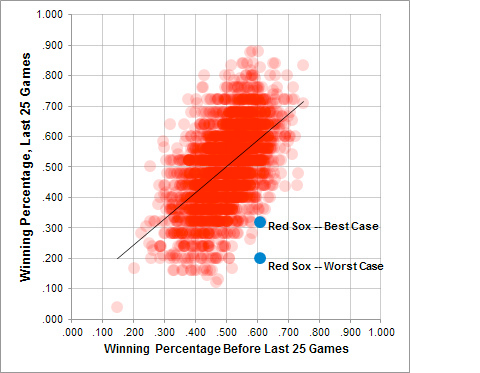 Teams have finished their years with a 5-20 record before. They’ve ended it as badly as 1-24, in fact, as the infamous 1899 Cleveland Spiders did. (The Spiders entered their final 25 games with a 19-110 record, so the performance was pretty much in character.) But these were not teams that were winning 60 percent of their games before that, as the Red Sox had been.

Instead, the team with the worst finish to the season among those that had played .600 baseball beforehand was the 1969 Chicago Cubs. They started their year 84-53 but finished 8-17, turning a five-game lead over the New York Mets into an eight-game deficit. (I limit the analysis to cases where teams played at least 140 games during the regular season.)

So even if the Red Sox win their final two games, they will still match the 1969 Cubs for late-season futility — the team that, prior to the Bartman Ball, had been most closely associated with the franchise’s alleged curse.

We can also expand the analysis to include all teams that were in playoff contention, regardless of their record at the time. Specifically, we’ll look at all teams that either held a playoff spot with 25 games remaining, or were within 3 games of the division or wild card leader.

There’s one other, possibly superfluous wrinkle. In projecting what a team’s record “should” have been over its final 25 games, we’ll account for the fact that there is some luck in baseball, and that even after five months’ worth of regular season games, it may not entirely even out. For instance, based on regression analysis, a team that had a .650 winning percentage over its first 137 games would be expected to do just a bit worse than that — a .629 winning percentage — over its remaining 25. So in comparing a team’s actual record over its 25 games to the one we might have expected, we’ll account for this very modest reversion toward the mean. 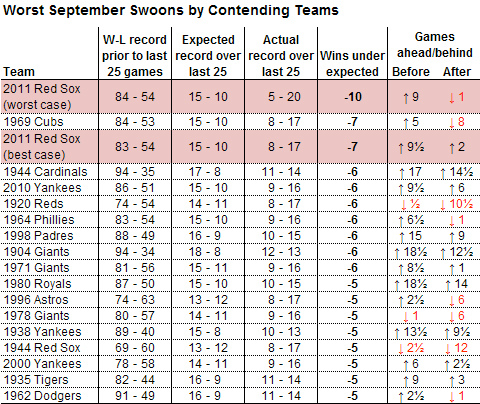 As we mentioned, however, the 1969 Cubs represent the best case scenario for this year’s Red Sox. If the Red Sox sweep their remaining games, they too will have underperformed expectations by seven wins — but they could finish as many as 10 wins off their projected pace. The latter scenario would represent 3.5 standard deviations below expectations, something which has about a 1-in-4,500 chance of occurring over the long run.

The Red Sox could also own the distinction of having the worst finish (relative to expectations) of all teams, whether or not they were in playoff contention. For the time being, the record is held by the 2002 Orioles. The 2002 Orioles were not among the more glorious Baltimore teams, but they had not played horribly and were expected to finish the regular season 12-13. Instead, they went 3-22, a nine-win under-performance. But the Red Sox could end their season as many as 10 wins below par. 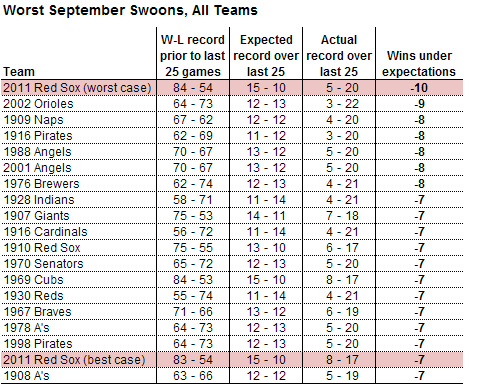 So the Red Sox indeed have the chance to accomplish something historic — and not in the way that their 2004 World Series victory was historic.

As to why this is occurring … well, when things go this badly, there are usually several factors in play. The Red Sox have had some injuries to contend with. And they have had a bad habit recently of winning some blowouts, but losing close games (something which tends to even out over the long run). Thus far in September, they’ve been outscored 135-160, which is not good, but which would ordinarily translate into about a 10-14 record, and not the 6-18 mark that they’ve actually posted.

But here’s one thing I’ve noticed, although it will be controversial to the “Moneyball” crowd. The Boston pitchers may be choking.

So far in September, Red Sox pitchers have struck out 202 batters while walking 107 in 218 innings. They’ve given up 227 hits and 29 home runs over the month.

Those aren’t great numbers (the strikeout total is quite good, actually, but the other figures are mediocre). But they’re not so bad that you’d expect a team to yield 6.5 runs per game, as the Red Sox have so far this month.

The problem is that the Red Sox pitching and defense have given up a lot of big, untimely hits — like the three-run, inside-the-park homer by Oriole journeyman Robert Andino last night. And the problem seems to date from the time when the pressure really rose on the Red Sox, following their three-game sweep at the hands of the Rays over Sept. 9-11.

In the 14 games since then, the Red Sox have given up 88 runs — when their raw pitching stats would ordinarily project about 71 runs yielded instead. The difference amounts to more than 1 run per game over this period, during which time the Red Sox have gone 1-5 in games decided by two runs or fewer.

Your first instinct might be that this has to do with the relative quality of Boston’s starting pitching and bullpen, but the bullpen has actually performed comparatively well: it has a 4.37 E.R.A. so far in September, while the team’s starters are an abysmal 7.17. And the team had not exhibited this pattern — the actual number of runs allowed exceeding the expectation from the component stats — prior to the last few weeks.

It also might be a fluke. If a seemingly good team has gone 6-18 during a month, you won’t have to dig around too long before you find some anomalous numbers that help to explain the result.

Still, the trend is highly statistically significant, and Red Sox pitchers have given up more runs than expected from their raw statistics in 12 of their past 14 games. In other words, they’ve pitched poorly in the clutch.

Most studies suggest that clutch hitting is way overblown, and although there’s been less examination of clutch pitching, the available evidence tends to point that way as well.

But pitchers have a lot more time to psych themselves out than hitters do, who must react to each pitch in a fraction of a second.

And pitchers do not usually face the circumstance of pitching in baseball-rabid Boston in a pennant race, with their team on the verge of an historic collapse.

Perhaps in this case, psychology does play some role. Or maybe it’s just bad luck. The Red Sox will need to win Tuesday and Wednesday to ensure that this is an academic discussion.