We’re reaching the point of diminishing returns in analyzing Mitt Romney’s convention bounce. But we can say two things almost for certain. First, Mr. Romney very probably got a bounce. And second, it’s a below-average bounce by historical standards.

What’s trickier to figure out is whether the bounce failed to live up to reasonable expectations, in a way that ought to reduce the odds we’d assign to Mr. Romney winning the election in November.

First, let’s try a simple way of measuring the bounce. In the table below, I’ve included every poll that has been released since Mr. Romney’s acceptance speech last Thursday which also released a preconvention baseline for comparison.

There is some noise in this data: Mr. Romney gets everything from a seven-point bounce (in a Public Policy Polling survey of Michigan) to what technically is an “anti-bounce” of negative two points (in the Gallup national tracking poll). But if you just average the polls together, it comes out to a three-point gain. 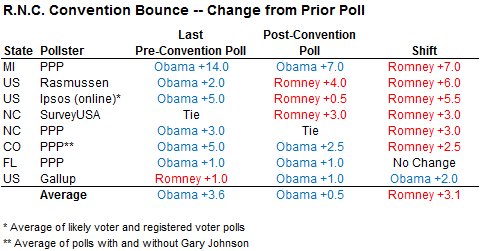 A slightly more robust method is to compare the current polling against the long-term trend in each survey. Since the polling has been very, very stable since May 1, I’ve simply averaged together all the surveys that the polling firm has conducted between that time and the start of the convention.

In this version, for instance, we’re comparing Mr. Romney’s current lead of four points in the Rasmussen tracking poll against where that poll has normally had him, which is one or two percentage points ahead — rather than against their poll immediately before the convention, which had Barack Obama up by two points.

Ultimately, however, this doesn’t make too much difference: Mr. Romney’s bounce registers as being about two and a half points rather than three. 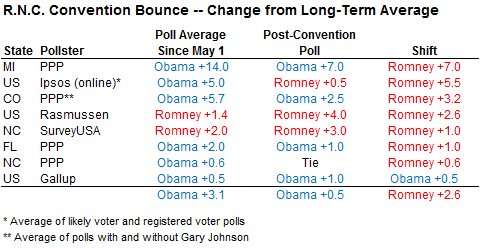 Still, a bounce somewhere in the two-to-three-point range looks about right. Or if you want to play it safe, since we may still get a few more polls on this, it’s probably somewhere in the range of one to four points.

That’s a small bounce by historical standards. If we take Mr. Romney’s bounce to be two and a half points, it would be the third-smallest for a challenger since 1968, behind John Kerry in 2004 (roughly one point) and Mr. Obama in 2008 (about two). By contrast, the average bounce for the challenger since 1968 is around eleven points.

But do you notice a pattern here? The three smallest bounces for the challenging candidates came in the last three elections. Bounces aren’t what they used to be, perhaps because voters are saturated with information months in advance of an election, increased partisanship and sterilized conventions that may have become too polished for their own good.

The catch is that each of these things is a structural factor, and therefore might predict that Mr. Obama won’t get much of a bounce either. Maybe this is just the new normal; the assumption that our forecast model had made in advance of the convention was that Mr. Romney would get only a four-point bounce.

And yet: the incumbent party did itself some good in each of the last three conventions. In 2000, Al Gore pulled ahead of George W. Bush after having trailed him for most of the year. The lead went back and forth in the stretch run of that race, eventually leading to an essentially tied result.

In 2004, Mr. Bush pulled ahead of John Kerry after the conventions — Mr. Kerry had led for much of the summer — and never relinquished that lead. This is the “glide path” that I’m sure Mr. Obama’s campaign team is hoping for: pull ahead by five or six points after the convention, expect Mr. Romney to cut that to around three points by start of the baseball playoffs, but eventually win a slow-and-steady race that the pundits will describe as “never quite as close as it looked.”

In 2008, the incumbent Republicans had their best stretch in the polls after the convention. In a way, this is a favorable precedent for Mr. Romney as well. Since 1968, the 2008 election was the only year when the challenger (then Mr. Obama) eventually finished with a larger margin of victory than in the polling immediately after his convention.

So I’m a bit torn between the “par” and “bogey” interpretations of the convention for Mr. Romney. It was clearly not a total loss. His campaign has been largely on-message since it left Tampa. There are signs that Mr. Romney’s favorability ratings have perked up a bit, along with his standing among Latino voters.

(Speaking of which, there are the Republican Party’s 2016 prospects to consider: Marco Rubio made a very good debut on the national stage. That he gained stature relative to both Paul D. Ryan and Chris Christie, whose speeches got more mixed reviews, may have been the most important thing to happen in Tampa.)

At the same time, Mr. Romney was trailing in the race — narrowly — heading into the convention. What he really wanted was a birdie, and he didn’t get one.