The FiveThirtyEight forecast was essentially unchanged on Monday, with Barack Obama holding a 77.7 percent chance of winning the Electoral College.

Mr. Obama received a number of strong-looking state polls on Monday, including some from firms that had him with mixed numbers before. Probably the most noteworthy of these was a Wisconsin poll from the firm We Ask America, which put Mr. Obama ahead of Mitt Romney by 11.5 percentage points there.

Recent polls have shown everything from a near-tie in Wisconsin to a 14-point lead for Mr. Obama. But on the whole, the data suggests that Mr. Obama has gained more ground in Wisconsin than in other states since the conventions — perhaps because they may have nullified a bounce that Mr. Romney had received in polls of Wisconsin in August following the selection of Representative Paul D. Ryan as his running mate.

Still, if the set of state polling was strong for Mr. Obama on Monday, the same has been true on most days over the past week or two. Further, in some of the swing states, there have been as many as a dozen poll releases since the convention, meaning that any one new poll usually won’t shift the FiveThirtyEight forecast all that much, especially if the firm conducting the survey is rated as being of middling quality.

That’s not to say that further state polling data will never move the numbers — but reasonably strong state polling for Mr. Obama is already “priced in” to the model at this point.

State polls can be used to make inferences about where the national race stands, and our program reads the collective sum of the state-level data as implying that Mr. Obama has just slightly more than a 5-point lead in the national race right now.

By contrast, national polls seem to suggest that Mr. Obama’s lead is more on the order of 3 or 4 points.

Because most of the state polls are from swing states, most people just take that to imply that Mr. Obama has some sort of Electoral College advantage relative to his standing in the popular vote.

The forecast model does not necessarily buy that story, however, for the following reason: Mr. Obama’s state polls have also looked reasonably strong recently in noncompetitive states. For instance, a number of recent polls have shown him making gains in states like California, New York and Massachusetts, which have large populations but where Mr. Obama can gain no more electoral votes by winning by a wider margin.

What about these states’ opposite numbers — those that are almost certain to go Republican? If Mr. Obama were doing especially poorly in large-population red states like Texas, Tennessee and Georgia, that would mean that Mr. Romney had a lot of wasted votes, perhaps giving Mr. Obama an Electoral College advantage.

Many of these deeply red states have rarely been polled. But when there have been surveys taken, the numbers have sometimes been surprisingly “good” for Mr. Obama.

I put good in quotation marks because Mr. Obama is almost sure to lose almost all of those states (he could win Missouri and Arizona in a blowout). However, the polls in these states have not suggested that much of a drop-off for Mr. Obama from 2008, when he won the race by 7 percentage points nationally.

In some of these states, in fact — like Kentucky and Tennessee — recent polls have shown Mr. Obama running better than he did in 2008. There are others, like Georgia, where Mr. Obama’s numbers have been poorer lately. The totality of the evidence from these states, however, seems to be most consistent with a 5- or 6-point national lead for Mr. Obama on the assumption of a uniform national swing — about the same as in the swing states. 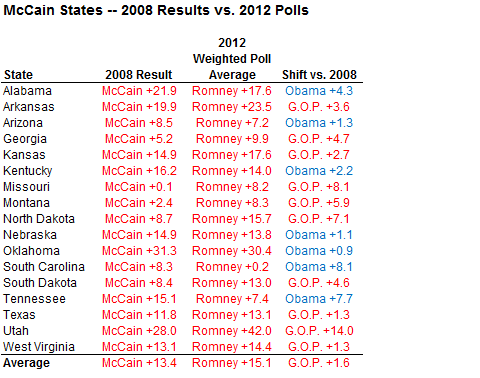 The way the forecast model is designed, it’s primarily looking at the differences between the polls in these different types of states in order to determine whether a candidate has an advantageous position in the Electoral College relative to his position in the popular vote.

If Mr. Obama were running close to his 2008 levels in the swing states, for example, but his numbers were well off that pace in deeply red and deeply blue ones, the model would give him such an Electoral College edge.

However, we do not really see that. Instead, it’s just that the state polls as a whole seem to tell a slightly different story than the national ones do – regardless of whether the state polls were conducted in swing states or in noncompetitive ones.

So instead, the model adjusts Mr. Obama’s national polls slightly upward, and his state polls slightly downward, in order to bring them into equilibrium. My research on the polling from past presidential elections suggests that it is not necessarily uncommon for state polls and national polls to tell a slightly different story about the state of the campaign, and that looking for some sort of compromise between them is the best strategy.

Still, it would help to get more polling in the states that John McCain won in 2008. They aren’t relevant to the Electoral College in a direct way — but they are important in helping us to understand the overall relationship between state and national polls.

An earlier version of a chart with this post misstated the winner of some states in 2008. They were won by John McCain, not Mitt Romney.