President Obama’s position inched forward in the FiveThirtyEight forecast on Thursday. His chances of winning the Electoral College are 76.1 percent, according to the forecast, up from 75.2 percent on Wednesday. Mr. Obama’s projected margin of victory in the national popular vote also increased slightly, to 3.4 percentage points.

By and large, the story that Thursday’s polls told was the same one as on Wednesday. Mr. Obama continues to get very strong results in state polls that use industry-standard methodology, meaning that they use live interviews and place calls to mobile phones along with landlines.

In the 10 states that have generally been ranked the highest on our tipping-point list — Ohio, Virginia, Florida, Wisconsin, Colorado, Nevada, Iowa, Pennsylvania, New Hampshire and Michigan — there have been 21 such polls since the Democratic convention ended. Mr. Obama has led in all 21 of these surveys — and usually by clear margins. On average, he has held a six-point lead in these surveys, and he has had close to 50 percent of the vote in them.

Mr. Obama’s results have been more varied among polling firms that use different methodologies. A series of polls in eleven swing states, released on Thursday by the online firm YouGov, were fairly strong for Mr. Obama, putting him ahead among likely voters in all of the states except North Carolina.

I don’t mean to keep repeating this point about polling methodologies, but it really does seem to be the easiest way to unpack the state-level data right now. 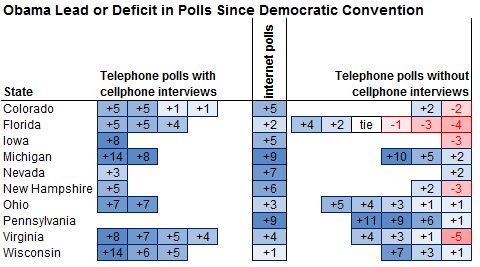 If Mr. Obama’s lead is five or six points in the typical swing state right now, then Mitt Romney will probably need some sort of external contingency to give him much of a chance at winning.

If Mr. Obama’s lead is more like two points instead, then routine factors like the debates or economic reports could more easily put Mr. Romney ahead, although obviously there would be no guarantees.

Although the forecast model weighs polls from the stronger polling firms more heavily, it continues to project something of an in-between result — in part because the national polls seem to have gravitated more toward the range of a three- or four-point lead for Mr. Obama, and in part because it continues to assume that Mr. Obama could still be experiencing a modest afterglow from his convention that will subsequently fade.

But isn’t Mr. Obama’s convention bounce declining already? It sure seemed to be the case a couple of days ago — but now the evidence has become more ambiguous.

The most powerful argument that Mr. Obama’s convention bounce is fading — or perhaps has already faded — is the Gallup national tracking poll, which showed the race reverting to a tie on Thursday after once having given Mr. Obama a seven-point lead.

Gallup is one of four national tracking polls, however, and the others tell a variety of stories, none of which are exactly consistent.

In the Rasmussen Reports tracking poll, Mr. Obama’s numbers faded sharply late last week, but they have since rebounded. In Thursday’s version of that poll, he held a three-point lead over Mr. Romney when voters who leaned toward a candidate were included.

In the Ipsos online tracking poll, Mr. Obama’s numbers have fluctuated some, but he remains five points ahead among likely voters — only slightly off his peak. (The survey also put Mr. Obama 10 points ahead among the broader universe of registered voters.)

In the RAND Corporation’s tracking poll, Mr. Obama lead has expanded slowly but steadily. In fact, he reached his highest level of the year on Thursday, with the survey giving him a 5.4 percentage point advantage among likely voters. 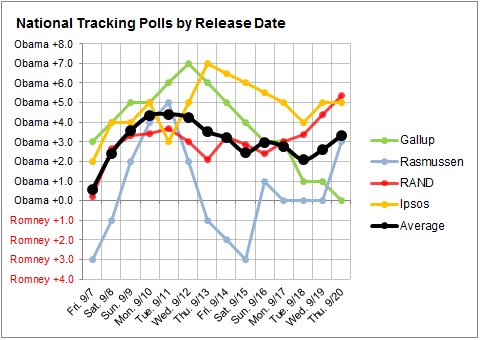 A simple average of the four tracking polls put Mr. Obama 3.4 percentage points ahead on Thursday. That is essentially no different than a week ago, when the same technique gave him a 3.5-point lead.

It’s at least possible that Mr. Obama’s bounce was fading — but that the attention to Mr. Romney’s ”47 percent” comments has since given Mr. Obama renewed momentum. It will take a few more days before we can come to any sort of conclusion about this, however, especially since some of the tracking polls use long field periods and have only conducted a fraction of their interviews since Mr. Romney’s remarks were uncovered.

It’s also possible that we’ve been jumping the gun. The four national tracking polls all shot up very quickly after the Democratic National Convention, to the point that it seemed possible that Mr. Obama might eventually (if temporarily) gain as much as a six- to eight-point advantage in the race.

But the Gallup tracking poll, which showed an especially sharp shift, could have been exaggerating it because of statistical variance — and now may be underselling it for the same reason.

Last week, Mr. Obama’s state polls seemed to be underwhelming relative to his national ones. This week, just the opposite has been true. That might lend credibility to the hypothesis that the some of the national trackers initially exaggerated the extent of Mr. Obama’s bounce — but also, that the Gallup poll now exaggerates his d
ecline.

Of course, if you’re a purist, then the Gallup survey is the only one of the four tracking polls that you’ll find acceptable, since it’s the only one to use a traditional methodology. But then you have to reconcile that with the fact that the polls using the strongest methodological standards at the state level are now giving Mr. Obama a six-point lead in the battleground states.

Mr. Romney would much prefer the robopolls, warts and all. And if his numbers don’t improve soon, he had better hope that they are right.