At about 1:30 on Wednesday afternoon, I tweeted in exasperation: “The. Polls. Have. Stopped. Making. Any. Sense.”

I’d just seen a Marquette University poll of Wisconsin, which put President Obama 14 points ahead of Mitt Romney there. This came after a Rasmussen Reports poll of New Hampshire, published earlier that day, which had given Mitt Romney a three-point lead in the Granite State.

There is no plausible universe in which Mr. Obama wins Wisconsin by 14 points but loses New Hampshire by three. It’s not even obvious which of the states is more favorable for him. Earlier this week, for instance, we’d seen a Wisconsin poll putting Mr. Obama up just one point there, while a different survey of New Hampshire gave him a five-point lead.

Following the polls on Wednesday reminded me of the aphorism: “If you don’t like the weather in Chicago, wait five minutes.” When there are twenty or more polls published in day, as there were on Wednesday, there are necessarily going to be some stronger or weaker ones for either candidate.

By the end of Wednesday, however, it was clear that the preponderance of the evidence favored Mr. Obama. He got strong polls in Ohio, Florida, Michigan, Wisconsin and Virginia, all from credible pollsters. Mr. Obama, who had been slipping in our forecast recently, rebounded to a 75.2 percent chance of winning the Electoral College, up from 72.9 percent on Tuesday.

The most unambiguously bearish sign for Mr. Romney are the poor polls he has been getting in swing states from pollsters that use a thorough methodology and include cellphones in their samples.

There have been 16 such polls published in the top 10 tipping point states since the Democratic convention ended, all conducted among likely voters. Mr. Obama has held the lead in all 16 of these polls. With the exception of two polls in Colorado — where Mr. Obama’s polling has been quite middling recently — all put him ahead by at least four points. On average, he led by 5.8 percentage points between these 16 surveys. 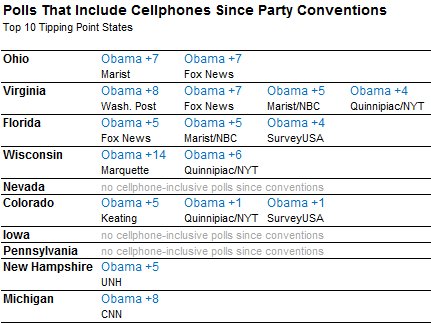 If this is what the post-convention landscape looks like, then Mr. Romney is in a great deal of trouble. Perhaps these polls imply that Mr. Obama’s lead is somewhere in the range of five percentage points in the popular vote — national polls suggest that it’s a bit less than that, but state polls provide useful information about the national landscape. Or perhaps they imply that Mr. Obama is overperforming slightly in the swing states.

Either way, that’s a pretty big deficit for Mr. Romney to overcome. What’s more, Mr. Obama was at 49.4 percent of the vote on average between these 16 surveys, meaning that he’d need to capture only a tiny sliver of the undecided vote to get to an outright majority. (If we’re being technical, 49.4 percent might be sufficient for him to win these states on its own, since perhaps 1 or 2 percent of the vote will go to third-party candidates.)

To be clear: I do not recommend that this is the only data you look at. The forecast model also evaluates polls that exclude cellphones, although it gives them slightly less weight. Those have not necessarily shown a great deal of strength for Mr. Obama.

And just as the model looks at state polls to infer the national trend, it also does the reverse, using the national polls (and essentially the assumption of ”uniform swing”) to infer where the states stand. The national polls show a spread right now from an effective tie to an eight-point lead for Mr. Obama. Taken as a whole, they seem to imply more like a three or four point lead for Mr. Obama rather than something in the range of five points. (These distinctions really do make a difference, especially with so few undecided voters left.)

The other questions, of course, are whether Mr. Obama’s bounce is fading, and if it might fade further. His FiveThirtyEight forecast remains off its high of about an 80 percent chance of victory, that he achieved late last week.

The most compelling case that Mr. Obama’s bounce is diminishing is from the Gallup and Rasmussen Reports tracking polls, both of which were unchanged on Wednesday, but which have reverted sharply from their post-convention peaks and are now at their preconvention levels instead.

These tracking polls have a fair amount of influence on the FiveThirtyEight forecast at potential turning points in the race, and they are certainly worth your trouble to look at — especially the Gallup poll, which has a large sample size and uses a thorough methodology.

But just as a thought experiment: if you exclude the Gallup and Rasmussen Reports tracking polls, it isn’t clear at all that Mr. Obama’s bounce is decaying. His bounce in the RAND Corporation’s online tracking poll has actually grown slightly, and his standing has roughly held steady (although with some fluctuations) in another online survey, from Ipsos.

The state polls allow for fewer direct comparisons, since most of them take the temperature of a state at most once every few weeks. But if anything, Mr. Obama’s state polls so far this week have been a bit stronger than last week, when they were a little underwhelming.

In the FiveThirtyEight “now-cast”, which does not adjust for the effects of the party conventions as our Nov. 6 forecast does, and which considers the possibility that a candidate would win a “snap” election held today, Mr. Obama’s chances rose to 94.4 percent on Wednesday, his highest position to date.

Our Nov. 6 forecast, however, continues to assume that Mr. Obama’s position may be slightly inflated by his convention. Between that possibility, Mr. Obama’s mediocre results in polls that do not call cellphone numbers, and the Gallup and Rasmussen trackers, the
totality of the evidence continues to require some equivocation.

It’s certainly possible that the story told by the high-quality swing state polls is right, but if so, we should see the consensus of the evidence (if not every last outlying or dubious poll) come into line with it soon enough. The FiveThirtyEight forecast, which makes Mr. Obama about a 3-to-1 favorite, is consistent with the odds offered at betting markets and by bookmakers. I wouldn’t feel as though there were much value in placing a bet on either side of that line.

But if Mr. Obama is having days like this in the polls a week from now, then Mr. Romney is either going to be banking on an exceptionally lopsided turnout, or some sort of October surprise. Either is a possibility, but not one you’d want to put a lot of money on.