Florida has a well-established reputation as a swing state. But as the election season has worn on, it has come to look even more important. Florida now ranks a clear second on our list of tipping point states, those most likely to provide the decisive votes in the Electoral College, behind only Ohio.

Florida is typically just slightly Republican-leaning, and the tipping point calculation is sensitive to even the smallest deviations from the national averages. As I’ve argued before, for instance, North Carolina isn’t that essential to the electoral math, even though the race there is quite close, because other states that would help get a candidate to 270 electoral votes precede it in the pecking order.

But as the election has evolved, Mr. Obama’s polling has held up fairly well in Florida, including another decent poll there on Tuesday, which put him four points ahead.

Just as important, Mr. Obama’s polling has been choppy lately in a several other states, particularly Virginia (where he got a very poor poll on Monday), Colorado and Iowa, which had initially appeared to be easier wins for him. It is more conceivable now that Mr. Obama could have an easier time winning Florida than those other states, increasing its importance.

Nonetheless, Florida is mostly a state where Mr. Obama is playing offense. If he wins it, it will solve almost all of his other problems.

If Mr. Obama wins Florida, he could lose each of Virginia, Colorado and Iowa, along with Ohio, Wisconsin, and North Carolina, and either New Hampshire or Nevada, and still win the Electoral College. 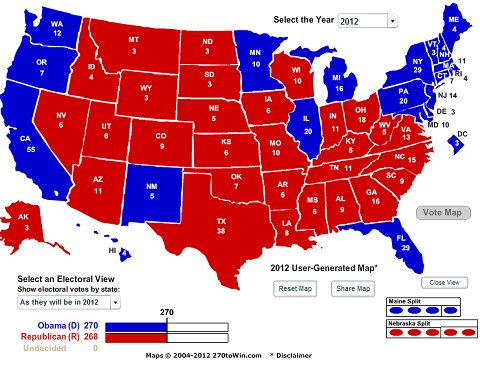 From Mr. Romney’s point of view, conversely, that might seem to make Florida a must-win state. In fact, it’s possible to put some numbers around this idea.

Defining a must-win state in a formal way is a bit tricky. For example, is Georgia a must-win for Mr. Romney? If he loses it, he would almost certainly lose the Electoral College. But that is because Georgia is much more Republican-leaning than the states that we would ordinarily classify as swing states. If things get bad enough for Mr. Romney to lose Georgia, his map will almost certainly be a disaster in a number of other ways.

So what we might really think of as must-win states are those that a candidate could not afford to lose even in a close election.

Imagine that the election is very close: the popular vote is within one percentage point either way. This condition occurred roughly 3,000 times out of the 25,000 simulations that I ran in the forecast model on Monday.

For each of the top 12 states on our tipping point list, I looked up the probability of Mr. Romney winning the election conditional upon losing the state in these 3,000 simulations. If Mr. Romney has great difficulty winning the Electoral College without the state in a close election, we can fairly describe it as a must-win.

These simulations estimate that Mr. Romney has only a 2 percent chance of winning the election if he loses Florida — even assuming that the election is very close over all. Losing its 29 electoral votes just presents too daunting a challenge for him, given his inability so far to penetrate into states like Pennsylvania that could plausibly substitute for it.

So, it isn’t a cliché to call Florida a must-win for Mr. Romney; he very badly needs it. 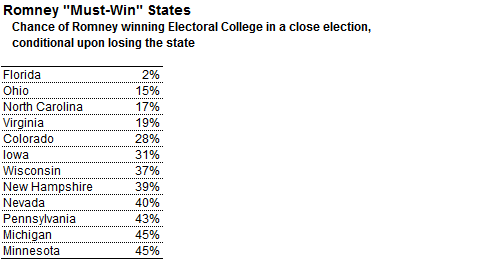 What does the same list look like for Mr. Obama? Pennsylvania is the closest analog to Florida for him; he has just a 10 percent chance of winning a close election if he loses the state.

However, Mr. Obama is highly likely to win Pennsylvania, according to our forecast, as he has led in every poll of the state since February and as Mr. Romney has not placed all that many resources into the state.

Otherwise, Mr. Obama’s electoral strategy is fairly robust. He has about a 28 percent chance of winning a close election if he loses Ohio, for instance, about twice Mr. Romney’s chance of doing the same. 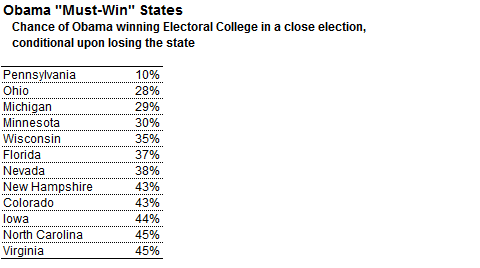 A Poor Poll for Obama in Virginia

As I mentioned earlier, Mr. Obama received a very unfavorable result in a Virginia survey on Monday. That survey, from Gravis Marketing, gave Mr. Romney roughly a five-point lead there.

Surveys from Gravis Marketing have been very strongly Republican-leaning this cycle — by about four percentage points relative to the consensus. The forecast model adjusts for this, and treats the poll as showing the equivalent of a one- or two-point lead for Mr. Romney instead.

Still, a survey showing Mr. Obama trailing by two points in Virginia would qualify as a poor result for him, especially in the midst of his convention bounce.

We’ve had a near-obsessive focus on the national tracking polls lately. They have their pluses and minuses and are generally not a huge focus of our analysis, but they are highly useful in cases where there has been a potential shift in the national environment and you’d like to have a baseline to measure it against.

On Monday, Mr. Obama’s performance in the national tracking polls was mixed. He added a point in the Gallup national tracker, building his lead to six points over all in that survey. But he lost ground in the tracking polls published by Rasmussen Reports and in an online survey by Ipsos.

It appears that Mr. Obama’s momentum from his convention is close to having peaked, or has already. Jim Geraghty, of National Review, caught an interesting detail from the ABC News/Washington Post survey that was rel
eased very early Monday morning.

The Washington Post reported that Mr. Obama had a clear lead over Mr. Romney in the polling it conducted on Friday, but that his advantage had dissipated in the polls it conducted last weekend.

I’m not sure I’d put a huge amount of stock in this; the daily breakouts in polls are subject to small sample sizes and therefore large margins of error. But it does seem that the most pertinent question has shifted from how much higher Mr. Obama’s polls will grow to how many of the gains he made after his convention will he keep.

What we could really use now is a higher volume of state polling. If the character of the race has changed, these will help us to know what the new landscape looks like.

And if it quickly reverts back to the preconvention mean instead — with Mr. Obama holding a lead of about two points nationally — it will be close enough that the Electoral College math will become more important.