We’ve been writing near-daily Senate updates, usually focusing on one or two states. But most races don’t see big shifts from week-to-week, let alone day-to-day. Overall, there’s been a modest deterioration in Republican chances to regain the Senate — 57 percent according to FiveThirtyEight’s latest Senate forecast — but the GOP remains slight favorites to win the six seats necessary to take a majority.

Yet, there remains a good deal of uncertainty. We’re still more than a month out from Election Day, and there are several races where a new poll could effect a big swing. Two characteristics make a race more sensitive to new data: competitiveness and a lack polling.

Usually there’s little overlap in these two categories; pollsters tend to survey competitive races. But polling has been spotty this year. So we put together a “Poll Impact Index” — dividing competitiveness (the percentage chance the non-leading candidate(s) has of winning) by the amount of polling we have (the cumulative weight of the polls our model is using). The amount the model weights each poll depends on the quality of the pollster, the sample size and how recently the survey was conducted. (An average 600-person poll gets a weight of about 1.0 when it is released, then that weight declines over time.)

It’s a rough calculation, but here are the races where a new survey could have the biggest impact: 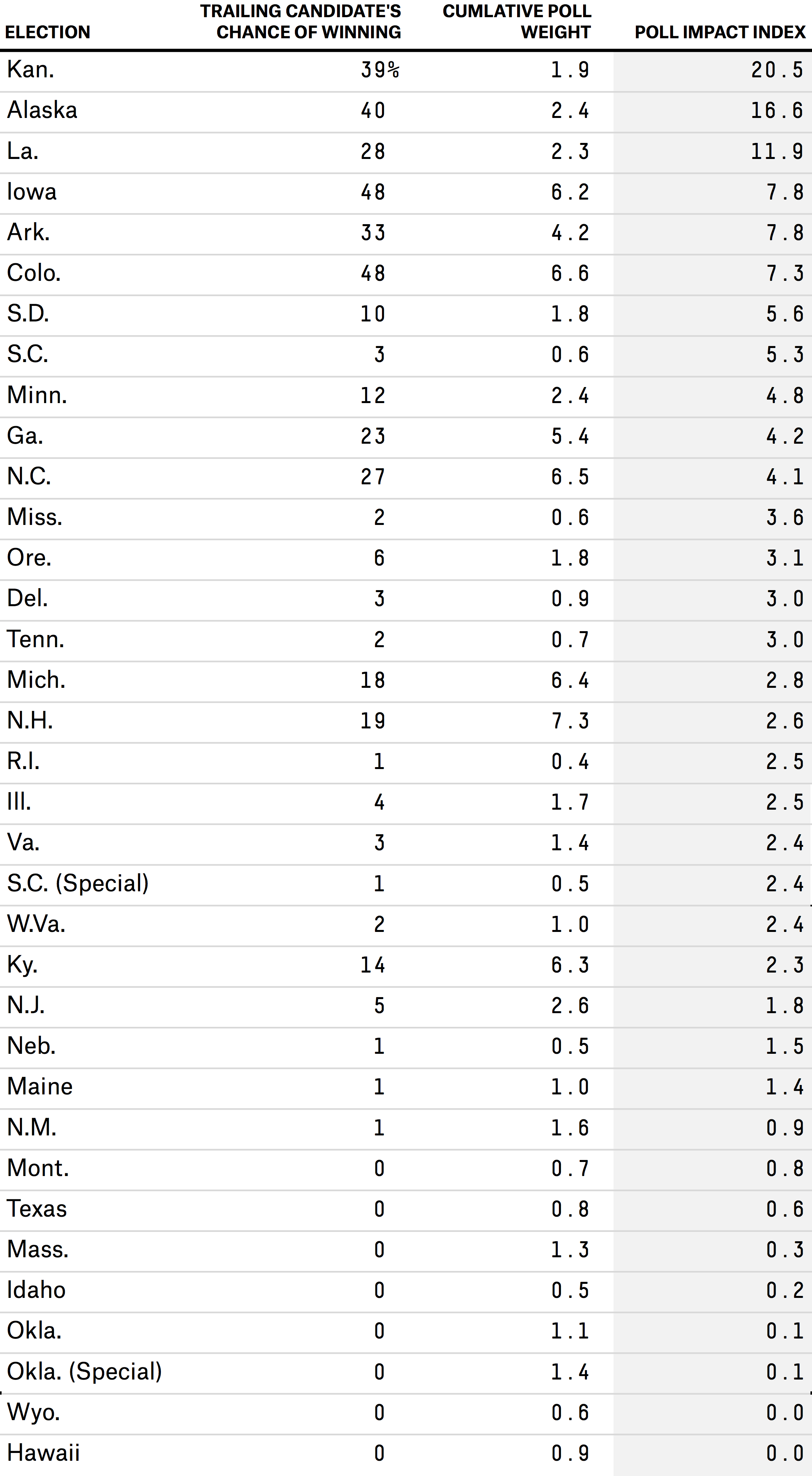 Not surprisingly, the state most sensitive to new polling is Kansas. Because of a Kansas Supreme Court ruling on Thursday that Democrat Chad Taylor does not need to appear on the ballot, the model now only counts polls that do not include Taylor. And most polls have included him. The matchup between Republican Pat Roberts and independent Greg Orman is also one of the closest in the country. A couple of new polls in Kansas could go a long way in changing the outlook.

The same is true for Alaska, where there hasn’t been a single non-partisan poll conducted by a live interviewer this entire campaign. Indeed, there have been only two non-partisan polls of any type conducted since last month’s primary.

Louisiana, like Alaska, has seen a lot of polls from groups aligned with the Democratic Party. Fox News has conducted the only live interview, non-partisan poll in Louisiana since July. Overall, our weighted number of polls there is just a little more than two. That’s not many surveys for a state where the trailing candidate, Democratic Sen. Mary Landrieu, still has a 28 percent chance of winning.

On the other hand, the contest in North Carolina is close, but has seen a lot of polls. Democratic Sen. Kay Hagan has led in every recent survey, and a new High Point University poll released on Monday showing her up 42 percent to 40 percent over Republican Thom Tillis didn’t change the forecast much. Hagan has a 73 percent chance of winning, down from 75 percent.

Michigan and New Hampshire are in the same boat. We give the Democrat in both states a greater than 80 percent chance of winning. A Public Policy Polling survey in New Hampshire finding Democratic Sen. Jeanne Shaheen up 50 percent to 44 percent doesn’t change that. Three new Michigan surveys all showing Democrat Gary Peters up from 3 to 7 percentage points barely changes the outlook there either.

You might also note that Republican Sen. Lindsey Graham’s reelection campaign in South Carolina has a relatively high score, even though the race isn’t thought to be competitive. The reason is fairly simple: Graham has led by low-double digits in the little polling there has been. Remember, Kansas wasn’t thought to be competitive until the first poll showed it to be. No one expects Graham to lose, but more polling would make us feel more confident. Ditto for Democratic Sen. Al Franken in Minnesota.

Finally, let’s cool it in Kentucky for a little. Republican Mitch McConnell has a consistent lead over Democrat Alison Lundergan Grimes, and a newly released Ipsos poll giving McConnell a 46 percent to 42 percent lead just confirms what we already knew.

FICTIONAL POLL OF THE DAY

Because I’m under the age of 60, I probably wasn’t going to and didn’t watch last night’s episode of “The Good Wife.” It appears, however, that a poll was taken to convince the character played by Julianna Margulies to run for “State’s Attorney.” While FiveThirtyEight applauds the use of polls on TV and in movies, I must complain about the sample size in this poll: 4,000.

The reason is rather simple: marginal return. Live interview polls, which most serious campaigns use, can cost well into five figures. Even a lower quality, automated phone poll costs thousands of dollars.

At the same time, the margin of error for a poll with 800 respondents is just 3.5 percentage points. The margin of error with 4,000 respondents? 1.6 percentage points. The small difference in error just isn’t worth the major difference in price. “The Good Wife” writers, I’m available as a “poll consultant.” Contact my agent. [Editor’s note: Harry doesn’t have an agent.]

Most news that happens during election season won’t make a dent in the race. That doesn’t mean it’s not juicy or interesting. These are the stories people are talking about.

The photo of the LSU keg stand with @SenLandrieu you've all been waiting for. #RollCallontheRoad #LASen pic.twitter.com/wk6M8Rx1Lq

Every election, one goal is to forecast the eventual winner of the race. But in contested races, there’s always at least one other person who has to lose. Sometimes doom is certain, other times less so. Here, we celebrate these individuals and point you to the best local journalism about them.

Libertarian candidate John Bujak is probably going to lose his bid to become the governor of Idaho, but he could also make the main dance between the top two contenders close enough to get interesting. Bujak has had an interesting career in politics; a former Canyon County prosecutor, he has represented himself in five criminal trials in the past three years and won each of them.

But I’m not doing this story justice. Just read this piece from the Spokesman-Review.

THE LEE ATWATER MEMORIAL ABSURD AD OF THE DAY

That concludes this segment of EYE ON 2016.