There is some further erosion in the Democrats’ standing in the 2010 Senate picture this afternoon, although several of the risks to them had already been accounted for by our model. Democrats now project to retain a total of 54.4 Senate seats in the 112th Congress that will convene next January, a loss of 4.6 from their current position. This is down from a forecast of 54.7 seats late last week.

This may somewhat understate the downside risk to the Democrats, however, as our model shows a somewhat asymmetric distribution in the potential number of Senate seats. Although the average number of Demcoratic seats is 54.4, the median and modal numbers are closer to 53. 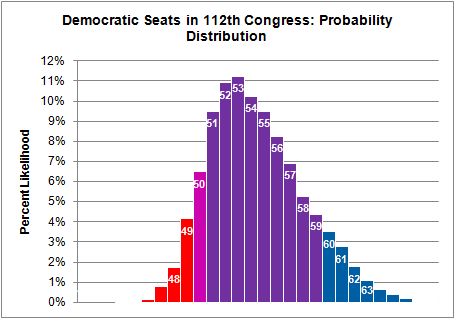 Let’s check in on some of the individual races whose status has been impacted by recent news.

Delaware. In Delaware, the Democrats’ preferred candidate, Delaware Attorney General Beau Biden, will not run for the Senate. Although this substantially reduces the Democrats’ chances of retaining the seat, which was formerly held by Vice President Joe Biden, we think it would be premature to classify the race as solid Republican. Although Mike Castle is fairly popular as an individual, he is also a part of the very unpopular institution known as the Republican Congress. In addition, an October poll found New Castle County Exeuctive Chris Coons, a potential candidate, running within 12 points of Castle, a not-insurmountable deficit for someone with less than 50 percent name recognition. Although I suspect this is slightly too generous to the Democrats, in the absence of further polling our model gives them a roughly 1 in 4 chance of holding the seat:

(Note: eagle-eyed readers will note that Coons’ chances had been 17 percent, not 27 percent, in last week’s update. The change does not reflect any new polling but rather the fact that we had erroneously characterized Coons as having no electoral experience when he is in fact the Executive of New Castle County, a non-trivial position considering that Delaware has just three counties.)

Indiana. In Indiana, a Rasmussen poll shows incumbent Evan Bayh leading declared GOP candidate John Hostettler by 3 points, and trailing potential candidate Mike Pence by the same margin. Although this is the first poll of the state, our regression model had already flagged Indiana as being competitive, and potentially highly so. Evan Bayh’s favorability rating in the poll is 58 percent, which is actually not bad, but down from previous polling which had frequently shown his approval and favorability numbers in the 60s and which may not provide enough cushion in a magenta state in a very tough cycle for the Democrats.

Overall, and despite the fact that Rasmussen polls have had a Republican-leaning house effect (which our model accounts for), we show the race as being a toss-up, regardless of the identity of the Republican candidate. Although an entry by Mike Pence would surely help Republicans, it is perhaps not as critical to their chances as is commonly believed as this is mostly about generic anti-incumbent and anti-Democratic sentiment.

Nevada. Lastly, in Nevada, a Research 2000 / Daily Kos poll shows Harry Reid trailing his most likely Republican opponents by 9 and 11 points, respectively. This is the first poll to show Reid losing by double-digits against any Republican and is especially bad news for him considering that Research 2000 polls have had a Democratic-leaning house effect thus far this cycle. We now show Reid with just a 14 percent chance to keep his seat against Sue Lowden, and just a 17 percent chance against Danny Tarkanian. An entry by Nevada Lieutentant Governor Brian Krolicki could make life even more difficult for him. Both the Research 2000 poll and our regression model, however, show other Democrats in a more competitive race against the Republicans.