Since we last ranked the Senate races, there have been two trends that have been operating somewhat in contrast to one another. On the one hand, Democrats have continued to have major problems with candidate selection — as evidenced by Evan Bayh’s retirement in Indiana, Beau Biden’s failure to run in Delaware, and John Boozman’s running on the GOP ticket in Arkansas. On the other hand, the polling itself has somewhat stabilized for Democrats and perhaps even slightly improved. Recent polls indicate improving situations for Democratic candidates in Pennsylvania, New York and Illinois, for instance. Nor have any of the Republicans’ remaining “big three” recruits — George Pataki in New York, Tommy Thompson in Wisconsin, and Dino Rossi in Washington — yet signed up for a piece of the action.

Overall, we have Democrats projected to lose an additional 4.1 seats in November, which would take their number down to 54.9. This is essentially unchanged from January’s forecast, when we had the Democrats retaining 54.7 seats. Republicans’ chances of picking up the 10 seats they’d need to control an outright majority of the Senate remain somewhat remote for the time being, on the order of 5-10 percent according to our model. They will almost certainly need one more recruiting coup — Wisconsin may be the most likely — and then will have to run the table everywhere else, including some states like Missouri and Ohio where they’re defending seats themselves. 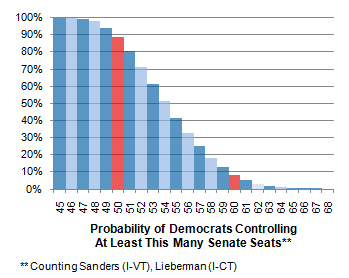 Detail on each of the remaining 36 Senate races follows, but a few notes before we begin.

— House effects have continued to be very large this cycle. In particular, Rasmussen Reports has had something like a 5-point house effect in favor of Republican candidates, which has a fairly tangible impact on the overall characterization of the Senate picture because of how frequently they poll. Although Rasmussen may well prove to be correct about this cycle — note that they use a likely voter model when few other pollsters do — the idea is not to let them flood the zone simply by being more prolific than other pollsters; our model is designed to correct for these effects. Note that some other pollsters, such as Research 2000, have had strong Democratic-leaning house effects; our model adjusts for this as well.

— We have Tommy Thompson and George Pataki at about even-money if they decide to enter their respective races, with Dino Rossi probably being a slight underdog in Washington State. Although some pollsters have shown leads for these candidates, they tend to be pollsters with Republican-leaning house effects.

— In many states, there’s still quite a lot of guesswork to do about the identity of the respective candidates. The Republicans, in general, would benefit from picking candidates backed by their establishment. For Democrats, on the other hand, there is generally little difference between the numbers of the establishment candidate and the challengers.

— The Democrats should really be thought of as starting out from a baseline of 58 seats, since the Republicans’ chances of taking over North Dakota are virtually 100 percent. Democrats have a small but tangible chance of making a race of it in Delaware, on the other hand.

— I personally think the notion that Democrats are 2:1 favorites in Illinois is a bit too optimistic, but we’re going on the basis of the objective evidence to date rather than trying to anticipate the ultimate impact of issues like Alexi Giannoulias’ banking problems.

A complete statistical rundown follows in a format that should hopefully be fairly transparent to everyone. Note that the numbers attached to each race are projections of the November outcome and not simply polling averages. For additional detail on methodology, please see January’s article. Races are ranked in order of their likelihood of changing parties.