Our projection models are designed to be fairly dynamic — but you don’t usually have the circumstance wherein a sitting senator gets convicted on seven felony counts (appeal pending!) eight days before an election. So, a little bit of creativity is going to be required.

Once we have post-conviction polls in Alaska — Markos Moulitsas has already commissioned a Research 2000 poll in the state, and I’m sure that Ivan Moore and Rasmussen are also eager to get out into the field — we will use those and simply drop any pre-conviction numbers. But none of those polls are back from the field yet. So we need some sort of band-aid in the meantime.

The closest recent parallel I can find to the Ted Stevens situation is that of former Ohio governor Bob Taft, who in August, 2005 was convicted on misdemeanor charges of failing to disclose gifts and golf trips paid for by lobbyists. Taft plead no contest and remained in office, but this didn’t have a favorable effect on his approval ratings. He went from a 34-55 (-21) in a University of Cincinnati poll taken in April 2005 to a 26-65 (-39) in the same poll in August 2006, a net decline of 18 points.

Let’s assume that Stevens will also suffer a decline in his net approval score of 18 points. Since he’s at roughly 50/50 now, that would put him in the range of 40 percent approve, 60 percent disapprove. Our regression model uses approval ratings for incumbent senators as one of its inputs, and thinks a decline of this magnitude would cost a senator about 6 points in the polls … actually, 5.8 points. So what we’re going to do is apply a 5.8 point penalty to Stevens’ numbers in Alaska. Since the race was a toss-up before, this puts him about 6 points behind overall, making Mark Begich an 87 percent favorite to take his seat. That seems conservative to me, frankly, given that even the guys at RedState are abandoning Stevens, but it’s what we’ll run with until there’s some polling out.

Assuming that Stevens loses his race, how much does this help the Democrats’ chances of picking up a 60-seat caucus? Well, it certianly helps some. But this is a race that the Democrats were probably going to win if they had a reasonably good night overall. There aren’t tipping point senate races in the quite the same way there are tipping point states in the race for the White House; senate races move a bit more independently from one another. (Though not completely so; there have been plenty of years like 1980 and 2006 when a party overperformed its polls in essentially every high-profile congressional race). Nevertheless, it is Georgia, Mississippi and Kentucky — not Alaska — that represent the key races if Democrats want to hit 60 seats and 60 specifically. 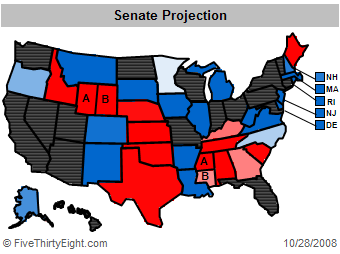 …and in those races, the Democratic challengers remain within striking distance, but none have yet broken through. In fact, there’s a good poll out for Mississippi incumbent Roger Wicker, who leads by 12 according to the Mobile Press Register. This was a weird little survey — there were tons of undecideds, especially among black voters — but nevertheless, we are about getting to the point where we’d want to see a nominal lead for Ronnie Musgrove in at least one public poll. Likewise for Bruce Lunsford in Kentucky and Jim Martin in Georgia (though close may count in Martin’s case, who can earn a December run-off by holding Saxby Chambliss under 50 percent of the vote).

The Democrats, however, are making significant progress toward locking in a number in the 57-59 seat range. In Colorado, Mark Udall now rates as a 97 percent favorite thanks largely to a Rocky Mountain News poll that has him ahead by 13. That sounds like an aggressive forecast, until you remember that the Republicans have essentially pulled out of the race. John Sununu, meanwhile, is running out of time to catch up to Jeanne Shaheen in New Hampshire.

This means that there are five Democratic pickups — Colorado, New Hampshire, Alaska, Virginia, and New Mexico — that are now looking quite safe. Oregon may soon be joining them, as new polls by SurveyUSA and the Portland Tribune put Jeff Merkley ahead by 7 and 5 points, respectively. Since Oregon votes entirely by mail, this is not a good place to be trying to make up a late deficit, even if it’s a relatively small one.

Kay Hagan, meanwhile, appears as though she may have plateaued in North Carolina. Unfortunaetly for Elizabeth Dole, Hagan has plateaued with a small lead still in hand. This has become an exceptionally expensive race — Dole just lent her campaign an additional $3 million — and as funds get re-directed from places like Alaska and Colorado, it may get even more so.

Minnesota remains too close to call, if tilting very slightly to Al Franken. The key factor here is the support for independent Dean Barkley, who is still polling at about 18 percent, but much of that support is likely to collapse by election day. From parsing the SurveyUSA cross-tabs, it appears that about 29 percent of Barkley’s vote comes from Democrats, 20 percent from Republicans, and 51 percent from true independents. Also, roughly two-thirds of Barkley’s voters are pro-choice. This means that the race is probably Franken’s to lose, but with so much advertising on both sides, it can be hard to drive a message.