Today’s senate polling update shows sharp movement in several races over the course of the past week, generally favoring the Democrats, but also pushing a number of contests closer to toss-up status. 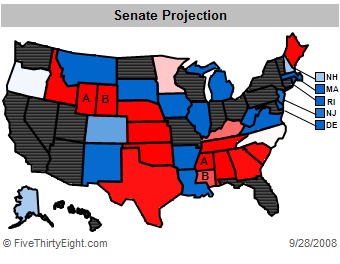 The most dramatic development is in Kentucky, a race that had previously been left for dead, where new polls from Mason-Dixon and SurveyUSA show Mitch McConnell with leads of just 1 and 3 points, respectively. Kentucky, while socially conservative, tends to vote Democratic on pocketbook issues and with the bailout and Wall Street crisis on the forefront of everyone’s mind, that is probably responsible for the movement. Mitch McConnell, because of his leadership position in the Senate, will have little choice but to support the bailout package. Meanwhile, since Barack Obama is not competing in Kentucky, Lunsford will be free to oppose the bailout without undercutting him, and that’s what we should probably expect him to do. This is a very intriguing race, and it may also be something of a canary in the coal mine for incumbent Republicans; it will also be interesting to see new polling in states like Georgia and Mississippi.

The Republicans, however, get good news in New Hampshire, where John Sununu has significantly tightened his race with Jeanne Shaheen, and in fact overtaken her in one poll (Rasmussen). From what I can tell, Sununu’s tepid approval ratings haven’t improved any; instead, he’s invested a lot of money in attempting to get Shaheen’s favorability scores down, and it appears to be working. New Hampshire is also a state that hasn’t shown much of a post-Lehman bounce for Barack Obama. We still have this race as leaning Democrat, but it will be a fight to the finish.

Back to the Democratic side of the ledger, we also have them improving their position in North Carolina, where Elizabeth Dole’s approval ratings have tanked, and in Oregon, where Jeff Merkley’s name recognition has improved. Both contests now rate as true toss-ups.

There are also a couple of polls out showing a surprisingly close race in South Carolina, where Lindsay Graham’s opponent, Bob Conley, is a cross between Ron Paul and Ross Perot running in Democratic clothing. Conley has been campaigning against the Democratic party establishment nearly as much as Graham himself, which makes for some very strange dynamics — including a prominent conservative publication asserting that he is more conservative than Graham. Still, he’d likely side with the Democrats on issues like foreign policy, free trade, and Constitutional protections. This race remains an extreme long-shot, but might be viable if GOP morale is low.

Overall, we now attribute the Democrats with a 16 percent chance of grabbing a 60-seat working majority in the Senate (counting Joe Lieberman and Bernie Sanders), the highest that this figure has been all year. And if they can win both Mississippi and Kentucky, the toughest of the competitive races, they have an outside chance of winning 60 seats without Lieberman.