Democrats appear to be on the verge of wrapping up several more pickups of Republican-held seats — but their odds of finishing with 60 or more seats are becoming longer. 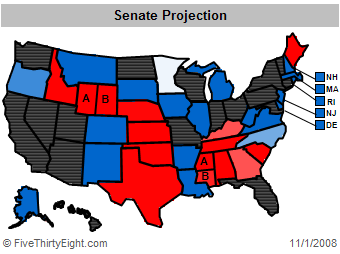 The good news for Democrats comes in several races that already leaned Democratic, and now appear to be more solidly so. Further polling in Oregon confirms that Jeff Merkley has established a lead there. Frankly, since much of the vote has come in from Oregon and Republican turnout is depressed there, I think it’s more likely that Merkley will win by double-digits than Gordon Smith will hold on to his seat. In North Carolina, we have added polls from Research 2000, Elon, and CNN, all of which give Kay Hagan leads ranging from 5 to 9 points; the race remains competitive, but sits on the brink of “lean” and “likely” Democrat. There is abundant polling of New Hampshire, and John Sununu does not appear poised to make any kind of late surge.

Meanwhile, in Alaska, Research 2000 has become the second firm to poll the race since Ted Stevens’ guilty verdict, and gives Democrat Mark Begich a 22-point lead. That, plus the 8-point lead that Begich had in an earlier Rasmussen poll, lead the model to conclude that the race is essentially unwinnable for Stevens. Notwithstanding the weird things that can happen to turnout in a state like Alaska should the presidential race get called early, it too looks like a safe Democratic seat.

Those races, along with Colorado, New Mexico, and Virginia, which we had already “called” for the Democrat, constitute what look to be 7 fairly certain pickups (although partisans on either side of the Dole-Hagan race should still be making all the phone calls they can muster); this would give the Democrats a 58-seat caucus counting independents Bernie Sanders and Joe Lieberman. The 59th and 60th seats, however, may be tougher. Minnesota remains about as much of a toss-up as any race can get; the only poll added since our last update, from Research 2000, gives Norm Coleman a 3-point lead. My sense is also that Minnseota may behave fairly independently from the trend nationwide; that is, I could see Coleman holding onto his seat even given a fairly bad night for the Republicans overall, and to a lesser extent the reverse holding true for Franken. (The contrast might be something like North Carolina, which feels like more of a ‘surge’/wave election).

Meanwhile, the three Southern seats in Georgia, Kentucky and particularly Mississippi are increasingly looking close-but-not-quite for the Democrats. The surges of Jim Martin and Bruce Lunsford in the first two races appeared to be dictated principally by the financial crisis and the attendant bailout, as the Republican incumbents in both races voted for the bailout bill. However, given the relative lack of bad financial news over the past couple of weeks, it is not surprising that they have stalled out some. Martin, though, probably remains in a stronger position than our numbers indicate, as I think some of these turnout models are conservative in Georgia given what has transpired in the early voting; at the very least, he has a good chance of salvaging a run-off.

In Mississippi, Roger Wicker is neither a particularly unpopular incumbent (he was wise enough to vote against the bailout) nor has Ronnie Musgrove been a particularly compelling opponent. Although Musgrove might theoretically benefit from a black turnout surge, Wicker is now winning a comparable percentage of the white vote to John McCain.

We’ll have at least one more of these updates before Tuesday, and possibly two as polls and events dictate.