Democrats continue to make gains in senate races around the country, and now rate as having roughly a 1-in-4 chance of emerging with a 60-seat working majority. 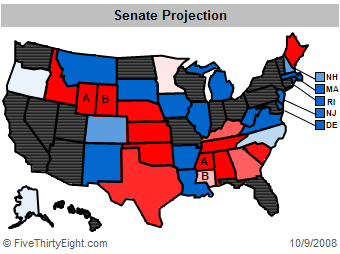 The most substantial movement this week is in Georgia, where several polls now show a tight race between Saxby Chambliss and Jim Martin. Martin remains relatively underfunded, but his economic populist message is a good fit for his state, his advertising has been sharp, and Chambliss did not do himself any favors by voting for the bailout. Still, Chambliss remains narrowly ahead.

Kay Hagan, meanwhile, has continued to improve her position in North Carolina, which we now rate as Lean Democrat. About the only good news for the Republicans in Alaska, where Rasmussen now shows Ted Stevens with a 1-point lead, though Ted Stevens’ imminent trial could change all of that.

I have also made a couple of changes to the regression model. Firstly, we are replacing the partisan ID variable with a variable indicating Obama’s current standing in our presidential projections. Evidently, there are some coattails/synergies with Obama’s ground game in states like North Carolina. And secondly, I have introduced a variable for the number of Southern Baptists — our “scientific” way to demarcate the South — as the economy seems to be playing differently there than in other regions of the country. Both variables are highly statistically significant.