We are beginning to get a much clearer idea of where the action is going to be on Election Day. Although the Democrats are on the verge of wrapping up several pickups, their chances of earning a 60th seat have somewhat declined. 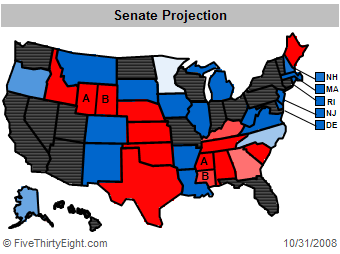 Democrats were always going to pick up seats in Virginia and New Mexico, and remain in position to do so. You can add Colorado to that list. Mark Udall now has double-digit leads in essentially all polling, and perhaps as much as two-thirds of the state has already voted; he will become the next senator from the Rocky Mountain State.

Our model also classifies New Hampshire as “safe”, meaning that it attributes Jeanne Shaheen with at least a 95 percent chance of picking up John Sununu’s seat. But I wouldn’t completely turn out the lights on this race. While Shaheen remains comfortably ahead in most polling, there has emerged a pretty significant gap between her support and Barack Obama’s, meaning that there are fair numbers of Obama-Sununu voters. That isn’t so out of character for New Hampshire, which contains as many independent voters as anywhere in the country, but if for some reason the polls are overestimating Obama’s performance, perhaps Sununu could make a race of it. Still, Sununu has been behind all year, he remains that way, and his time has basically run out.

Oregon is breaking Jeff Merkley’s way, as a hot-off-the-presses poll from PPP gives him an 8 point lead, his largest on the year to date. This follows polling earlier in the week by SurveyUSA and the Portland Tribune which had shown him ahead by 7 and 5 points, respectively. Gordon Smith has been left to fend for himself in Oregon, where John McCain never developed any momentum, and there is evidence that turnout is down in areas where his base might be located. With many of Oregon’s ballots already having been turned in, Smith’s chances of pulling this race out may be less than the 16 percent that the model assigns to him.

In Alaska, we have a post-conviction poll from Rasmussen, and have wiped out all pre-conviction data. That poll shows Mark Begich ahead by 8 points. The regression model is still a bit confused by this race and thinks it could be closer than expected, but I’m not really buying that. If the Research 2000 poll comes back this weekend with strong numbers for Begich, it will move toward the Safe Democratic category.

You can draw a line right about here … those are the six Democratic pickups that I’d describe as relatively safe (partly in the belief that the model is conservative on both Merkley and Begich for the reasons articulated above). We then get into what will be the three most closely-watched races on Election Night:

The first of these is in North Carolina, which continues to lean toward Demcoratic challenger Kay Hagan, but where we are waiting to gauge the reaction to Elizabeth Dole’s controversial new ad which implies that Hagan, an elder at the First Presbyterian Church, is an athiest. The ad has drawn a harsh reaction from the local media and a Rasmussen poll conducted on Wednesday night, just as the controversy was starting to brew, had Hagan moving into a 6-point lead. But, the Carolinas have a long tradition of last-minute attack advertising, and the only reason it has that tradition is because sometimes such things work. Dole’s ad is callous enough that it seems likely to be one of the exceptions, but this remains a race to watch.

In Minnesota, polling from PPP and the Humphrey Institute is showing movement toward Al Franken, but polling from Rasmussen and Mason-Dixon showing just the opposite and breaking in Norm Coleman’s direction. Such highly volatile polling is sometimes characteristic of races involving third party candidates, and Dean Barkley continues to hold onto about 15 percent of the vote in this race. As I suggested on Tuesday, it is likely that some of that Barkley vote will collapse, and there are some hints that is more likely to break toward Franken, but characterizing this race as anything other than a toss-up would be generous.

The other contest that will be watched very closely is in Georgia, where Jim Martin remains stuck about 2-3 points behind Saxby Chambliss in most polling, but where both early voting patterns and the nature of the undecided vote suggest that the race may in fact be closer to a toss-up. My guess is that there’s at least a 40-50 percent chance that the race is headed for a runoff, which is what would happen should neither candidate receive an outright majority of the vote.

The last group of races to watch are two contests breaking away somewhat from the Democrats, constraining their opportunity to pick up a 60th seat. The first of these races is in Kentucky, where Bruce Lunsford has stalled out at about 44 percent of the vote; he will need the undecideds to break to him in a big way if he’s going to win. The other is in Mississippi, where Rasmussen has become the second consecutive poll to give Roger Wicker a double-digit advantage. Our regression model seems to think that Obama may have more coattails in Mississippi than the polls are letting on. But Ronnie Musgrove has gotten somewhat boxed in, being portrayed as a liberal in attack ads by Wicker, but seen as too conservative by many progressive Democrats to warrant their money and attention, which has instead gone to candidates like Lunsford and Martin. The DSCC may need to look at its internal polling and figure out whether it wants to try and preserve an opportunity for Musgrove, or perhaps go all-in instead on a race like Kentucky.

There is no longer really any sort of fourth tier of races, though Nebraska hasn’t been polled in a long time. The two Democratic-held seats that the Republicans had hoped to put into play, in Louisiana and New Jersey, continue to look completely safe for the incumbents.