Something of the calm before the storm here, as there has been plenty of polling out since our previous update four days ago, but not in any one particular direction. 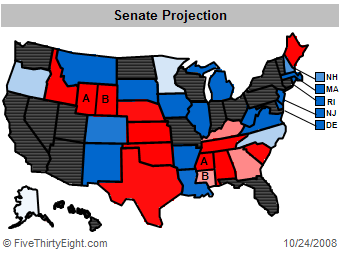 As before, the three critical races for any scenario in which the Democrats earn a 60-seat majority are the three vulnerable Republican incumbents in the South. These are Mitch McConnell in Kentucky, Saxby Chambliss in Georgia, and Roger Wicker in Mississippi. All three races lean Republican to the tune of about 2 points.

We could debate all day about which of these races in fact presents the best opportunity for the Dems. Mississippi would seem to be the toughest defense on paper, since Roger Wicker is an appointee rather than a true incumbent, and lacks some of the financial advantages trappings thereof. Mitch McConnell’s approval ratings continue to worsen, and Bruce Lunsford has drawn into a tie in at least one poll (SurveyUSA) of Kentucky, but Barack Obama would seem to have fewer coattails there than in the other two states.

In Georgia, conversely, the early voting numbers have been favorable to Democrats, and the state in fact remains winnable for Barack Obama. But we have yet to see a poll putting Jim Martin ahead by any margin, and the race is complicated by the fact that a run-off will occur in December if neither candidate achieves a 50 percent majority (a distinct possibility as Libertarian Allan Buckley is likely to draw somewhere between 1 and 4 percent of the vote). It is hard to say which candidate would benefit from a run-off, but the default assumption is probably Saxby Chambliss, who wouldn’t have to contend with an Obama turnout surge then, and who might benefit from an appeal to divided government (assuming that Obama wins the Presidency). Then again, in a world where Obama has prevailed, Democratic morale is likely to be much, much higher than Republican morale, and Democratic wallets are likely to be a bit more open; we could easily see eight figures pumped into a run-off election from each side.

The Democrats, meanwhile, remain the favorite in eight seats that are currently held by Republicans, although they are hardly out of the woods in several of them. Ted Stevens’ approval scores have improved incrementally in Alaska, but his fate may be determined by 12 jurors in Washington as much as a couple hundred thousand voters up there. Al Franken’s position has improved slightly in Minnesota to the extent where he’s ahead in 4 out of the 5 most recent polls. But those polls are also showing a fairly large third-party vote that is unlikely to materialize in its entirety on Election Day, meaning that there are an unusually high number of persuadable voters.

Texas, where Rasmussen shows a double-digit lead for John Cornyn, has probably come off the board for the Democrats; it is no more likely to be a pickup than something like Nebraska, where the Scott Kleeb campaign is very excited about the Democrats’ voter registration figures.

On the Republican side of things, Rasmussen shows Mary Landrieu’s race in Louisiana tightening a bit, although the GOP nominated a fairly weak candidate in that race and any closure in likely to amount to too little, too late.