Our Senate projections are little changed from our last update six days ago. We currently project the composition of the new Senate to be 56.7 Democrats, 41.3 Republicans, and 2.0 independents; this is not significantly changed from 56.6-41.4-2.0 last week. We furthermore show the Democrats as having a 32 percent chance to control a 60-seat caucus (counting independents Joe Lieberman and Bernie Sanders), up incrementally from 30 percent last week. 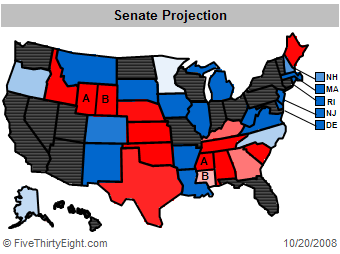 Although there has been a lot of polling within the past several days, much of it from Research 2000, for the most part it has been in line with expectations.

As before, the Democrats have a fairly clear path to 59 seats, which would involve their picking up Virginia, New Mexico, Colorado, New Hampshire, Oregon, North Carolina, Alaska and Minnesota, all of which they are presently favored in (although in several cases only barely so). They could then pick up a 60th seat between Mississippi, Georgia or Kentucky, or — less likely — Texas. While several of these races are quite competitive, none of them have quite broken through to toss-up or lean Democrat. The interesting thing for the Democrats, however, is that most of these races are in the South, where Barack Obama overperformed his polls during the primaries. If the same thing happens during the general election — because the pollsters have underestimated African-American turnout and so forth — then pickups in Mississippi and Georgia would seem as likely as not. Kentucky, where Obama has fewer coattails, where the Democratic nominee is perhaps slightly more liberal than optimal, and where the Republicans will pull out all the stops to save Mitch McConnell, may be a tougher proposition.