The Democrats appear to have nearly as much momentum in the race for Capitol Hill as they do for the White House, and now have approximately a 3 in 10 chance of winding up with a 60-seat working majority in the Senate. 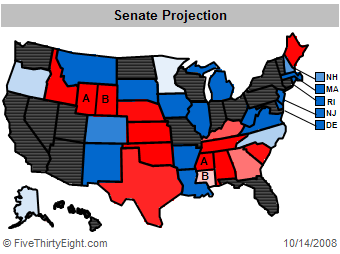 Noteworthy movement since our previous update includes Minnesota, which our model is finally giving to Al Franken after Rasmussen and Quinnipiac polls put him slightly ahead; North Carolina, where Kay Hagan is hardly out of the woods but now clearly appears to be favored, and Georgia, where one poll now shows a literal tie between Jim Martin and incumbent Saxby Chambliss, and several others have the race within the margin of error. Jeanne Shaheen and Mark Udall also appear to be solidifying their positions in New Hampshire and Colorado, respectively.

Indeed, it is difficult to identify any race in which the Republican candidate currently has the momentum. Alaska is perhaps the only state where the Presidential coattails clearly are liable to help them, but with a verdict still forthcoming in Ted Stevens’ corruption trial, they have to dodge a bullet that has the potential to ruin their chances of retaining the seat. Meanwhile, the Republicans are being out-campaigned in North Carolina, suffering under the weight of the economy in states like Georgia and Kentucky, and are having difficulty mounting any offense in states like New Mexico where Barack Obama is strong. Even in Minnesota, where Al Franken’s campaign has had many false starts, it’s now Norm Coleman who is on the defensive.

The Democrats are now favored to take over eight seats from the Republicans: Virginia, New Mexico, New Hampshire, Colorado, Alaska, North Carolina, Oregon, and Minnesota. If the Democrats win all eight of those races, they will only need one more to achieve 60 seats, and they have good opportunities in Georgia, Mississippi and Kentucky.

The good news for the Republicans is that they have the financial advantage in most of these races, as the Democratic rank-and-file scrambles to put together a budget for candidates like Jim Martin in Georgia. But, all the money in the world won’t help you if you don’t have an attractive message to sell, and right now the Republicans’ pleas for mercy are falling on deaf ears.