When the statewide presidential polls go into hibernation, so do polls for senate races, and so we do not have a whole lot of new data to look at. But what data we do have is reasonably friendly for the Democrats, pushing our forecast up from a net gain of 6.4 seats to a net gain of 6.6. 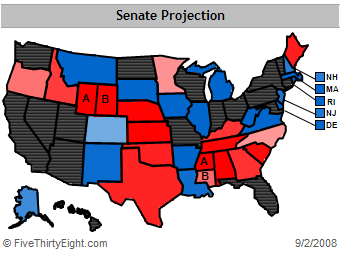 Three races have moved materially this week. North Carolina, where a Public Policy Polling has Democratic challenger Kay Hagan moving into a 3-point lead, pulling the race closer toward toss-up status. Minnesota, likewise, moves closer toward the toss-up category, with a Minnesota Public Radio poll putting Al Franken one point ahead. On the other side of the coin, Rasmussen again polled the Mississippi special election, and again showed Roger Wicker with a fairly comfortable (9-point) lead. That race looks to be moving away from the Democrats, although we could use another pollster in the field to take that race’s temperature.

Could Sarah Palin’s selection have a favorable effect for the Republicans on some of these red-state Senate races? I think that’s possible; in North Carolina, for instance, it’s a nice boon to Republicans to motivate conservative women to turn out. But, if the general effect of the Palin selection is to tend to polarize the electorate, the reverse could be true in a blue state like Minnesota.