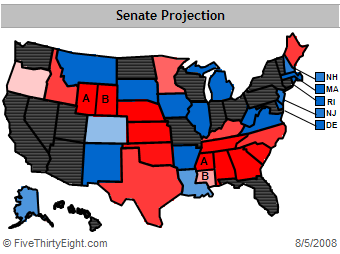 For the third consecutive week, our overall Senate forecast remains the same. We project the Democrats to control 55.3 seats, the Republicans 42.7, and independents two seats in the 111th Congress. However, there is movement in some individual races.

The most notable case in Alaska, where two polls taken after Ted Stevens’ indictment have Democratic candidate Mark Begich ahead by 13 and 21 points, respectively. Although there is a chance that Stevens could be primaried out, none of the other Republican opponents were doing any better against Begich. We now classify Alaska as a likely Democratic pickup.

The Mississippi-B seat has moved from Toss-Up to Lean GOP as a result of new Rasmussen polling that shows Roger Wicker 9 points ahead of Democratic challenger Ronnie Musgrove. In general, the Democrats seem to be losing a little ground in traditionally red states against GOP incumbents. This could perhaps be because of a slight improvement in perceptions of the Republican brand, as a result of issues like offshore drilling and the improved conditions in Iraq. More generally, although Senate races frequently break late, there are a number of cases such as in North Carolina and Kentucky in which Democrats are losing time off their clocks while failing to close the polling gap, which costs them incrementally each week.

One race to keep an eye on, however, might be in Idaho. A Research 2000 poll — the first independent poll out of Idaho in months — shows Republican Jim Risch with a 10-point lead over Larry LaRocco. However, there remain a lot of votes up for grabs in this race, as 24 percent of the electorate is either uncommitted or say they’ll vote for a third party.