While we have been devoting most of our attention to the Presidential race, the Democrats may now have their clearest path yet to a chance of controlling 60 seats in the Senate. 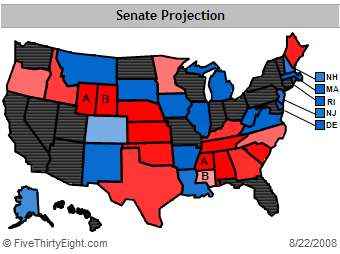 A victory for Mark Warner in Virginia appears all but certain, barring a last-minute effort to draft him as Barack Obama’s running mate. Although a recent Rasmussen poll in New Mexico shows substantial tightening in that race, the state can still be considered Safe Democrat. Jeanne Shaheen continues to hold onto a safe-looking lead in New Hampshire. While we’re not yet ready to call it a lock, a victory for Mark Begich over indicted incumbent Ted Stevens is highly probable in Alaska. And Colorado, after having tightened some in the last update, has moved slightly back to Mark Udall in this week’s edition, perhaps in response his flip-flop on offshore drilling.

That’s five seats. The other four are tougher, but the Democrats now have a better idea of which are the best targets. Three of the four have always been on the short list: those are Mississippi, which needs to be polled more but still appears to be their best chance, Minnesota, where the polling has been difficult to interpret but still indicates a competitive race for Al Franken, and Oregon, which has moved slightly toward Gordon Smith in recent weeks but where Jeff Merkley remains within striking distance. The new addition to the list is North Carolina, where three fresh polls from Civitas, SurveyUSA and InsiderAdvantage all show Liddy Dole’s lead dwindling to between 0 and 5 points, perhaps in response to the surprisingly strong campaign run by Libertarian Chris Cole.

Other conceivable pickup opportunities have moved away from the Democrats. Tom Allen has yet to provide a rationale to convince Maine voters to dump Susan Collins, and there are arguments for abandoning the race. Texas and Kentucky remain marginally viable, but only if forbidding demographic obstacles can be overcome. Less conventional, but perhaps more intriguing opportunities exist in Idaho, a non-incumbent race, and Georgia, where Jim Martin has received a bounce following his primary victory. Partisan polling in Oklahoma also indicates a tightening race, but we have yet to see independent polls to confirm it.

The GOP, meanwhile, is having little luck in trying to make Democratic-held seats competitive. Louisiana, which had looked like their best opportunity, has moved to a 17-point lead for Mary Landrieu in a new Rasmussen poll. Our model is now characterizing Louisiana as “safe” Democrat, which is probably aggressive, but John N. Kennedy is a poorly-organized opponent.