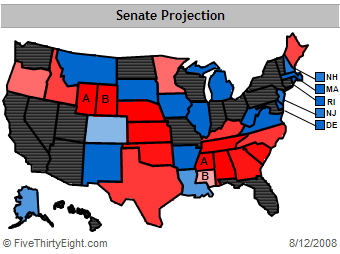 This is going to be a brief update; there were few dramatics in the Senate numbers this week. But there is one exception, and it is good news for the Republicans. In Oregon, Gordon Smith has opened up a lead over Jeff Merkley; a new Rasmussen poll shows Smith ahead by 6 points, and SurveyUSA , which is polling this race for the first time, has him up by 12. There is, at this point, a fairly clear dividing line between the five GOP-held seats that the Democrats appear likely (Colorado, Alaska) or nearly certain (Virginia, New Mexico, New Hampshire) to pick up, and everything else.

It may be out of the Democrats’ power to gain a 60-seat majority by means of a piecemeal approach. Instead, they will need something that shifts the national numbers in several races at once. For the time being, their numbers are moving in the wrong direction, as Republicans have ticked up slightly in generic ballot tests.

Also, the Democratic challenger has been determined in two races. In Georgia, Jim Martin will challenge Saxby Chambliss. Martin has a better chance at making a race of it than his opponent in the primary run-off, Vernon Jones, but remains about a 20:1 underdog according to our metrics. And in Tennessee, Bob Tuke is the choice; he’s about a 100-to-1 longshot to upset Lamar Alexander.