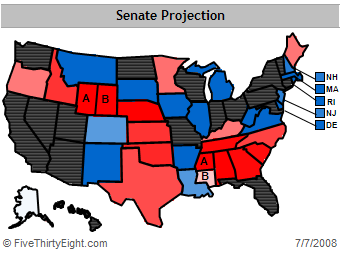 There’s been very little in the way of Senate polling this week (Presidential polling, as you may have noticed, also slowed to a crawl over the weekend). But the handful of exceptions are as follows:

– In Louisiana, a Southern Media & Opinion Research poll shows Mary Landrieu’s lead tightening to 6 points, down from 12 points in early April. We still think the fundamentals of this race look fairly good for Landrieu: she remains relatively popular, and is running against a largely undefined opponent with marginal fundraising numbers.

– Public Policy Polling has polled North Carolina again, and shows Elizabeth Dole expanding her lead to 14 points, up from 8 points last month. It looks like Kay Hagan might have gotten a bit of a bounce surrounding her primary victory which is now receding, and the Democrats are in danger of seeing this one downgraded to the Kansas/Idaho tier of pickup opportunities.

– Rhode Island has been polled for the first time, with Rasmussen showing incumbent Jack Reed with a huge 72-20 over Bob Tingle, who is a Pit Boss at Foxwoods Casino. Tingle would probably be a pretty fun guy to get a beer with, but this race will not be competitive.

And that’s pretty much it. There are also Rasmussen numbers out in states like Massachusetts, Alabama and Georgia, but nothing that would lead us to change our characterization of those races as being non-competitive.

There are, however, a couple of small methodological refinements. Per the rule that we instituted on the Presidential side of things last week, the most recent poll of a state is now guaranteed a minimum weighting of 0.25. This brings a November Idaho poll into play. There was also an internal Idaho poll released last week by Democratic candidate Larry LaRocco that showed very similar numbers, but we do not include it because it violates our ban on internal polls.

Speaking of which, I have delisted the three Public Opinion Strategies that were included before, which had been conducted on behalf of the U.S. Chamber of Commerce. Our rule will be to exclude any polls conducted on behalf of (i) candidates for office, or (ii) registered Political Action Committees (which things like the DNC and USCC are, but something like Daily Kos isn’t) unless they are conducted with a bipartisan partner or the organization has a long and demonstrable history of reporting all its polling to the public record.

Finally, a state’s partisan ID index (based on 2004 exit polling) is now showing up as statistically significant and has been added to the regression model.

Overall, we now project the Democrats to hold 55.5 seats after the election (not counting Sanders and Lieberman), down slightly from 55.7 last week.