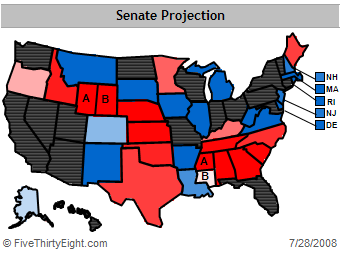 As a rule, races for the Senate break late — and so we should not expect too much organic movement between now and Labor Day. Indeed, our overall projection remains unchanged from last week. We still project the Democrats to control 55.3 seats after the November elections, not counting Sens. Sanders and Lieberman. However, there has been a bit of movement in individual races.

Colorado has moved from Likely Democrat to Lean Democrat on the basis of somewhat stronger polling for Bob Schaffer. Both Quinnipiac and Rasmussen show the race tightening — Quinnipiac, in fact, had the race tightening all the way to a dead heat, although it appears that their sample might have undercounted Democrats. Our regression model had expected some tightening in this race. At the end of the day, however, Mark Udall is probably closer to the median of the Colorado electorate than is Bob Schaffer — Mark Udall is far more of a moderate than his cousin Tom in New Mexico — and remains the more compelling candidate.

We now characterize Alaska as ‘Lean Democrat’ rather than ‘Toss-Up’/’Tilt Democrat’, as new Rasmussen polling shows Mark Begich with an 8-point lead — his largest-ever advantage in a public poll. Ted Stevens is probably the least popular incumbent up for reelection this year — although John Sununu in New Hampshire makes it close — and we will begin to place pressure on Begich through his cash-on-hand advantage, while Begich tries to run out the clock. But it does appear that Begich has the edge for now.

There is also some interesting polling in New Hampshire, but it is contradictory. Rasmussen and UNH show the race tightening toward John Sununu*, while ARG has Jeanne Shaheen expanding her lead. Likewise, in Minnesota, Rasmussen has now released two polls in a row that gave a slight edge to Al Franken, while Quinnipiac shows Norm Coleman ahead by a fairly comfortable margin.

Also keep an eye on Georgia, which holds its Democratic primary run-off next week between Vernon Jones and Jim Martin. We list Jones as our default candidate because he got the largest share of votes in the initial primary, but Martin probably ought to rate as the favorite in the run-off, as he is likely to consolidate support from among white voters who had initially voted for a candidate like Dale Cardwell**. Electorally speaking, it would be a good thing for Democrats if Martin won the seat. Jones would not make the race competitive, Martin has polled close enough that he may be able to put some pressure on Saxby Chambliss and hope for a mistake, or to benefit from Obama turnout coattails.

* While we give UNH a pretty good rating, Laura Clawson at Blue Hampshire says there’s good reason to be skeptical.

** Frankly, this precise scenario is why a lot of Southern states tend to use the run-off system.