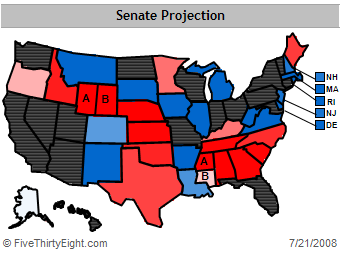 As our travel prevented a Senate update from getting out last week, today’s numbers incorporate two weeks’ worth of polling. They also incorporate second quarter fundraising numbers, which looked better for the Democrats than they did for the Republicans in most cases.

In Oregon, the race appears to be tightening, as Gordon Smith has gone from a 76 percent favorite to win re-election to a 64 percent favorite. Not only did Jeff Merkley beat Smith in fundraising for the quarter, but he also held a polling lead for the first time, as Rasmussen showed him ahead by 2 points. This is beginning to differentiate itself from superficially similar races like Minnesota and appears to be a top-tier pickup opportunity for the Democrats. Smith, for his part, has had trouble staying on message, touting his relationship with Barack Obama in recent advertising.

Kansas, meanwhile, has gone from Likely Republican to Safe Republican, as we now attribute Pat Roberts with a 99 percent chance of winning re-election. This is principally on the strength of new Rasmussen polling that shows Roberts 28 points ahead and with strong favorability ratings. On paper, it is difficult to perceive the pickup opportunity here: red state, reasonably popular incumbent who has had better than a 10:1 fundraising advantage.

Maine remains more viable as a competitive state, but is not really coming together for Tom Allen, as Rasmussen showed Susan Collins holding onto a 10-point lead whereas SMS Atlantic — in a now somewhat dated survey — had her ahead by fully 25 points. Allen’s fundraising has been quite good, and there is still a lot of money to be spent in this race, but I don’t see the angle for defeating Collins, as both Mainers and Collins are a little too sophisticated to be taken by the “Ooga Ooga Republican Bad!” line of argumentation.

A couple other races have shifted slightly. We now classify New Jersey as “Safe Democrat”, as Rasmussen, the one agency that had shown the race competitive before, now has Frank Lautenberg with a 13-point lead. Lautenberg is old and sometimes ineloquent enough that there is a little bit of Macaca potential in this race, and Dick Zimmer is a relatively serious opponent, but it will likely take some sort of external event to shift these numbers. North Carolina, meanwhile, has shifted slightly more Republican, as Elizabeth Dole continues to hold on to a lead in the small double digits as time winds off Kay Hagan’s clock.

With races like Maine and North Carolina becoming more difficult for them, the prospect of Democrats controlling 60 seats has dimmed slightly and now rates at about 14 percent (or 8 percent if Joe Lieberman is not counted as a Democrat). In order to achieve the 60-seat threshold, the Democrats will need to win all five races that we presently classify as “tilt” or “lean”: these are Alaska, Mississippi, Oregon, Kentucky (where Bruce Lunsford has dumped a bunch of his own money into the race) and Minnesota. The Democrats face a decision point soon as to whether to try and consolidate their efforts in those states, or to try and put something exotic like Texas or Idaho into play.