Although the Democrats have gained ground in a handful of key races, their chances of picking up a working, 60-seat majority in the 111th Congress have diminished. 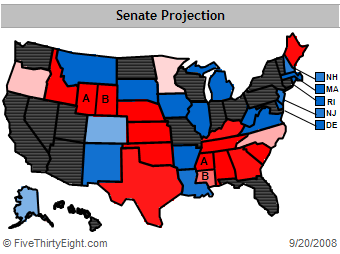 The principal states for Democratic gains are in Minnesota, where Al Franken now rates as having a 42% chance to upend Norm Coleman, up from 29% in our last update, and in Oregon, where Jeff Merkley now has a 38% chance of beating Gordon Smith, considerably up from 22%. The Democrats have also picked up a little bit of ground in North Carolina, where the polls tightened significantly as of about a month ago and have remained that way ever since.

The good news for Democrats, however, ends there. Sarah Palin’s candidacy has resurrected Ted Stevens’ prospects in Alaska, who now has a 25% chance of retaining his seat, up from 12% in the last update. There is no small irony in the fact that Palin, who has branded herself as a reformer, is carrying coattails for one of the most corrupt members of Congress. Nevertheless, having turned our collective gaze toward Alaska politics, I think we can perhaps better understand how Stevens’ success in bringing pork to Alaska — though it makes him an object of ridicule elsewhere — is fairly popular with the natives. Democratic challenger Mark Begich remains ahead in all polling and is still the favorite, but with the Obama campaign in the process of pulling its resources out of the state, the situation there is much more tenuous.

Palin — or the renewed enthusiasm among GOP base voters that she is associated with — has also pushed some second- and third-tier races in red states back toward the Republicans. These include Idaho, Kentucky, and Georgia, where Republican leads have expanded, perhaps to the point where the races are out of reach. Nor have the Democrats been able to gain any traction in Maine, where Susan Collins’ approval ratings remain sky-high.

The Democrats still retain one fairly clear path to 60 seats, assuming that Joe Lieberman and Bernie Sanders are counted with the majority. (I think, by the way, that there has been too much attention given to the party label that Joe Lieberman will choose to affix himself with. He is likely to stand with the Democrats on cloture votes related to domestic policy, which is why the 60 seat number is salient in the first place). This path would involve flipping Virginia, New Mexico and New Hampshire — all of which remain near locks for the Democrats — along with Colorado, Alaska, Minnesota, Oregon, North Carolina, and Mississippi/B.

It’s that Mississippi special election race that has yet to really come together for the Democrats, as Republican Roger Wicker has inched upward in the polling since the summer, when the race was closer to a dead heat. But it remains by far the best opportunity the Democrats have to acquire a 60th seat, a fact which will make some coastal Democrats unhappy, since Ronnie Musgrove would probably be more conservative than several Republican members of Congress.

The Democrats could also try and put another race into play. The Scott Kleeb people insist that Nebraska will tighten as their candidate’s name recognition improves, and the Democrats also field a compelling candidate in the form of Andrew Rice in Oklahoma. But time is running fairly short, and either race — as well as something like Kentucky or Texas — will probably require at least one fairly significant gaffe from the Republican opponent. On the flip side, the Republicans have yet to make a good race of Louisiana. New Jersey, where an array of recent polling has Dick Zimmer down in the high single digits, might make for the more interesting sleeper race.