Anti-incumbent sentiment is as strong as it has been all year, and that is working to the benefit of the Democrats in our latest Senate projections: 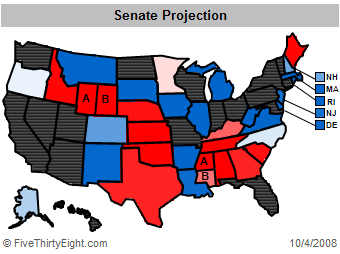 The Democrats have gained ground in several races this week, including North Carolina, where for the first time we have Kay Hagan listed as a favorite to unseat Elizabeth Dole, New Hampshire, where Jeanne Shaheen appears to have bounced back after some tight polling in mid-September, and Mississippi, where Rasmussen shows the race closing to two points. In addition, polling in Georgia and Texas indicates that those races may be viable pickup opportunities in a wave election, and even Nebraska has tightened a bit, with that race retaining a fairly high percentage of undecideds. 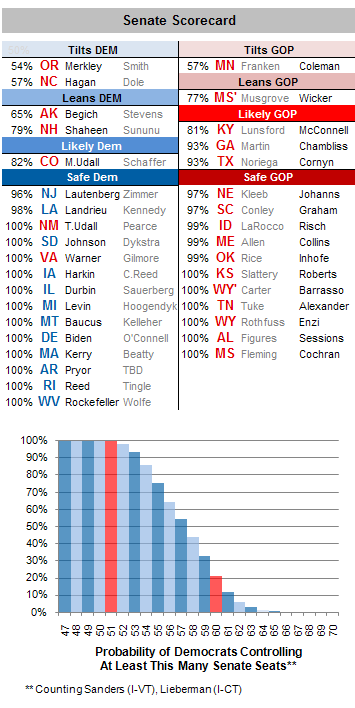 About the only good news the Republicans got this week was in Kentucky, where Rasmussen gives Mitch McConnell a 9-point lead, and is not quite ready to jump on the bandwagon and call that race a toss-up. Republican challengers in Iowa and Michigan have also picked up a bit of ground, suggesting that the anti-incumbent sentiment may to some extent be a two-way street. However, in neither case do the Republicans have a good candidate, leaving them poorly placed to take advantage of it (they remain at least 100-to-1 longshots in each state).

Overall, the Democrats now project as the favorites in seven seats currently held by the Republicans, with anywhere from 3-7 further GOP seats conceivably in play depending on how generous you want to be. This is the strongest position that they have been in all year, and it seems to be improving by the day.