The 2010 Senate contests, I submit, will tell us more than either the House or gubernatorial results next year about the relative status of the two parties and their competitiveness. Why?

For one, historically the president’s party loses an average of about 16 House seats in his first midterm cycle, but there’s really not much of a Senate correction. (The average is less than one seat.) Obviously, the Democrats could still over- or underperform the 16-seat benchmark. But the House results, if the GOP overperforms, are not likely to dethrone Nancy Pelosi. Second, gubernatorial results are likely to be more of a reflection on tough state-level circumstances and the quality of the respective candidates and their campaigns, as we saw in both New Jersey and Virginia. If so, the Republicans may have another Christie/McDonnell-like night to celebrate, even if those victories are not indicative of a national partisan backlash against the Obama Administration and the Democratic Congress. Third, Senate races are statewide federal contests with more heterogeneous, non-gerrymandered electorates that are less directly affected by localized issues. Finally, as The Cook Political Report’s Jennifer Duffy noted in her analysis two weeks ago, there are lots of open-seat Senate races next year. Although candidate effects do matter in Senate races, in open seats the candidate effects are reduced because there are no direct incumbency effects (positive or negative), and so they more closely approximate, though of course are not identical to, partisan referenda. 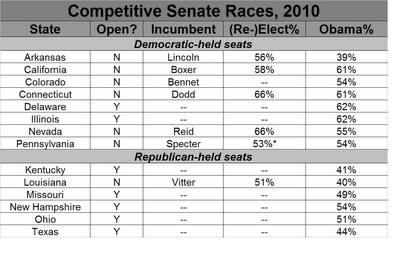 That said, the Senate results will provide a much clearer barometer of voter support for, or antipathy toward, the Obama Administration and unified Democratic control of Washington. Remember the 2004 results? Bush inched up his popular vote margin, gained a mere one net state in the Electoral College (losing NH, picking up IA and NM), the House Republicans’ gain of three seats was entirely accounted for by the Texas re-redistricting, and the GOP lost ground in the state legislatures. What made it overall a good night for the GOP was the net pickup of four Senate seats. Granted, those four net pickups were more than accounted for by five southern Democrats retiring and the GOP picking up all five of their seats, but still. (The net non-southern Democratic gain of one senator resulted from Tom Daschle’s loss and wins by CO’s attorney general Ken Salazar and a certain state senator from Chicago.)

The good news for Democrats is that there are a lot of Republican-held, open-seat races. Looking at the table above, of the six GOP-held seats Duffy lists as either toss-up (5) or leaning Republican (1: Vitter), five of the six are open seats (LA’s Vitter, who has other, post-scandal worries is the exception). Of course, this is why races in states like Kentucky and Texas are considered competitive in the first place. As for seven seats Duffy rates either toss-up (5) or leaning Democratic (2: Lincoln, Boxer), there are just two open-seat contests: the Delaware and Illinois seats vacated by vice president and president and presently occupied by weak Democratic placeholders. The fact that the Democrats have more states in play despite fewer incumbents testifies to their general vulneraability this cycle, as well as specific problems, notably Chris Dodd’s post-economic crisis popularity decline in Connecticut and the inherent skepticism toward Arlen Specter after his party-switch earlier this year.

What you also see is that Democrats are defending competitive seats in more solidly blue states and Republicans in what are generally more toss-up states, at least if you look at presidential results. This pattern has a potentially good news/bad news storyline for each party as well. If team Obama can figure out a way to utilize the president, their databases and appeal to mobilize enough of those so-called “Obama surge” voters from 2008, the Democratic registration and performance margins should pull these incumbents across the finish line. On the other hand, the fact that the GOP seats in play are in more competitive states in the first place would suggest that the GOP is going to be on offense more than defense.

I suspect the net gain for either party will not exceed two seats. There are some primaries yet to determine nominees, so it’s too early to say either way which party should come out ahead. And, as I suggested before, these races will be an important test of the White House political operation.