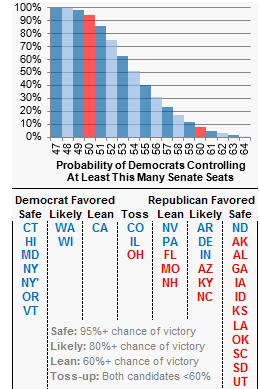 Although national trends continue to move slightly toward the Republicans — since the start of the year, our senate model’s trend estimate has them gaining ground on the Democrats at the rate of about 1 point per month in a typical race — that momentum was offset this month by recruiting failures in Wisconsin and New York, where Tommy Thompson and George Pataki declined to run. Therefore, our simulation projects Republicans to gain a net of 4.0 Senate seats in this November’s elections, a figure unchanged since last month.

However, this figure is somewhat misleading: although the model expects the Republicans to end up with 45 seats on average, it also thinks they’d end up with 48 seats if the election were held today. The reason for the discrepancy is not because the model is predicting a shift back in momentum toward Democrats before November; it makes no assumptions whatsoever about this. Rather it is because, if there were to be such a shift, the Democrats would be a position to hold or flip several seats (such as Colorado, Ohio, Missouri, Pennsylvania, and New Hampshire) that they now narrowly project to lose. A large shift could also put North Carolina, Kentucky, Nevada and Indiana into the Democratic column. The Republicans, on the other hand, are close to “maxing out” on their potential gains, other than perhaps in Illinois, California, and Washington if Dino Rossi runs there.

The Republicans now have only a 6 percent chance of an outright takeover of the Senate, according to the model. Note, however, that our simulations had also shown this possibility to be somewhat overstated to begin with; it would have required a clean sweep of all competitive races, as well as a recruiting success in New York or Wisconsin. The Republicans’ best chance to flip an off-the-radar race is now in Washington state, where they have a 12 percent chance to win Patty Murray’s seat overall but a roughly 30 percent chance if Dino Rossi runs. The Republicans also have a very small chance of flipping Wisconsin (5 percent), Oregon (3 percent) or New York (3 percent). The simulation does not account for the possibility that someone like Ben Nelson or Joe Lieberman would switch parties, which is perhaps their most likely path to 51 seats at this point.

A substantial shift in the national momentum could still benefit Democrats, who do have a number of opportunities to play offense, such as in Ohio and Missouri. They retain a 7 percent chance of actually adding one or more seats and restoring a 60-seat majority. In general, however, the range of possibilities has narrowed somewhat.

For the time being, the simulation does not account for the possibility that Charlie Crist will run as an independent in Florida; our belief, however, is that Republican Marco Rubio would remain favored to hold the seat even if this were to occur.

In addition to New York and Wisconsin, polls have the Democrats’ position improving in Ohio and Washington. However, it is deteriorating in Pennsylvania, Illinois and New Hampshire.

There appears to be little in the way of darkhorse contests which are only now coming onto the radar screen; the closest to an exception is probably Arizona, where Democrats would have a roughly 15 percent chance of winning the seat of J.D. Hayworth were the nominee. Although some Democrats are excited by the entry of Labor Commissioner Michael Thurmond into the Georgia senate race, the model thinks he has only about a 2 percent chance of beating Johnny Isakson. There is some evidence that Republican Rob Simmons is gaining ground on Attorney General Richard Blumenthal in Connecticut; however, he is probably coming from too far behind, and a less competitive candidate, Linda McMahon, is the more likely Republican nominee there.

A complete rundown of all races follows below.