Senator Robert Byrd of West Virginia passed away early this morning; he was the longest-serving Senator in United States history, having first been elected to the Senate in 1959. 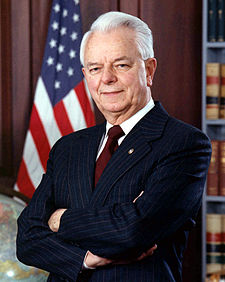 West Virgina Democratic governor Joe Manchin will appoint an interim successor for Byrd once a vacancy is declared. The question is what happens after November. Yesterday, we identified the relevant West Virginia statute, which stipulates that when a Senate vacancy occurs more than two years and sixth months prior to the end of a Senator’s term, a special election will be held at the upcoming general election to select the candidate’s successor. Because Byrd passed away this morning — two years, six months and six days prior to the end of his current term on January 3, 2013 — that would seem to imply the likelihood of an election later this year. Democrats might not be favored in such an election, although their odds would be buoyed if Manchin, a popular incumbent who will be term-limited in 2012, decided to run for the seat himself.

Although most other outlets, including the Associated Press and The Hill, have come to the same reading of West Virginia’s succession laws as we have, a few others have come to a different conclusion; presumably this will become clearer over the course of the day.

Note also that a vacancy has not been declared yet. West Virginia’s statutes for U.S. House seats actually provide the governor with a 10-day window to declare a vacancy — however, it is not clear that the same procedure applies for U.S. Senate seats.

UPDATE: Commenter NRH points toward another possible ambiguity in the laws.

UPDATE x2: We are trying to contact Governor Manchin’s office as well as the WV Secretary of State to do some actual reporting on this.

UPDATE x3: The Washington Post’s Paul Kane points toward the same ambiguity that our commenter found. We pretty much need to hear from someone in Charleston before we can say definitively what’s going on.

UPDATE x4: While I wait to see if phone calls and e-mails are returned, Hotline’s Reid Wilson probably has the best take on this, concluding that a special election is unlikely because no candidates have, per state law, “filed a certificate of candidacy [and] been nominated at the primary election next following such timely filing”. (West Virginia held its primaries in May). This provision seems marginally self-defeating — how could someone file for a vacancy that didn’t exist yet? — but there is case law on the subject suggesting that Manchin would be well within his rights to wait until 2012 to hold the election.