Speaking for a moment as a Democratic partisan, I can’t say that I’d be thrilled with the selection of Evan Bayh as Barack Obama’s VP nominee. But this has more to do with personality factors — my feeling that Bayh is a little dull and drab, and that Obama may underestimate the importance of maintaining high levels of excitement among the Democratic base — than anything having to do with his voting record.

Bayh gets a bad rap in the liberal blogopshere because he is perceived as a centrist. There is a grain of truth in that; he certainly isn’t Bernie Sanders. But he also isn’t from Vermont. He’s from Indiana — and I would argue that Bayh is about as liberal a senator as Indiana is likely to elect.

The chart below compares two things. Along the left-right axis is the liberalness each state’s electorate, as determined by how voters identified themselves in 2004 exit polling. Along the vertical axis is the liberalness of each of the 100 sitting senators, as determined by averaging their VoteView ordinal ranking from the 108th, 109th and 110th Congresses. Democrats, naturally, are demarcated in blue, Republicans in red, and independents in green. 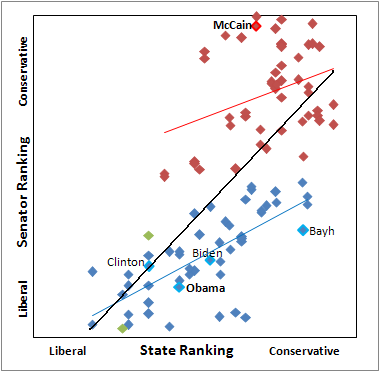 Unsurprisingly, there is a rather strong relationship between the liberalness of a state and the liberalness of its senators, whether or not one separates the senators by party (the red and blue trendlines) or groups them all together (the black trendline).

We can think about this a bit more scientifically by comparing a senator’s VoteView ranking — lower rankings indicate more liberal voting records — with that expected of a typical senator from that state, regardless of his or her party. This is represented by the black regression line in the chart above. We would ordinarily expect a senator from Indiana to have a VoteView ranking of 73.0 — squarely in the middle of the Republican party. Bayh’s ranking, instead, is a 33.3 — only slightly more conservative than an average Democratic senator. Relative to his state, Bayh is the third most liberal senator, trailing only Tom Harkin and Sherrod Brown:

If we look at the senators relative to both their states and their party — these are the red and blue regression lines — Bayh is in a tie with Sheldon Whitehouse as the 5th most liberal Democrat.

There will undoubtedly be a myriad of objections to this methodology, but the point is that governance does not occur in a vacuum: a senator has a goal of championing legislation in line with his ideology, but he also has a goal of getting re-elected. Indeed, there is some evidence that Bayh has become more liberal. Here is Bayh’s VoteView ranking in each of the last four Congresses — remember that lower scores indicate a more liberal voting record.

Bayh became somewhat liberal between the 108th and 109th Congresses. What happened between the 108th and 109th Congresses? Bayh won re-election by a landslide margin, and perhaps recognized that he had a little bit more wiggle room to move from the right edge of the Democratic Party more toward the Party’s mainstream. The only reason this might occur, I would argue, is that Bayh is at heart a fairly progressive senator.

One needs to remember that Evan’s father, Birch Bayh, had quite a strong progressive track record, being the principal architect and sponsor of both the 26th Amendment, which lowered the voting age to 18, and the Equal Rights Amendment. Bayh eventually lost to Dan Quayle in the Republican landslide year of 1980 as the country passed into the present, highly partisan era, as Quayle successfully attacked Bayh on his liberal voting record.

As a candidate for national office, free from the constraints of electoral politics in a red state like Indiana, Bayh might surprise both Democrats and Republicans with how liberal he turns out to be. Bayh’s positioning in the Senate has not been notably different from either Al Gore or John Edwards, who are two of the left’s heroes. The downside to Democrats? Because Bayh is far more liberal than you’d expect of a typical senator from Indiana, this would be one of the most damaging Senate seats for them to lose.