Note: This article follows on to one published earlier today on cell phone-only voters in the UK.

The prominent position of internet polling outfit YouGov among UK pollsters adds an additional wrinkle to our analysis of selection bias among pollsters. In the US, internet pollsters are not highly considered, mainly because of the perceived unreliability of internet polling and because telephone polls make up the vast majority of surveys taken. However, YouGov’s reputation in the UK has been bolstered by strong performances in the 2005 election and 2009 London mayoral election, and by the fact that they are the lowest cost pollster in a cut-throat market.

Among the 65-plus age group in the UK, more than 60 percent have never used the internet — significantly down from years previously but still very significant. Not surprisingly, the youngest demographics have much more exposure to the internet, to the point where a negligible number of people 15-24 have not used the web. 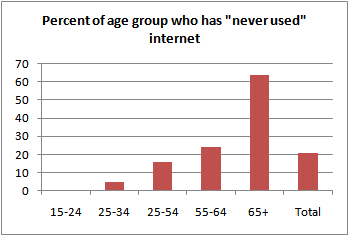 YouGov deals with its heavy selection bias as most pollsters do, by weighting their polls to reflect overall societal trends. Specifically, when inviting people to take part in political attitudes polling, they ensure that representative numbers of each age group are included.

However, just weighting the responses of the relatively small number of older people who participate in the poll does not account for differences in opinion between the types of 65-plus voters who are online and those who are not. Internet usage has a strong educational (and associated socio-economic) component as well, rendering the internet sample prone to additional selection bias. 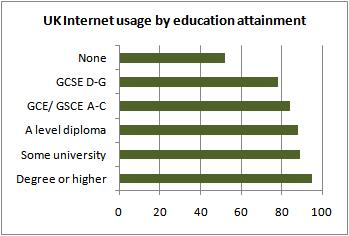 The oldest voters are the most reliable, consistently turning more than average. 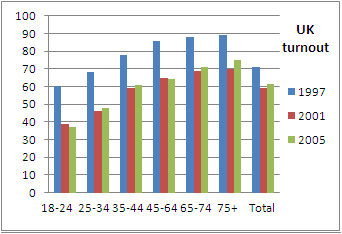 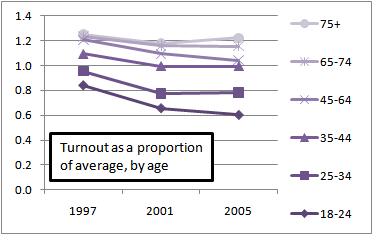 1. YouGov polling may be failing to capture a panel group of non-internet 65+ voters, particularly those who are from modest backgrounds. This voting group, especially those who did not vote in 2001, are undoubtedly up for grabs this time around, and would tend to be traditional Labour or Lib Dem voters.

2. Panel effects that may result from this sort of selection bias are likely more pronounced the more targeted the sample area — for example a particular region or consituency — than it is at the national level. This would suggest that even YouGov’s national numbers may be fairly reliable, marginal seat polls or individual consituencies — especially those outside London — may be suspect.
—
Renard Sexton is FiveThirtyEight’s international affairs columnist and is based in Geneva, Switzerland. He can be contacted at sexton538@gmail.com