When I first heard the news about the American military operation that killed Osama bin Laden, I was pretty certain that the popular press was going to overstate its impact on Barack Obama’s re-election chances. I wrote an article to that effect last night.

After reading the reactions today, though, I’m not certain that some analysts aren’t underestimating the impact instead.

Jonathan Chait of The New Republic says the political ramifications of killing Osama bin Laden will be “minimal to nonexistant.” Jamelle Bouieof The American Prospect argues that Bin Laden’s death “does nothing to change the basic facts of Obama’s political situation.” Kevin Drum of Mother Jones doubts that Mr. Obama’s re-election prospects have been improved. (All of these are liberal or center-left commentators, by the way.)

It’s true that the effect of the news is very difficult to quantify. Is killing Bin Laden akin to the capture of Saddam Hussein, which caused a relatively small and short-lived jump in George W. Bush’s approval ratings? That probably understates the case: Osama bin Laden did orders-of-magnitude more damage to America than Saddam did. But is it tantamount to achieving victory in a war? It’s not that either, exactly: Bin Laden is just a single (very) high-value target in what United States policymakers describe as a global campaign against terrorism.

Just because something is difficult to model, though, doesn’t mean that we should ignore it. Political science research has generally found, instead, that foreign policy does matter. Here’s a simple illustration of that.

Gallup periodically collects approval ratings data for presidents in the areas of economic policy and foreign affairs, in addition to the overall ratings. I’ve been able to find at least one data point in these areas for all years since 1981, excluding foreign policy ratings for Ronald Reagan in 1987 and 1988. 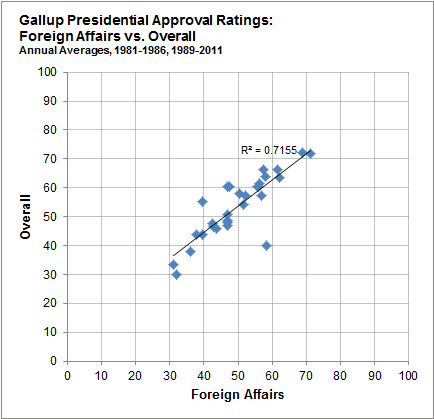 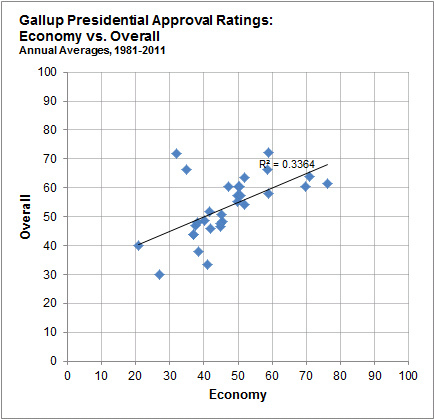 I don’t want to get too carried away with this. The halo effect of a successful presidency can cause a president’s ratings to rise in a number of areas at once, which makes it difficult to deduce cause and effect. And the relative salience of different issues can wax and wane at different times. Up until 24 hours ago, both Mr. Obama and his Republican opponents seemed inclined to make the 2012 election be about the economy. More importantly, so did voters. That’s much better for the G.O.P. than a scenario in which national security had been receiving a greater degree of emphasis.

But Americans, contrary to the way they are sometimes characterized by pundits, can walk and chew gum and the same time — and they consider both foreign and domestic policy when they cast their ballots. The killing of Osama bin Laden is going to be perceived as unambiguously good news by almost all Americans. It makes it easier for Mr. Obama to make the case that the country has made progress since he took office.

Yes, Mr. Obama is still far from able to run commercials like those “Morning in America” ads Ronald Reagan used in 1984. Unless the economic indicators significantly outperform consensus expectations, the election is still liable to be fairly close, with Mr. Obama hardly assured of coming out on top.

But killing Osama bin Laden, the world’s most wanted terrorist, is going to be a point in Mr. Obama’s favor. I really don’t know exactly what impact it will have, and the magnitude of the bounce that Mr. Obama receives in the polls over the next few days and weeks may not shed much light on that question. But to claim that it will have no impact at all is as daft as claiming that Mr. Obama is now a shoo-in for re-election.