Facebook maps of sports fandom, such as the one Facebook just published about Major League Baseball, are one of my favorite things: 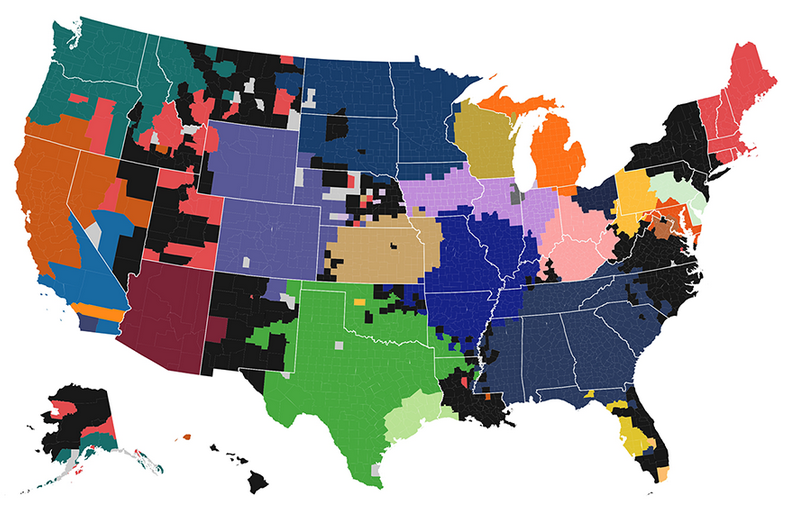 But as Will Oremus of Slate notes, this approach conceals important information. Facebook’s map, which identifies the team with the most “likes” in each U.S. county, might give you the idea that the Texas Rangers, Colorado Rockies and Minnesota Twins are exceptionally popular. Indeed, they are reasonably well-liked over a broad geographical area. But most of the counties in their territories are rural and have low populations. The problem is analogous to looking at maps of presidential election results by county, which might convey the impression that Mitt Romney won the 2012 election when he did not.

Another way to evaluate a baseball team’s popularity is to look at data from Google Trends.

Google Trends recently unveiled a beta feature in which it aggregates search terms into topics. For example, searches for “St. Louis Cardinals,” “Saint Louis Cardinals,” “cardinals baseball” and so forth, are grouped under the same topic heading. (The feature can also theoretically avoid false positives; for example, searches for “Texas Ranger” that were seeking information on the defunct television show will not be confused with those for the baseball team.) In most cases, this functionality seems to be quite smart; the topic “Miami Marlins” seems to pick up searches for “Florida Marlins” as well, as the team was known prior to 2012.

The chart below lists the number of Google searches for the topic associated with each MLB team. The figures listed are relative to the league average. (The Atlanta Braves’ popularity, for example, is listed as 1.14, which means that they are searched for 1.14 times as often as the average MLB club.) They reflect Google searches worldwide since 2004, except in the case of the Washington Nationals, where I’ve run the numbers from April 2005 forward, because the team played in Montreal before that time. 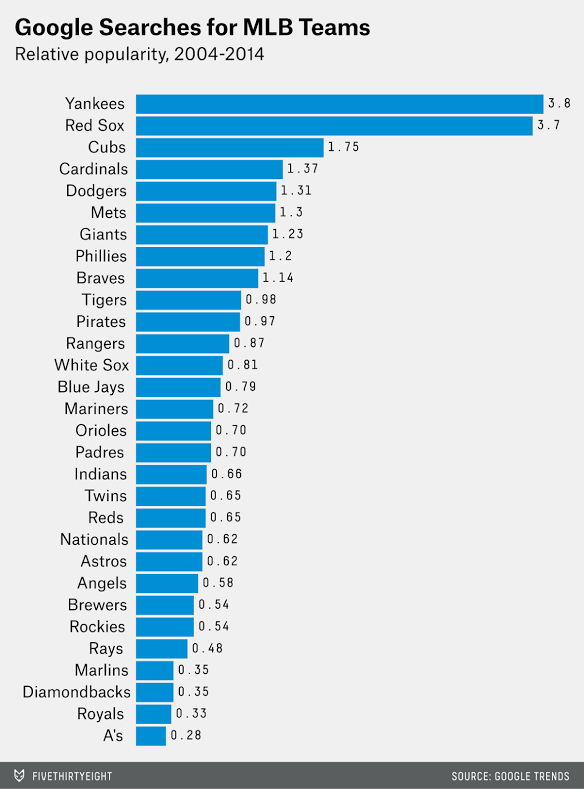 By Google searches, the Rangers have only about average popularity, while the Twins and the Rockies are below average. Conversely, the New York Mets, who didn’t win a single county in the Facebook map, are the sixth-most searched for team worldwide.

The most striking feature of the Google data, however, is the dominance of the New York Yankees and Boston Red Sox. They are searched for 3.8 and 3.7 times, respectively, more often than the league average, and more than 10 times as often as the least popular teams.

The Yankees, of course, have a large population to draw from: There are roughly 20 million people in the New York metro area. How does each team’s Google search popularity compare to the size of its television market?

We make that comparison in the table below. I’ve listed each team’s popularity on Google, the relative size of its TV market (markets with two teams are divided evenly between them), and then taken the ratio between the two. 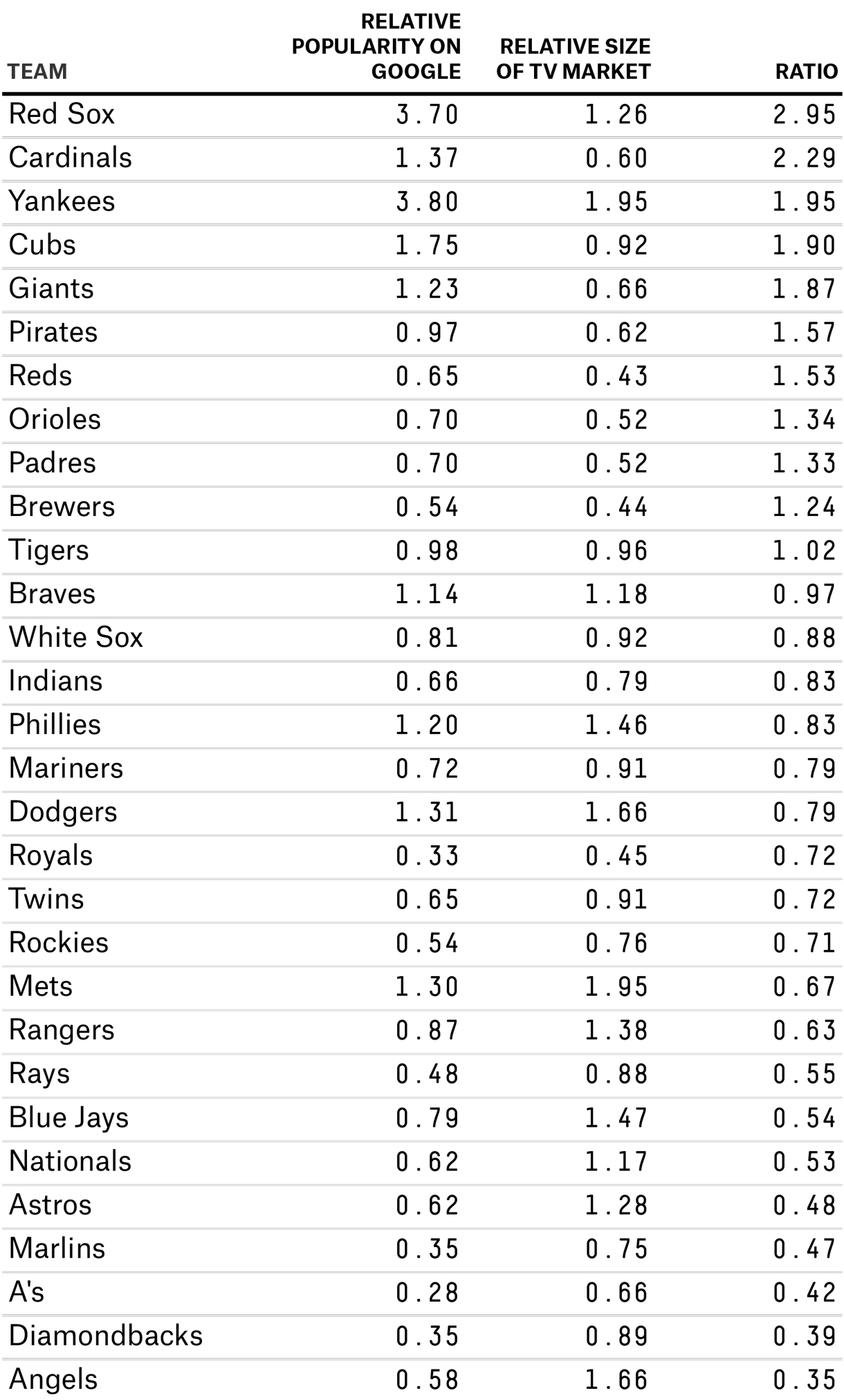 The Yankees rank third even by this standard. But the Red Sox are a clear No. 1 and are about three times as popular as you’d guess from the size of the Boston media market. The Cardinals, Cubs, Giants, Pirates and Reds also over-perform relative to their market size.

Red Sox haters might complain that the team’s market is much bigger than Boston alone: They are also the “local” team in the rest of New England (except for western Connecticut).

But extent to which a team’s popularity expands may have a lot to do with how well the team is run — and how often it wins. The Toronto Blue Jays theoretically have a whole country to themselves — but they are unpopular relative to the size of the Toronto market itself, let alone as compared to the population of Canada. The correlation between a team’s Google search popularity and its number of post-season appearances since 2004 is .62, a fair amount higher than that between its popularity and its market size (.38).

Performing worst relative to its population are the Los Angeles Angels of Anaheim. I’m somewhat suspicious of this datapoint, however. There are so many variations on the team’s name (“LA Angels,” “Anaheim Angels,” “That Team With Mike Trout and 24 Other People”) that Google Trends might not be picking up on all the ways to search for them, even with its new-and-improved algorithms.