Things have not been going particularly well of late for French President Nicolas Sarkozy. With approval ratings falling through the floorboards and scandals cropping up in all corners of his administration, what once looked like a telegenic center-right Presidency bound for reelection now seems imperiled.

Today, however, no less than three separate, yet interlinked, affaires on politics and money are currently rocking the French polical scene, with at least four ministers, as well as the President, linked to the dirt.

1. Campaign finance scandal. In short, Sarkozy and his Labor Minister Eric Woerth have been accused of illegally funneling 150,000 Euros from France’s wealthiest woman, Liliane Bettencourt (heiress of the L’Oreal fortune) to his campaign accounts. While the details have been murky, with the accuser changing her story a few times, French state prosecutors have opened a case on the matter, threatening the political lives of Woerth and by extension Sarkozy.

The UMP claim the matter is fully political, accusing left wing operatives of trying to discredit Mr. Woerth as he tries to raise the nation’s retirement age from 60 to 62 in order to balance the books — a matter of no small importance to the union-driven left.

France’s campaign finance laws restrict political contributions from individuals to 4,600 Euros per cycle, and do not allow donations by corporations, unions, PACs etc., instead using public funds for all eligible candidates. However, in contrast to US regulations, political donors may deduct a portion of their givings on their tax returns.

2. Bettencourt tax evasion. If things were not difficult for Liliane (aged 87), she has also been accused of massive tax evasion via offshore accounts in Switzerland, the Caymans, the Seychelles, and elsewhere. The case is built on, among other things, many hours of surreptitious recording of meetings between Bettencourt and her financial advisor, carried out by the butler.

Here is where things get fishy once again. Before becoming Labor minister in March of this year, Eric Woerth was Sarkozy’s Finance Minister, making his name on a programme of aggressive pursuit of offshore tax evaders, of which apparently Mrs. Bettencourt was one. However, it turns out that Woerth’s wife, Florence, worked for the company of Bettencourt’s financial advisor, and was involved with the management of some of her accounts, though it is unclear whether the accounts fingered in the offshore tax scheme. The media and political left have leapt upon the possible conflict of interest and called for Woerth’s resignation, which he has refused.

On the sidelines, of course, the estranged daughter of Bettencourt is in an ongoing legal battle with her mother and a famous photographer friend over parts of the family’s fortune.

Sarkozy took the Presidency back in May 2007 with a convincing 53-47 second round result over the Socialist Party’s Ségolène Royal (Barack Obama prevailed over John McCain by a similar margin, 52.9 percent to 45.7 percent). Then a month later, Sarkozy’s UMP party (Union pour un mouvement populaire, or Union for a Populist Movement) won a big majority in the National Assembly, earning 345 deputies (about 60 percent of the MPs) as compared to the 227 earned by the left-side opposition.

While his political position deteriorated fairly quickly — he had a negative net approval rating before the end of his first year in office — the center-right coalition held on to a majority in the French Senate in 2008 elections, and trounced the Socialists in the 2009 European Parliament elections (gain of 12 MEPs for the UMP, loss of 17 for Socialists, gain of 8 for the Greens).

However, the slow decline turned into a major slide this year, as the Regional elections in March confirmed that many voters a very skeptical of the right’s agenda. Of the 22 régions of metropolitan France, the left prevailed in 21, leaving only the eastern frontier region of Alsace (bordering Germany) under UMP governorship.* 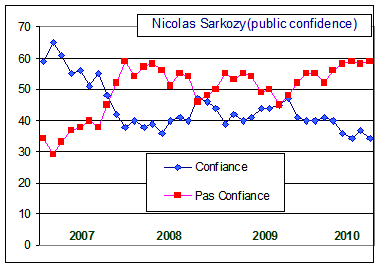 Using numbers from the pollster and market research firm CSA (who do monthly approval ratings polling for various French newspapers), one can see the slow but steady descent in Sarko’s approval rating. One interesting side point is that while British and American firms ask respondents whether they “approve of” a person and/or the job they have been doing, each French survey I have seen asks instead whether the respondent “has confidence in” the target person or not (often with just two options, as above). 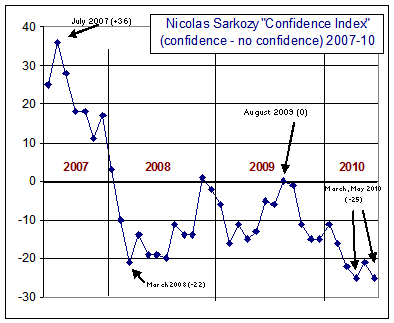 Sarkozy’s best numbers, naturally, came just after the landslide victory of the UMP coalition in the 2007 Parliamentary election, with his net approval rating peaking in July 2007 at plus 36. Though many in France viewed his election as President in relative terms — a left-leaning French friend explained that most centrist voters saw Sarkozy as the “least worst option,” as opposed to the “clueless” Ségolène Royal — most were willing to give him a shot, notwithstanding his mixed records as Minister of Interior and Minister of Finance.

His carefree style and aggressive programme (e.g. lowering taxes on the upper middle class and removal of inheritance taxes) quickly drove away any conciliators on the center-left, however. At the same, personal issues like his high-profile divorce in October 2007 and subsequent rapid courtship of Italian superstar Carla Bruni (they married February 2008) distracted the front pages for several months, a growing sense of distrust was manifesting.

An additional underlying factor was that Sarko’s reputation of cavorting with his friends and supporters among the extremely wealthy left an impression of privilege and disconnect on many centrists and even some in the center-right. It is within this paradigm that the recent accusations and revelations begin to have cumulative effects on his Presidency.

All things point to a wide open April 2012 Presidential campaign, where Sarkozy will have rivals on both the right, with former Chirac Prime Minister Dominique de Villepin having established his own center-right party, and the left (with a new leader, Martine Aubry, since November 2008). In the meantime, Sarko has less than two years to resurrect his image, or he will find himself being the first French President to serve just one term since d’Estaing in the 1970s.