Ten days after Rick Santorum’s surprisingly strong wins in the Minnesota and Colorado caucuses, there is no sign yet that his surge in the polls is abating. 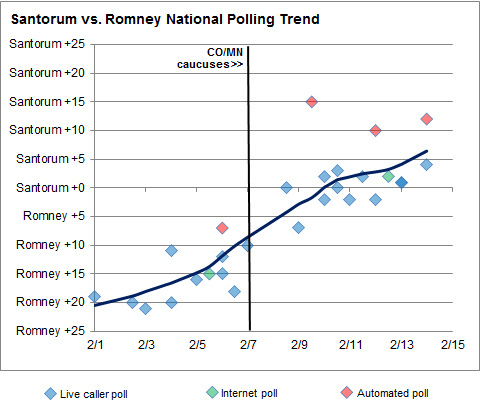 Interpretation is rendered more difficult, however, by the fact that methodological differences among the polls seem to be producing different results. Traditional telephone polls using live interviewers have tended to show an essentially even race or Mr. Santorum with a small lead. But polls conducted using automated scripts have shown Mr. Santorum with a fairly clear advantage by margins ranging from 10 to 15 points.

The differences may reflect the fact that automated polls normally have lower response rates, and therefore can tilt toward the candidate with the most enthusiastic supporters. Evidence suggests that Mr. Santorum’s supporters are more enthusiastic than Mr. Romney’s.

In an ideal world, pollsters should be trying to reach a random sample of voters. To the extent that enthusiasm provides a tangible advantage to a candidate by making his supporters more likely to turn out, pollsters can then account for that by applying a likely voter model.

Nevertheless, enthusiasm can provide a tangible advantage to a candidate in primaries and caucuses, where turnout is generally low. Mr. Santorum has overperformed his polls in most of the early-voting states so far.

There is certainly the chance that Mr. Romney can overcome his deficit with Mr. Santorum in states like Michigan and Ohio as his advertising resources take hold.

Nevertheless, Mr. Santorum’s bounce has already had considerably more staying power than those of some of his rivals. Newt Gingrich’s surge in the national polls, for instance, peaked just 24 or 48 hours after his victory in South Carolina, whereas Mr. Santorum’s has now persisted for more than a week.

Indeed, Mr. Santorum may be benefiting from the continued decline in Mr. Gingrich’s numbers. Recent polls have suggested that more of Mr. Gingrich’s supporters were winding up in Mr. Santorum’s column, which may be helping to offset any gains that Mr. Romney is making because of advertising.