In Michigan, the betting market Intrade always had Mitt Romney favored — even when he fell behind Rick Santorum in the polls. That prediction looked prescient in the end.

We now see a similar pattern in Ohio. Rick Santorum has led in the last several polls there, including narrow leads in two polls conducted after his loss in Michigan. The FiveThirtyEight forecast model gives Mr. Romney some credit for his momentum in the state — but still thinks he is more likely than not to take a loss there, and makes Mr. Santorum the 64 percent favorite.

That is close enough that the contest could obviously go either way, but I don’t quite see the logic for concluding that Mr. Santorum has become the underdog — as Intrade now does, which gives him only a 39 percent chance to win.

The value of markets like Intrade is that they can account for a lot of other factors in addition to the polls — unlike the FiveThirtyEight primary model, which looks at the topline numbers from the polls alone. But when I look at those nonpolling factors in Ohio, they don’t seem so favorable to Mr. Romney.

Perhaps the argument is that Mr. Romney closes strongly in crucial primary states — something that was true in Arizona, Florida and Michigan. But that was decidedly not the case in South Carolina — nor, for that matter, in New Hampshire, when Mr. Romney’s numbers faded some over the past week, although he had plenty of margin to spare.

Mr. Romney, as usual, has an advertising edge in the state. But it isn’t enormous. Since Tuesday, the pro-Romney “super PAC” Restore our Future has bought about $1.3 million worth of advertising in Ohio — as compared with about $250,000 for the group supporting Mr. Santorum. That’s a big difference if you look at it as a ratio — $5 in new expenditures by Mr. Romney’s “super PAC” for every $1 for Mr. Santorum’s. But a $1.3 million ad buy isn’t that much in an absolute sense in a state as populous as Ohio.

Maybe the polls are insufficiently accounting for Mr. Romney’s momentum? Perhaps, but more often this cycle, polls conducted immediately after a big primary win have represented the high-water mark for a candidate — rather than the start of a shift in his direction.

And unlike in Michigan, the mean to which the polls might revert is not all that favorable for Mr. Romney. Over the broader course of the election cycle, Mr. Romney polled an average of 9 points better than his national polling numbers in Michigan — but 2 points behind them in Ohio. 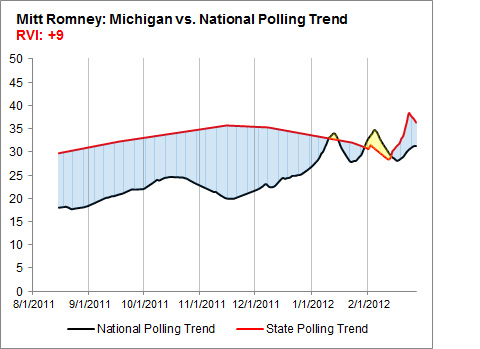 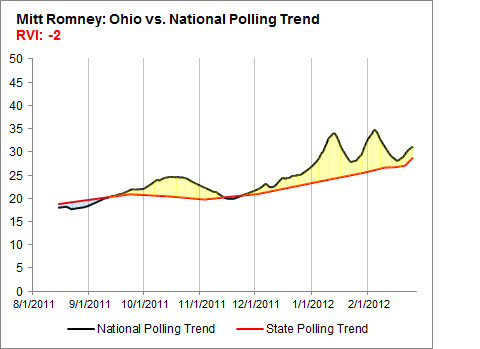 That’s a fairly large gap, and one that would suggest that a narrow 3-point win in Michigan is something of an inauspicious precedent for what Mr. Romney’s prospects might be in Ohio. Indeed, Mr. Romney lost most parts of Michigan outside the Detroit metropolitan area where he grew up. This included the three Michigan counties that border Ohio, where Mr. Romney lost by a combined eight percentage points to Mr. Santorum.

Mr. Romney was harmed slightly by tactical voting in Michigan — some Democrats voted for Mr. Santorum to prolong the nomination fight — but there’s no reason that the same thing couldn’t happen in Ohio. In fact, the labor federation AFSCME recently spent $500,000 in Ohio to attack Mr. Romney from the left.

In Michigan, Mr. Romney was endorsed by seven of the nine Republican House members from the state, as well as by Gov. Rick Snyder and by most other statewide officials.

His support is more tenuous in Ohio. He has been endorsed by three of the 13 Republican representatives, and by the state’s lone Republican senator, Rob Portman. But the state’s governor, John Kasich, has remained neutral so far — and one of Mr. Romney’s more prominent endorsers in the state, Attorney General Mike DeWine, retracted his endorsement last month and switched to Mr. Santorum.

Mr. Romney’s fund-raising has been mediocre in Ohio; he has brought in about $600,000 in itemized contributions, considerably less than the $1.6 million raised in Michigan, even though Ohio has a slightly larger and more Republican-leaning population. And in January, Mr. Romney brought in just $60,000 in itemized donations from Ohio, according to F.E.C. filings — less than the $65,000 Mr. Santorum raised that month.

Finally, Mr. Romney faces a different tactical situation in Ohio. In Michigan, his native state, a loss would have been seen as devastating — probably to the point where efforts to put a favorable spin on the outcome wouldn’t have done him much good.

In Ohio, by contrast, a loss (quite correctly, in my view, for all the reasons that I’ve outlined above) would be seen as more tolerable. While that could make Mr. Romney’s life easier — win or lose — after Ohio votes, it also means that he might find it in his interest to hedge his bets in the state rather than going “all-in,” especially with so many other states set to vote on March 6, Super Tuesday.