Last week, I made the case for why the “electability gap” between Rick Santorum and Mitt Romney might not be all that large. But there’s a contrary point to consider, one that would not necessarily work in Mr. Santorum’s favor.

One of the factors that our forecasting model uses in conjunction with presidential approval ratings and economic forecasts is a score to indicate the ideological disposition of the opposition candidate. Historically, candidates whose issue positions are closer to the center of the electorate tend to do a little bit better than the fundamentals would dictate; those who are closer to the extremes do somewhat worse.

There are various objective ways to measure candidate ideology, and the different systems tend to be in fairly strong agreement for Mr. Romney. He is neither a moderate nor is he extremely conservative, according to these ratings, but somewhere in between.

The ratings for Mr. Santorum, however, are all over the map. Without going into too much detail into how each system is calculated, there are some that deliberately place more emphasis on economic policy and others that weight economic policy and social policy more equally.

So if the general election is primarily about economic policy, Mr. Santorum may not be at much of a disadvantage to Mr. Romney. In fact, a case can be made that he’d be a little stronger than Mr. Romney based on Electoral College considerations. However, the more that social policy is emphasized, the more the electability gap could grow.

The ideology scores that the model uses, as I’ve mentioned, are somewhat deliberately slanted toward economic policy. There are several good reasons for this. First, the economy remains in pretty bad shape, although it is improving. Second, voters routinely indicate in surveys that they are much more concerned with economic issues than social ones. Third, the president probably has less influence on social policy than on economic policy. Social policy is often determined more through the courts and at the state level than through the executive branch.

To some extent, the emphasis that voters and the news media will place on these issues is likely to be dictated by economic conditions. Frankly, if issues like gay marriage and contraception are making headlines — rather than unemployment or gas prices or the European debt crisis — that will probably be a bullish sign for President Obama, since there is more bandwidth available to cover these issues when the economy is improving.

It is also true, though, that the amount of emphasis placed on economic issues versus social policy may be influenced by the Republicans’ choice of a nominee. If Mr. Santorum is picked, there will probably be relatively more coverage of social policy — both because he tends to place more emphasis on social issues himself, and also because the news media tends to focus on his social policy positions.

There are already some indications of this. When Mr. Santorum’s name is mentioned in news coverage, it tends to be associated with social issues more often than economic ones. The opposite is true for Mr. Romney.

Indeed, this pattern was typical. Mr. Santorum’s name was used more commonly in conjunction with 12 of the 15 social policy keywords; the exceptions were “guns” (or “Second Amendment”), “immigration” and “Mormon.”

However, Mr. Romney name was used more commonly in conjunction with all 15 of the economic keywords. 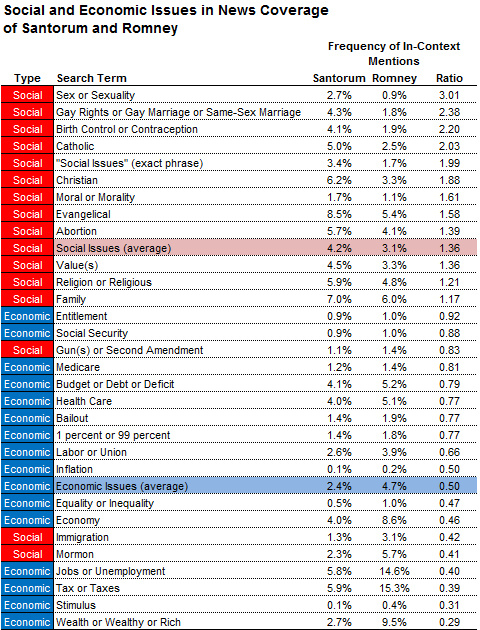 One of the biggest discrepancies was for the keywords “sex” and “sexuality”; those terms were used about three times more often in conjunction with Mr. Santorum’s name than Mr. Romney’s, adjusting for the overall amount of news coverage that each candidate received.

At the other end of the spectrum were a set of three keywords that I grouped together in the search: “wealth,” “wealthy” and “rich”. These were used about three and a half times more often in conjunction with Mr. Romney’s name than Mr. Santorum’s.

So if you want a somewhat jaundiced view of the associations that the news media tends to make disproportionately often with each candidate, it is this: Mr. Romney and the term “rich,” Mr. Santorum and the term “sex”.

Does this reflect news media bias of some kind — or is it a fair reflection of the emphasis that the candidates tend to place on these issues themselves?

That is not an easy question to address, but here is one approach. I looked up how often each of the candidates used the keywords on the “issues” sections of their respective campaign Web sites.

Both candidates used the economic keywords more often than the social keywords on their Web sites, but the disparity was greater in Mr. Romney’s case.

So the answer here is somewhat complicated. For both candidates, the news media coverage placed more emphasis on social issues than the candidates did themselves. I would need to think more carefully about the research design before conclusively labeling this a form of bias, but that is certainly one interpretation: the news media tend to place more emphasis on social issues than the candidates do — and probably also than most voters profess to, given how much economic issues dominate among voters across the political spectrum when they are asked to identify which issues are most important to them.

However, to the extent there is bias in the news media coverage, it is at least somewhat proportional to the respective stances of the candidates. Mr. Santorum does tend to place more emphasis on social issues than Mr. Romney — if not as much as the news media seem to think he does.

Still, this could put Mr. Santorum at a disadvantage. If he is the nominee, the coverage might tend to place more emphasis on social policy, where his views are further removed from those of the median voter.

It should be mentioned, however, that Mr. Romney is not as much of a social moderate as he is sometimes described — at least based on his current issue positions. In fact, if you look at public statements that Mr. Romney has made recently, they are nearly as conservative as Mr. Santorum’s on social issues: slightly less so on issues like gay rights, but slightly more so on others like immigration.

Some of this disconnect, of course, is because Mr. Romney’s positions on some social issues were formerly more moderate when he was running for office in Massachusetts. It may also be because of Mr. Romney’s tone: he is somewhat less strident than Mr. Santorum on social issues, even though they don’t differ very much when you examine their actual policy positions.

Nevertheless, Mr. Romney will probably have an easier time maintaining a focus on economic policy if he gets to the general election. Although the electability question between Mr. Romney and Mr. Santorum is debatable, that is a point in Mr. Romney’s favor.