The Gang Green contract dispute is over: Quarterback Ryan Fitzpatrick has re-signed with the New York Jets, on a one-year, $12 million contract with up to $3 million in additional incentives. Casual fans may wonder why it took so long for Fitzpatrick to re-sign — for months, it was clear that Fitzpatrick had no other suitors and the Jets had no exciting alternative. And, after all, Fitzpatrick was coming off of a strong statistical season. He threw for 3,905 yards last year — the highest single-season total by a Jets quarterback since Joe Namath in 1967 — and 31 passing touchdowns, a franchise record.

Perhaps most importantly, Fitzpatrick’s statistical output was far ahead of what Jets fans have come to expect from the position. Fitzpatrick averaged 6.46 adjusted net yards per attempt (ANY/A) last season, more than a yard better than any of the Jets’ starting quarterbacks over the previous decade. The chart below shows New York’s main QB each season from 2005 through 2015 and his average ANY/A. Fitzpatrick’s 2015 sticks out in a very good way: 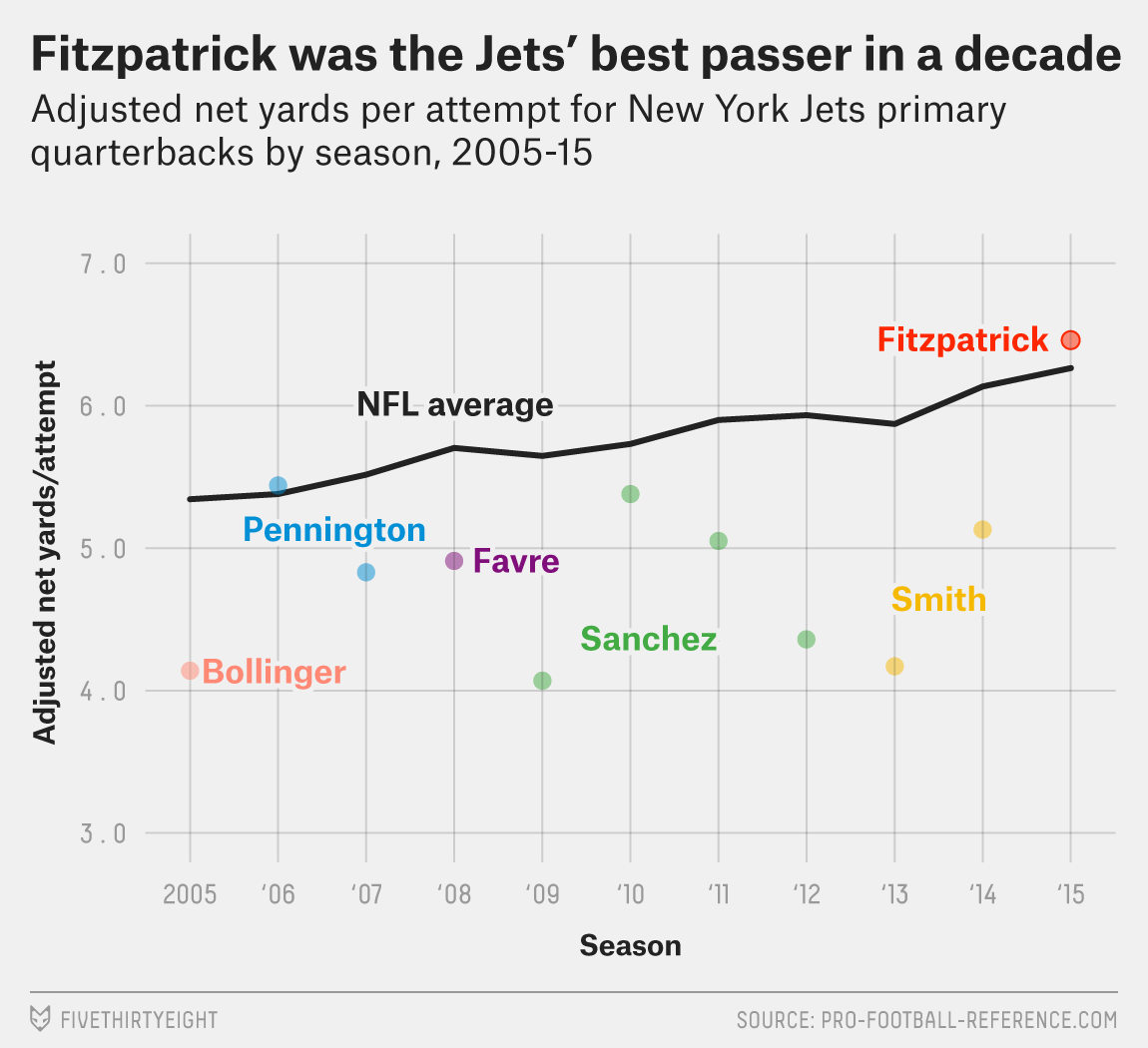 On the heels of six Mark Sanchez and Geno Smith seasons, Fitzpatrick’s competent play represented a vast improvement. But Fitzpatrick’s numbers really only look great relative to the poor passers of Jets history and thanks to the rising tide that is lifting passing numbers leaguewide.

Before Fitzpatrick, the Jets hadn’t experienced above-average quarterbacking since 2006, and Jets passers had been far below average in each of the four seasons leading into 2015. Against that backdrop, Fitzpatrick’s ever-so-slightly-above-average numbers painted the picture of a bearded savior. But although Fitzpatrick deserves credit for the strong season (along with, perhaps, offensive coordinator Chan Gailey), his top two receivers were just as responsible for the big year.

The Jets signed Eric Decker before the 2014 season, and he had a productive year, but he couldn’t save New York’s passing attack by himself. After New York traded for Brandon Marshall in 2015, though, the duo quickly turned into one of the best one-two receiving punches in the NFL. Together, Marshall and Decker combined for 2,529 receiving yards, second-most in the NFL behind Pittsburgh’s Antonio Brown and Martavis Bryant. Perhaps more importantly, Marshall and Decker also combined for 60.6 percent of all Jets receiving yards, easily the highest rate in the league for any pair of receivers:1

Marshall and Decker were also touchdown machines. In nine of the Jets’ 16 games last season, both Marshall and Decker reached the end zone: That made them the first pair of wide-receiver teammates to each score in nine games (and only the second pair of teammates, period, joining former Cowboys Emmitt Smith and Michael Irvin). Incredibly, Marshall and Decker by themselves caught 25 of Fitzpatrick’s 31 total touchdown throws, or 81 percent.

That difference of 2.8 yards per target between the Jets’ top two receivers and the rest of the team ranked third-largest in the NFL, behind two other teams that had star receivers doing most of the heavy lifting: Jacksonville (with Allen Robinson and Allen Hurns, at +3.7) and the New York Giants (thanks mostly to Odell Beckham Jr., at +2.9). Marshall/Decker’s rate of 11.7 targets for every touchdown also ranked fourth-best among top receiving pairings,2 but the rest of the Jets were targeted 42.4 times for every touchdown pass, the fourth-worst rate in the league for receiving groups outside a team’s top two targets.3 In other words, Fitzpatrick was putting up great numbers only when throwing to Marshall and Decker — not anyone else. It’s fair to say, then, that no passing game in 2015 was as reliant on its top two receivers as the Jets’ was.

Granted, the Jets’ other targets weren’t very good,4 so you would expect a large chasm in production between Marshall/Decker and the rest of the team. But that makes it more difficult to determine how much of Fitzpatrick’s numbers were the product of his own play, and how much was due to his top two targets. And that’s probably what caused such a disconnect between the Jets and Fitzpatrick’s camp during negotiations.

Ultimately, Fitzpatrick signed a reasonable one-year contract, so we may be revisiting the same scenario next offseason, with the Jets having to ascertain their QB’s true worth once more.