UPDATE (Nov. 13, 1:00 p.m.): Ronda Rousey defends her bantamweight title against Holly Holm this weekend in Australia. We wrote the story below before Rousey knocked out Bethe Correia in 34 seconds in August.

Ronda Rousey is the rare athlete who dominates her sport while transcending it. You might recognize her from a cameo in the recent “Entourage” movie, or maybe you read about her in The New Yorker. Or maybe you saw clips of her last fight — all 14 seconds of it.

But in case you’ve been living in a pacifist commune, know this much: Rousey is the best female mixed martial arts (MMA) fighter in the world. Top male fighters are wary of facing her. With an 11-0 record going into her much-publicized fight against Bethe Correia on Saturday, she’s arguably the biggest draw — man or woman — in the Ultimate Fighting Championship (UFC), the biggest MMA promotion league.

Beyond being simply “the best,” the former Olympian in judo — who, in the 2008 games in Beijing, became the first American woman to medal in the sport — is known for winning astonishingly fast. Her previous two fights lasted 30 seconds. Combined.

Plotted below is the winning percentage of 2,135 MMA fighters (men and women) who have won at least three fights.1 On the x-axis is what I’m calling a fighter’s “fight speed score” — a measure of how much time is left in the fights they won versus how much is remaining in the bouts they lost.2 On average, Rousey has won her 11 fights with 90 percent of the scheduled fight time remaining; only three of her fights took more than 66 seconds.3 Combined with her undefeated record, this blazing-fast track record makes her a Lionel Messi-like outlier. 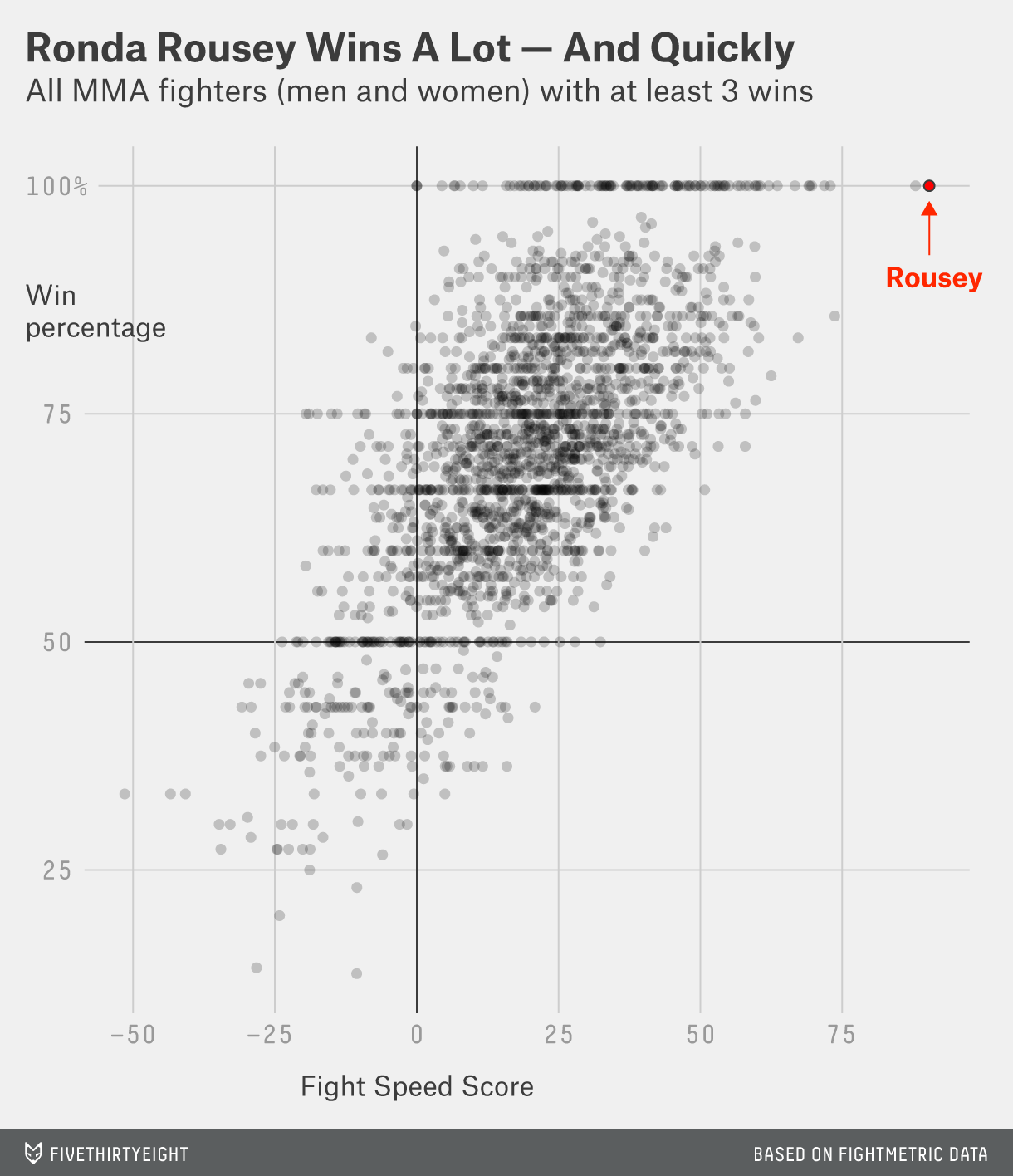 Rousey’s quick fights are totally counter to the MMA trend overall. In the early 2000s, the average fight in the three-round, five-minute format lasted about 400 seconds for men and less than that for women. But in 2015, the typical fight went nearly two rounds (or about 600 seconds).4 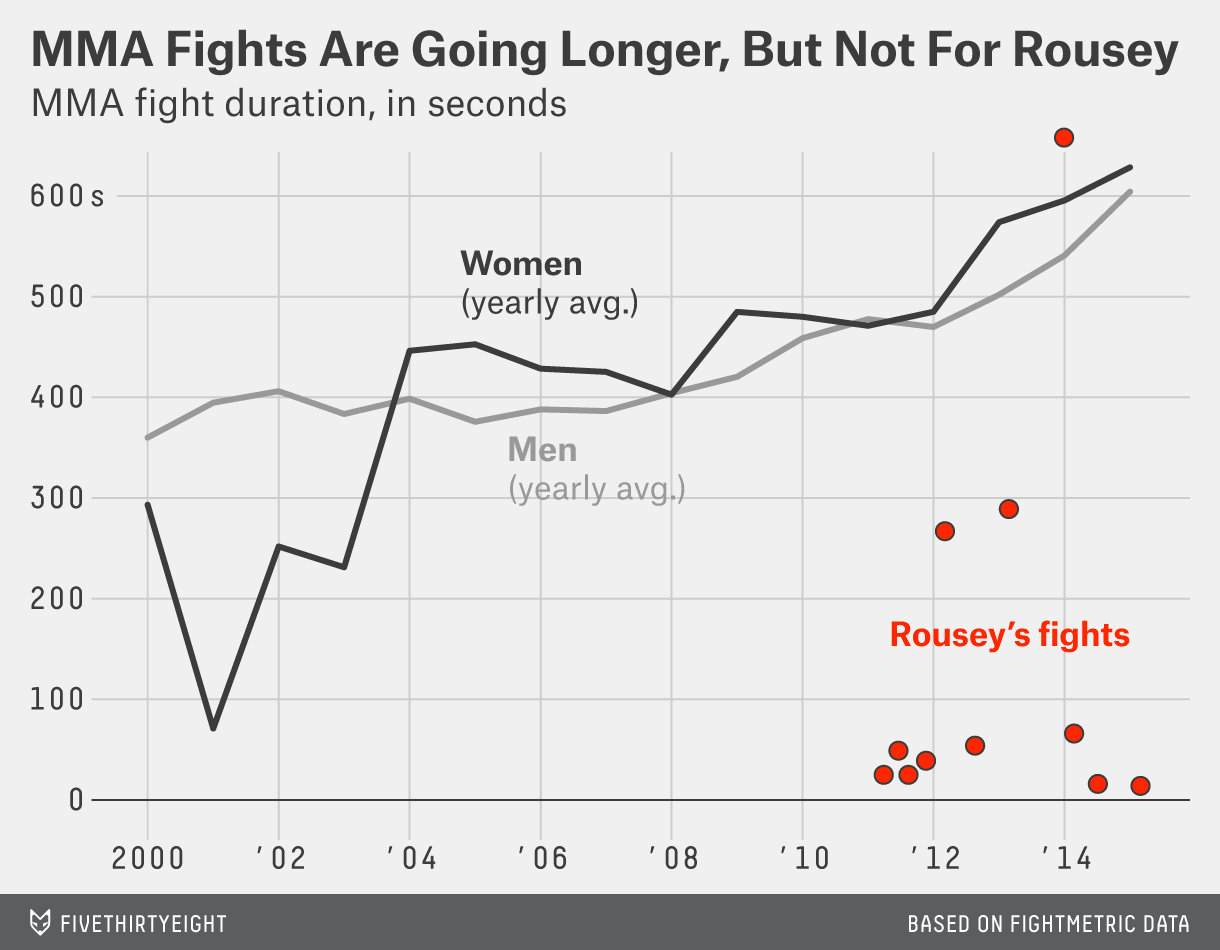 Longer fights might be a product of the changing nature of MMA. It’s likely that, as MMA has become more popular, the competitive parity has risen too. And so it’s possible that fighters, facing more fearsome and equally matched opponents, are tweaking their tactics to be more risk-averse — to bide their time for an opportunity to strike, rather than coming in with the all-out aggressiveness that characterized the early days of the sport. Whatever the reason, today’s fighters don’t end fights like they used to.

In the MMA of the past, fights were most likely to end when a fighter knocked another unconscious or twisted an opponent’s limb until he said “uncle” — but those days are over. Instead, MMA fights increasingly end with both fighters standing, which forces judges to make the call. There are essentially three ways a fight can end: a decision, a knockout (KO) or technical knockout (TKO), or a submission, which is when a fighter verbally or physically “taps out,” usually by being in a vulnerable position such as a chokehold.

This is what’s happened to those three outcomes over the past 15 years: 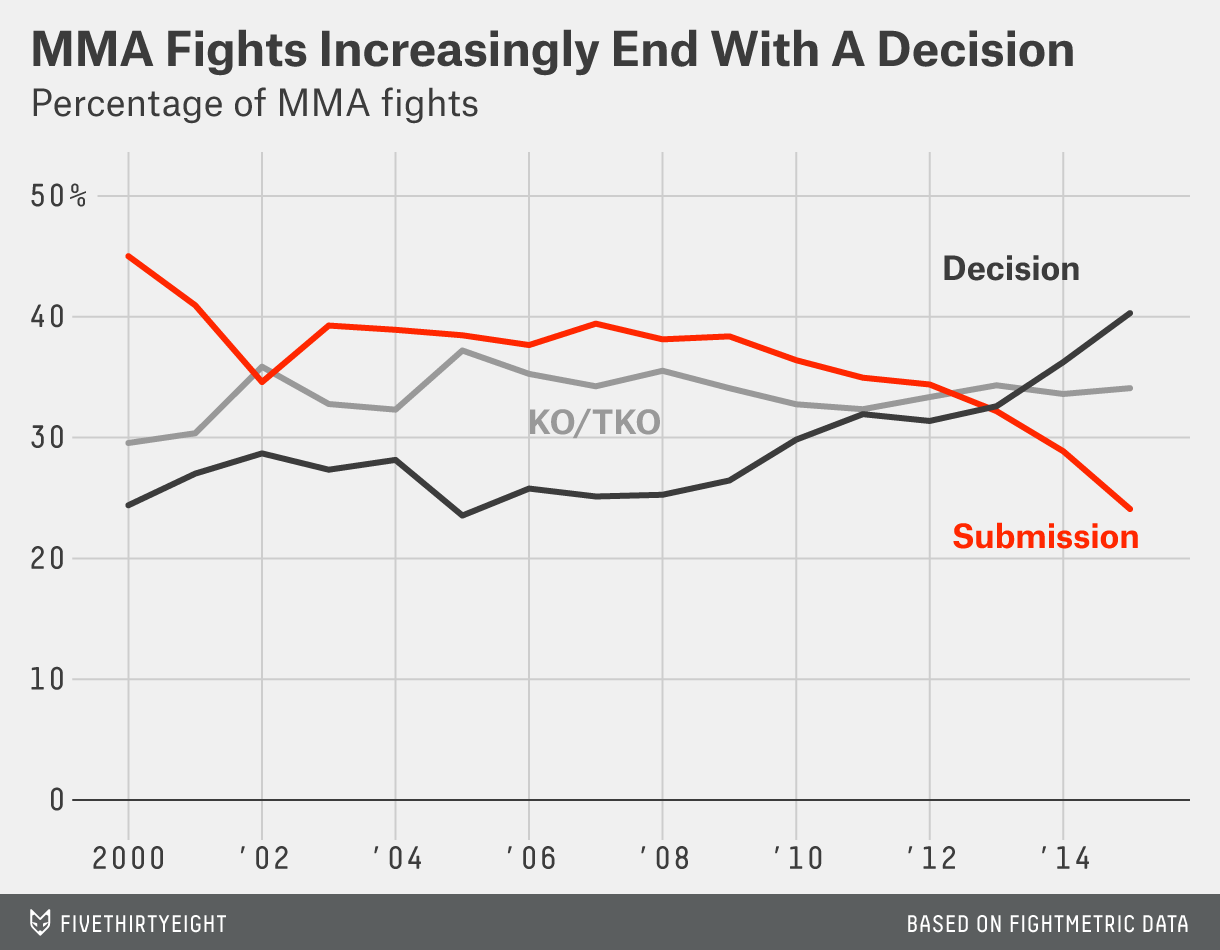 Submissions are down from about 45 percent of all fights in 2000 to 25 percent in 2015.5 That more fights end with a decision explains the longer fights, and could be a reflection of improving competitive parity in the sport. There are fewer instances of pros quickly pummeling their opponent.

But Rousey is an exception. She has won all her fights by a submission or KO. Rousey has won nine of her 11 fights with the “armbar” submission — a move where Rousey hyperextends her opponent’s elbow, causing excruciating pain and sometimes gruesome results.

And, interestingly, among fights ending in a submission, fewer are done with an armbar. 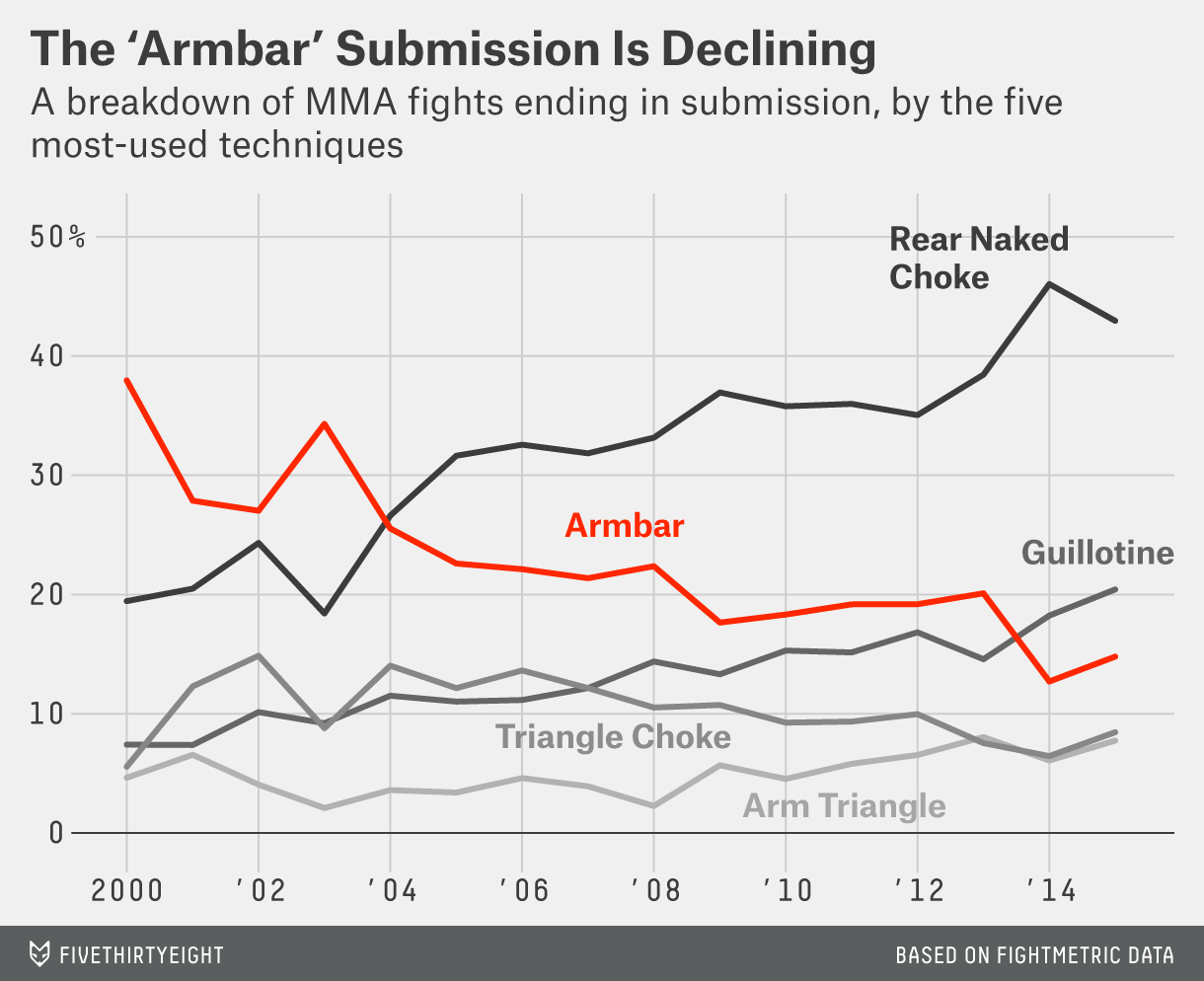 Although Rousey’s ways of winning are increasingly at odds with MMA trends, bettors seem to be confident she will continue winning. The betting odds from the Westgate Las Vegas Superbook put Rousey as a -1700 favorite against Correia (as of July 27). So one must bet $1,700 on Rousey to net $100 if she wins. She’s still a huge favorite. But Correia is also undefeated (9-0) and has beaten two of Rousey’s training partners.

Rousey’s dominance has been a boon for MMA — and for female athletes more broadly. There’s no use resisting it. Just submit.