The forecast model I’ve been using in conjunction with a set of New York Times magazine articles suggests that Mitt Romney is likely to fare better than Rick Santorum in the popular vote against Barack Obama. Specifically, the model would give Mr. Romney a 40 percent chance of winning the popular vote against Mr. Obama given G.D.P. growth of 2.5 percent this year (in line with the most recent forecasts), but Mr. Santorum just a 23 percent chance.

Mr. Romney’s comparative advantage in the model is based on a set of four objective indicators of candidate ideology, which suggest that Mr. Santorum is further from the center of the electorate on balance — an unfavorable factor historically.

Suppose you accept that candidate ideology matters and the model does a reasonable job of accounting for it. This should not be taken to imply that other factors related to the candidates are irrelevant. My view, instead, is that the political science literature sometimes gives short shrift to “candidate quality” factors in general. Ideology happens to be one factor that we can measure somewhat well — at least as compared to something like “charisma” — but it is plausible that there are other factors that outweigh it.

In fact, the “electability gap” between Mr. Romney and Mr. Santorum that the model posits is not all that great. Specifically, it estimates that Mr. Romney’s more moderate ideology is worth a net of about 3 points in the popular vote — so an election that Mr. Santorum would win by 4 points, Mr. Romney would win by 7. The reason it looks bigger in terms of their respective odds against Mr. Obama is because the election is still projected to be fairly close over all, in which case any small advantage or disadvantage can be meaningful.

In the magazine article, I argue that one such small factor that could work against Mr. Romney — and possibly in favor of Mr. Santorum — is the Electoral College. A Republican candidate who does poorly with working-class white voters has an extremely tough electoral map because those voters tend to be concentrated in swing states, especially in the Midwest, whereas wealthier whites tend to be concentrated in noncompetitive states, especially on the coasts.

Indeed, there is some evidence that Mr. Romney is having trouble with just these sorts of groups. In the recent Pew poll, Mr. Romney trailed Mr. Obama by 11 points in the Midwest — worse than his overall 8-point deficit. And he got just 42 percent of the vote among whites whose families make less than $30,000 per year, worse than the 46 percent that John McCain got in 2008.

Suppose that Mr. Obama wins all of the Midwestern states that he carried in 2008 other than Indiana, which may have been something of a fluke since Mr. McCain’s campaign essentially ignored the state. But he does win Michigan, Pennsylvania, Ohio, Illinois, Iowa, Wisconsin and Minnesota.

With victories in these states, plus the Democratic base states that the party won in 2000 and 2004, Mr. Obama would already have almost enough electoral votes for victory. Specifically, he’d have 266 electoral votes, just 4 away from the 270 that would guarantee him another term. 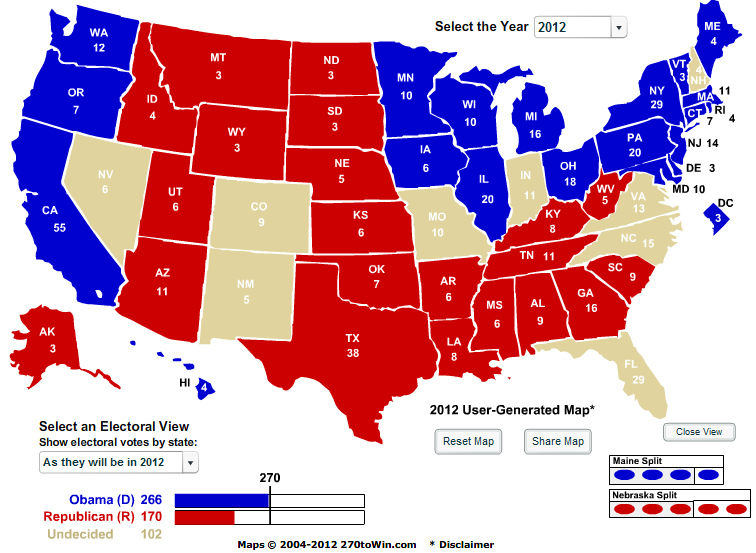 Mr. Obama would have a ton of options for where to procure those votes. He could do it in the South (Florida, North Carolina or Virginia), the West (Nevada, New Mexico or Colorado) or the Northeast (New Hampshire). For that matter, he could also do it entirely in the Midwest, by winning either Indiana or Missouri.

On the other hand, suppose that Mr. Obama were to win all of the swing states outside the Midwest, but in the Midwest, he came up short, winning only his home state of Illinois. This would leave him just shy of a victory, with 267 electoral votes. 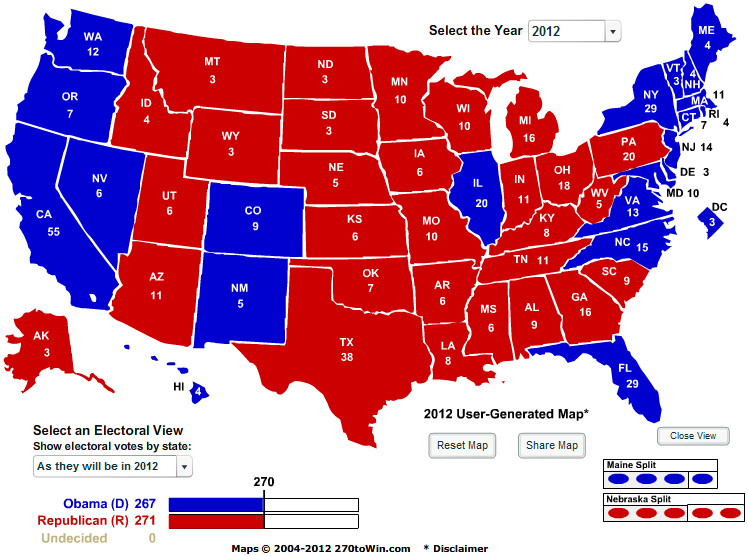 For that reason, if Mr. Santorum and Mr. Romney look as though they’d do about as well the other in the Midwest, much of Mr. Romney’s electability advantage dissipates. And a candidate who gets 49 percent of the vote nationally but 51 percent in the Midwest would arguably be better than one for whom the reverse is true.

Also, Mr. Santorum might do more to motivate the Republican base than Mr. Romney. The difference isn’t likely to be large, but if we’re looking at things that might make a marginal difference of 1 or 2 points, it is worth thinking about.

There are also factors that would work in Mr. Romney’s favor. He is likely to raise more money than Mr. Santorum, as he has so far in the primary. As Philip Klein notes, Mr. Santorum might be more vulnerable to losing votes to a libertarian candidate (Gary Johnson or, less likely, Ron Paul). Mr. Romney is probably somewhat better vetted than Mr. Santorum at this point.

And the metrics the model uses to estimate ideology place more emphasis on economic policy than social policy. If social issues became more pertinent in the campaign, the ideology gap could be larger. (Then again, if Republican candidates are spending time debating social issues rather than the economy, it may be a sign that economic conditions have improved enough that Mr. Obama is likely to win anyway.)

The point is simply that this is a debatable case — more so, say, than a comparison of Mr. Romney and Newt Gingrich might be. Also, a party is within its rights to consider factors above and beyond electability. A small additional chance of losing the general election to Mr. Obama might be deemed an acceptable risk if Republicans think Mr. Santorum would be more reliably conservative once in office.

If the electability issue becomes debatable rather than being taken for granted as an advantage for Mr. Romney, he could find himself in some trouble.

In the recent CNN national poll, 55 percent of Republican voters said that Mr. Romney was the most likely candidate to defeat Mr. Obama, while just 18 percent said the same for Mr. Santorum. This was despite the fact that Mr. Santorum actually led Mr. Romney by 2 points in the poll over all.

Isn’t that a favorable factor for Mr. Romney? Actually, it may not be. The reason is that this electability edge is presumably priced into Mr. Romney’s stock — and is some of the reason that he is keeping things close. Were the issue to become more debatable in the eyes of Republican voters, he might begin to trail Mr. Santorum by a fairly large margin. And the issue is likely to be more hotly debated if Mr. Romney loses states like Michigan and Ohio, which are crucial in both the primary and general election.