Mitt Romney has run a smooth, low-drama campaign so far, but its aggressive posture toward Rick Perry within the past week leaves me wondering about his strategic choices.

On Tuesday, at the Republican debate in Las Vegas, Mr. Romney was baited by Mr. Perry, who accused Mr. Romney of employing illegal immigrants at his home. But Mr. Romney responded with equal rhetorical (and almost physical) force rather than turning the other cheek.

On Wednesday, Mr. Romney released another ad — this one mocking Mr. Perry’s debate performances and somewhat misleadingly, splicing in an introduction to Tuesday night’s debate in Las Vegas with pundit reaction to previous debates. (Mr. Romney’s campaign later pulled the ad after what it said were objections from CNN.)

Mr. Romney is right if he thinks that Mr. Perry remains the biggest threat to taking the Republican nomination from him. I say this as someone who takes Herman Cain’s chances fairly seriously and recoils at the frequent assertions without evidence that he has no chance of winning the nomination. But Mr. Perry’s advantages in terms of the fundamentals — his fund-raising, his respectable number of endorsements, his credentials and experience — are enough to outweigh Mr. Cain’s edge in the polls, especially at a time when most voters remain weakly attached to their current choices.

But it is precisely because Mr. Perry is the more threatening candidate that Mr. Romney might want to think twice about helping to position Mr. Perry as the “anti-Romney” choice — a valuable piece of real estate that candidates from Mr. Perry and Mr. Cain to Tim Pawlenty and Jon M. Huntsman Jr. have long tangled over.

Part of this is simply that any type of negative campaigning tends to entail more risk than positive campaigning, and candidates with as strong a strategic position as Mr. Romney’s should be loath to take risks.

The attack on Mr. Perry’s jobs record, for instance, which argued that many of Texas’ new jobs were in government or were taken by illegal immigrants, might be valuable if Mr. Perry had soared to the lead on the issue and Mr. Romney’s campaign had to deflate his momentum. But Mr. Perry had been struggling to get any favorable attention at all.

Take the presence that Mr. Perry has had in the debates, for instance. I developed a simple way to track this, by counting the number of times that each candidate’s last name appeared in the transcript of the debate. Upon entering the race, Mr. Perry was the center of attention, getting 27 percent of the mentions in his first debate in Simi Valley, Calif., and 25 percent at the next one in Tampa. That figure dropped down to 10 percent, however, at last week’s debate in Hanover, N.H., with Mr. Cain getting almost twice as much face time. 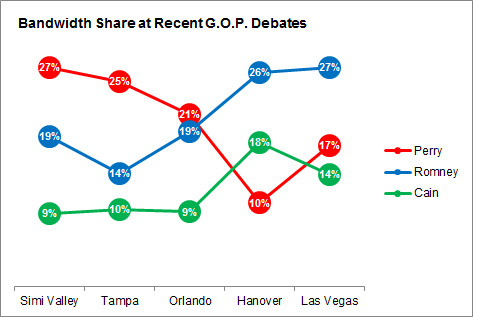 In other words, Mr. Perry’s campaign was in some danger of dying with a whimper rather than a bang. This was by no means certain or even necessarily all that likely — but it was at least a distinct possibility that Republicans would simply dismiss him as being ill-prepared, unelectable or both, and instead have Mr. Cain or even Newt Gingrich (perhaps perfunctorily, perhaps not) play the anti-Romney role. This possibility was a freebie for Mr. Romney — there was a high upside to having someone like Mr. Cain serve as your major opposition, and it required essentially no risk or effort on Mr. Romney’s behalf.

But that seems less likely now. In Tuesday night’s debate, Mr. Perry’s share of mentions rebounded to 17 percent — below Mr. Romney’s but ahead of all of the others, including Mr. Cain. And with the clip of his dust-up with Mr. Romney over immigration being played in frequent rotation, his share of post-debate coverage has been higher than that.

There is some reason to think that Mr. Perry could also rebound in the polls. His debate performance, although mixed on the merits, got a relatively favorable reaction from high-traction conservative outlets like RedState.com, The Washington Examiner and National Review, who seem now to be regarding him more sympathetically rather than as the sequel to Fred Thompson. Meanwhile, Mr. Cain’s campaign has had a tough week after a set of confusing answers on the nonnegotiable conservative issue of abortion rights. His supporters, many of whom were “taken” from Mr. Perry’s column, may soon be coming up for air again.

Mr. Romney’s campaign got a bit of a reprieve on Thursday when there was some real news for a change — the death of Col. Muammar el-Qaddafi.

But why give Mr. Perry a helping hand? The developments remind me of a similar sequence during the Democratic primaries in 2007. After a tough series of questions during a debate — also on the issue of immigration — at which Hillary Rodham Clinton appeared as rattled as she had been up to that point in the race, her campaign released a series of somewhat petty attacks on Barack Obama, who trailed her by roughly the same margin in the polls that Mr. Perry now trails Mr. Romney.

The attacks helped to elevate Mr. Obama above John Edwards and the other Democratic candidates, while taking some of the sheen off Mrs. Clinton’s aura of inevitability.

Mr. Romney’s campaign is still several mistakes away from melting down as some of Mrs. Clinton’s advisers seemed to do. But a 10- or 12-point polling lead is nothing given the high velocity of polling this early in a primary, and the campaign could revert back to toss-up status more easily than you might think.