We continue our Presidential Geography series, a one-by-one examination of each state’s political landscape and how it’s changing. Here is a look at Idaho, the Gem State. FiveThirtyEight spoke with David Adler, director of the Andrus Center for Public Policy at Boise State University. 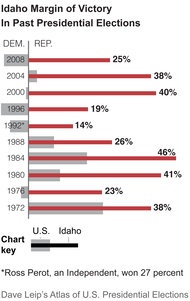 Idaho is a red state. It’s a really red state. It is rural, socially conservative and overwhelmingly white. Its electorate is mostly anti-abortion, anti-union and anti-federal government, Mr. Adler said.

Idaho hasn’t voted for a Democratic presidential candidate since 1964, and it is about twice as Republican-leaning in presidential elections as Mississippi.

“Idaho has been a dark, grim landscape politically for Democrats for some time,” Mr. Adler said.

And this year’s presidential election is likely to be even worse for Democrats.

According to the current FiveThirtyEight forecast, Idaho will be one of the states where Mr. Romney improves on Senator John McCain’s 2008 performance by the largest margin. Utah tops that list, followed by Wisconsin, Nevada, Connecticut, Michigan and then Idaho.

In Utah, Idaho and Nevada, however, it’s religion. Mr. Romney is a member of the Church of Jesus Christ of Latter-Day Saints, and those three states have the three highest percentages of Mormons.

In Utah, 67 percent of residents are L.D.S. members, according to a Gallup survey. Idaho is second with 21 percent, and Nevada is tied for third with 9 percent.

The evidence is circumstantial, but it suggests that Mr. Romney’s faith has helped him in states (Idaho and Utah) that he was never going to lose, and a state (Nevada) where he was going to lose by too much to make a difference. Although if the race tightens up nationally, Mr. Obama’s lead in Nevada is likely to narrow as well. And if the race were closer in Nevada, an increase in the Mormon vote could be enough to tip the state in his favor. (We’ll have more on Nevada later in this series). 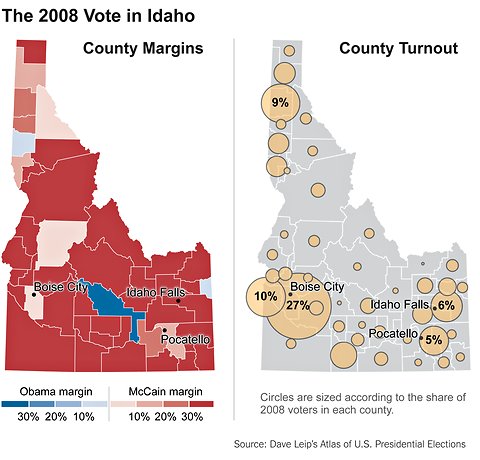 One might expect Mr. Romney’s faith to have more of an impact in states with large L.D.S. communities. But  Mormons have always been among the most Republican-leaning religious groups, according to the Pew-Forum on Religion & Public Life. In 2010, Mormon voters identified as Republicans over Democrats by about 3 to 1.

The conservatism of L.D.S. voters is evident in southeastern Idaho, which borders Utah and is the most heavily Mormon part of the state. Mr. Romney won by large margins there in Idaho’s Republican caucuses this year.

Most of southeastern Idaho is incredibly conservative. “Democrats hope to keep Republican numbers down to 65 percent in the southeast,” Mr. Adler said.

The southwest, known as the Treasure Valley, is centered on Boise, the state’s main population hub. Boise has been a high-tech center ever since Micron Technology started there in the 1970s. Micron is still the largest employer in the state, Mr. Adler said, although it laid workers off during the recession.

Treasure Valley has attracted an influx of left-leaning migrants from the East and West coasts, as well as migrants from Latin America. The demographic changes have made Boise’s Ada County more competitive politically.

“The Treasure Valley is the best opportunity that Democrats have,” Mr. Adler said.

But the rapid population growth in Idaho over the last two decades — the state grew from one to 1.57 million residents from 1990 to 2010 — has been mixed politically. While Ada County is more competitive, Boise is still a conservative city as far as cities go; Senator John McCain won a slim majority in Ada County in 2008. Conservative migrants from places like Orange County, Calif., have moved to Idaho, too, drawn to the state’s clean air, lax business regulations and family-friendly ethos.

While Democrats are slowly making gains in the southwest, they have lost ground in northern Idaho, known as the Panhandle. The Panhandle — once a major mining region — was traditionally Democratic-leaning. Unions were powerful. But over the last three decades, mining has receded as an economic driver in Idaho, and Idaho became a “right to work” state in 1985. 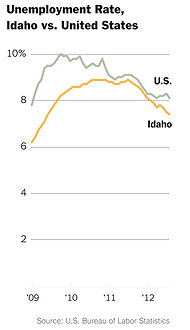 The Panhandle is now mostly Republican, except for Latah County, home to the University of Idaho in Moscow. Latah County is one of just three counties Mr. Obama won in 2008.

The only truly bl
ue county in Idaho is Blaine County in the Magic Valley. Blaine County includes the ski-resort city of Sun Valley and next-door Ketchum. Both towns have attracted affluent, liberal transplants from other states.

Kootenai County, anchored by Coeur d’Alene, is an emerging bellwether in Idaho. Historically the center of a region with a natural resources-based economy, Coeur d’Alene is now also a tourist destination, Mr. Adler said. And Kootenai County has reflected the political shift in Northern Idaho generally — once Democratic, now Republican.

Mr. Romney is a 100 percent favorite to carry Idaho, according to the current FiveThirtyEight forecast. It’s hard to overstate just how Republican Idaho is. The state has had Democrats in office, notably Cecil D. Andrus, the governor from 1971 to 1977 and again from 1987 to 1995, and Frank Church, who was a United States senator from Idaho from 1957 to 1981.

But those days seem largely over. Idaho is now thoroughly Republican.

The one trend in Idaho that Democrats can pin their hopes to, Mr. Adler said, is the state’s growing Hispanic population, which is nearing 12 percent, according to the Census Bureau. Agriculture is a dominant industry in Idaho; the state produces about a third of the nation’s potatoes (about 60 percent of Idaho potatoes go to making french fries).

Those agricultural jobs have attracted Hispanic workers, and will likely continue to. But it may be a long time before that has any real effect on the politics of the state.