If Bob Novak is circulating internal polls showing Mitt Romney helping John McCain in Michigan, you can be pretty sure that the Republican establishment is behind the idea of making Romney McCain’s VP. It’s easy enough to understand why. Romney has been a good team player: an excellent fundraiser and a tireless campaigner. He is unlikely to embarrass either himself or the ticket. And he could potentially be an asset in several states, among them Michigan, New Hampshire and Nevada.

But Romney also comes with several liabilities which, when combined with his strengths, would tend to produce a very interesting electoral map.

One of the more reliable indicators we have identified for electoral strength is a candidate’s fundraising numbers. Mitt Romney raised quite a bit of money — about $60 million from individual contributors, of which $48 million came in large enough chunks to require disclosure to the FEC. Thus, we can look at Romney’s fundraising totals in each state.

As a basis for comparison, we will use George W. Bush’s fundraising haul in 2004, which included about $190 million in individual contributions that were large enough to be tallied by the FEC. Overall, Romney raised about 25 percent as much as Bush (again, counting only those contributions that the FEC itemized). But the ratio varied significantly from state to state. Romney raised just 2 percent as much as Bush in Arkansas, but 972 percent as much in Utah. A complete accounting of the Romney v. Bush numbers is below; states where we presently project the McCain-Obama matchup to finish within 6 percentage points are highlighted in yellow. 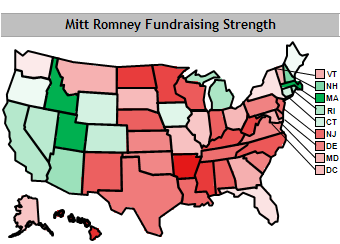 From these figures, we can make some pretty good inferences about where Romney’s strengths might lie:

— The Mormon Belt. Romney, unsurprisingly, does exceptionally well in states with with large concentrations of Mormons. Unfortunately for him, some of these states — like Utah and Idaho — are utterly irrelevant electorally. But he might also be of some assistance in Nevada, Colorado, and possibly Oregon, though the latter may not be close enough for it to matter. He is not of much help in New Mexico, which has distinctly different demographics from the rest of the region and where Romney’s lack of popularity among Hispanic voters might be a liability.

— Michigan. Romney’s fundraising numbers in Michigan were strong, and he would probably be an asset there. Although, his impact seems to stop at the Michigan border; Romney did not do especially well in any of the states surrounding the Wolverine State.

— New England. Romney’s fundraising was also relatively strong in Massachusetts, New Hampshire, Rhode Island and Connecticut. Of these, probably only New Hampshire is competitive, but those are four fairly important electoral votes. I am not sure, by the way, how much of this really has to do with Romney’s tenure as governor of Massachusetts, where his approval ratings had been marginal. Instead, there are a fair number of fiscal conservatives in New England, among whom Romney’s business background might have some appeal.

In contrast, Romney might be a liability in some other regions:

— The South. Romney’s fundraising numbers were quite bad in the South, where he generally matched no more than 10 percent of George W. Bush’s fundraising total. He would probably be a modest liability in Virginia, and might put states like North Carolina, West Virginia, and possibly Georgia and even Arkansas further into play. The problem, simply put, is that Romney’s Mormonism is anything but an asset to Evangelical Protestants. In 14 states that SurveyUSA polled in January and February, before Romney dropped out of the race, John McCain beat Barack Obama by an average of 33 points among evangelical voters. Romney, by contrast, led Obama by just 18 points. Although it is unclear just how many of these evangelicals would defect to Obama in the end, the Republicans would have significant concerns over those voters not turning out, or voting for Bob Barr.

– The Upper Midwest, Sans Michigan. Romney’s fundraising totals were very marginal in Wisconsin, Minnesota, North Dakota and Indiana — though Iowa, where Romney spent the better part of a year campaigning, was a modest exception. These states tend to place a heavy value on authenticity, and Romney’s polish is a poor match for the Midwestern aesthetic. Wisconsin and Minnesota, already difficult states for McCain, might be placed further out of reach if Romney were on the ticket, and Indiana and North Dakota might present more substantial opportunities for Barack Obama.

– New Mexico and other Hispanic-heavy states. Romney performed quite poorly among Latino voters in the Republican primaries. He won just 23 percent of their votes in Arizona (versus 35 percent of the white vote), 14 percent in Florida (versus 34 percent of whites) and 27 percent in California (versus 38 percent of whites). Although Romney’s tough stance on illegal immigration is part of the reason he might be helpful to McCain in states Colorado, he might do more harm than good in states where the Hispanic population is a little larger, such as New Mexico and possibly Florida.

Overall, placing Mitt Romney on the ticket would tend to produce a very broad map. Several “Lean Democratic” states — Michigan, Colorado, New Hampshire — would tend to be pushed closer toward toss-up status. But likewise, there are areas where Romney might be harmful, and some “Lean Republican” states — North Carolina, Indiana, North Dakota — could also become toss-ups. We might also have to give more consideration to scenarios in which Barack Obama loses both Michigan and Ohio (although, there is no reason to think Romney will be especially helpful in Ohio) but comes up with a winning electoral combination, most likely through gains in the South. For example, Obama could lose both Michigan and Ohio (and still reach 270 electoral votes) if he won both Virginia and Florida. He could also lose both Michigan and Ohio if he won Virginia, North Carolina and Iowa.

Obama could also try and counterprogram Romney by means of his own Vice Presidential selection. However, it is not clear whether such a strategy would involve playing offense or defense. Obama could conceivably pick a Westerner like Brian Schweitzer in an effort to offset Romney’s gains in the West; this would be a defensive strategy. Or, he could pick a Southerner to try and exploit his opportunity in that region; this would be the more aggressive maneuver. There might be some utility in his avoiding a Catholic candidate in an effort to expand his reach to evangelicals, however, a disproportionate number of the Democratic VP contenders are Catholic (including Biden, Kaine, Sebelius, Clark, Schweitzer and Reed). There might also be some utility in picking a candidate who performs strongly among working class voters, as Romney’s background and personality make him more appealing to the country club set. Hillary Clinton, frankly, would be a pretty interesting choice on paper (John Edwards would be even better if his alleged scandal does not prove to be a problem) as might a darkhorse choice like Sherrod Brown. Evan Bayh, who has a +29 approval rating among evangelicals in Indiana, might also be a fairly good fit.

As for the McCain team, they have ample reason to select Romney, but they need to understand that his strengths don’t necessarily match the conventional wisdom. Romney’s base tends neither to be evangelicals nor Reagan Democrats, but instead, middle- and upper-class fiscal conservatives who value lower taxes and stricter immigration policies and who are probably relatively satisfied with the status quo. This describes a significant number of independent voters in states like Colorado. However, if the Republicans throw Romney out there and try to turn him into a populist, they’ll be in for a long campaign.